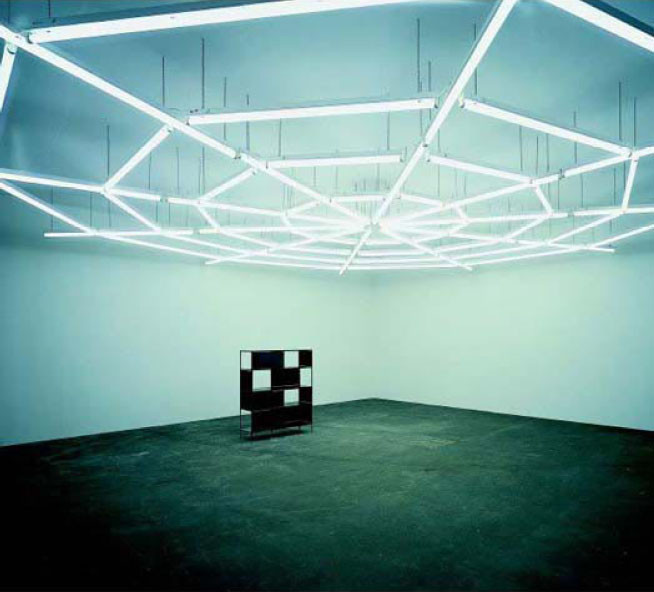 AN INNOVATIVE CARTE BLANCHE
Giving an internationally renowned artist carte blanche is a key idea that emanates from the director of the Palais de Tokyo, Marc-Olivier Wahler. Placed at the centre of the decision-making process determining the programming of the Palais de Tokyo, the artist is free to concoct an entire exhibition. His or her vision is given an auspicious setting and sufficient time to develop into a visual arts world that is always unique. As well as offering a kind of map of the artist's brain, desires and influences, giving carte blanche to an artist provides an opportunity to approach the processes of creation and aesthetic cross-referencing from a novel angle. Artists are never where we expect them to be. They look at our reality, our everyday life, but also the works of their contemporaries, in a unique and enlightened way.

A UNIQUE ARTISTIC GESTURE
With THE THIRD MIND, Ugo Rondinone offers us a unique journey. An MRI scan of his influences, inclinations and obsessions, the exhibition is constructed as a stroll through a brain in perpetual activity, going straight to the source of the artist's references and discoveries. For the first time his gift for building systems of connections – an aptitude which has made Ugo Rondinone famous – is placed at the service of the works of other artists, not his own. The systems of connections activated as well as the artists and works chosen make THE THIRD MIND an exhibition that no curator/art historian would ever have been able to dream up.

THE THIRD MIND
William S. Burroughs, the cult writer of the Beat Generation, and the artist Brion Gysin worked out the cut-up method which consists of cutting up and reassembling various fragments of sentences to give them a completely new and unexpected meaning. The Third Mind is the title of a book they devised together following this method; they were so greatly impressed by its contents that they felt it had been composed by a third person, a third author, a synthesis of their two personalities. 1+1 = 3. In homage to this book which was never published, Ugo Rondinone sets out to cut up and remix the contemporary artistic landscape to allow a new meaning to emerge from it. THE THIRD MIND, composed from the assembled works of thirty-one different artists, constitutes a fully fledged work in its right, a new, spectral work created by a third mind, a third artist, the product of the meeting between Ugo Rondinone and his selections.


THE EPILOGUE TO OUR FIRST SEASON
Closing our first season which started a year ago, THE THIRD MIND constitutes the final episode in a train of thought exploring territories that are as disconcerting as they are heterogeneous, but are nonetheless united by one and the same idea : getting shot of the "window vision" of art, which regards exhibitions and works as fixed points in time and space. Each episode of this first season integrates the notion of programming conceived of as a cursor, and is set in a scenario based on the multiplication of interpretations, the decompartmentalization of intellectual and aesthetic categories and the constant questioning of the bridges between art and our reality. From an open space (FIVE BILLION YEARS) to a private space (THE THIRD MIND), from a proposal put forward by a curator (Marc-Olivier Wahler) to the visions of an artist (Ugo Rondinone) by way of artist curators (Peter Coffin and Olivier Mosset), from collective exhibitions to solo exhibitions, the year ends with an exhibition where – as in the first episode – every work is inscribed in a whole that is greater than its parts, so contributing towards founding a paradoxical identity that is strong yet elusive. Thus this first season will have seen the very concept of the exhibition – and the entire Palais de Tokyo along with it – slipping, changing, metamorphosing and relentlessly questioning the "schizophrenic quotient" of art.

LES JEUDIS /
Impossible to explain an exhibition that refuses to be explained, to repeat the words of Ugo Rondinone, even if everything obliges us to do so, to repeat those of Samuel Beckett* - as much the wish to understand as the duty to communicate understanding. But we can at least try to remain firmly within the absence of explanation. We can make an effort to inhabit the fact of being stunned, or stoned. Drugs, altered states of consciousness, and rather abrupt landings after trips... Precisely, the Beat Generation, conjured up through the emblematic figures of Brion Gysin and William S. Burroughs by Ugo Rondinone, is inseparable from such an experience. In the programme of cultural events that accompanies The Third Mind and the documents and educational activities offered to the public we have attempted to provide visitors with guidance to the country of highs and lows, on a journey taking them from cut-ups to bad trips, from psychedelism to paranoia, from visions to nightmares, from astral bodies to the "international conspiracy of lies" (Burroughs), in short, from the utopian Sixties to the darker Noughties.
Mark Alizart

Robert Breer
A choice of films by Ugo Rondinone of the American master of experimental animation.
25 octobre 2007 / 19h30

Bad trips
A little story of Beat drugs and of their effects on the arts, by Christoph Grunenberg, Tate Liverpool director and curator of Summer of Love.
29 novembre 2007 / 19h30