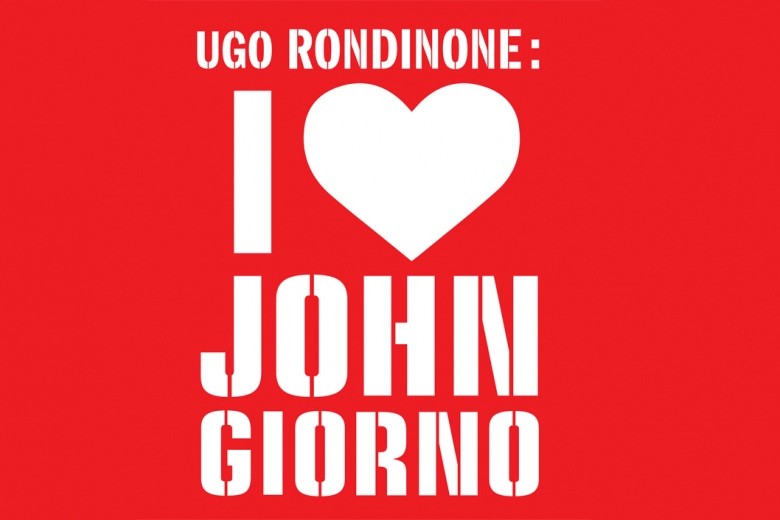 ‘In the early 1960s, I had the good fortune of meeting a lot of artists. Andy Warhol, Jasper Johns, Robert Rauschenberg, John Cage, Trisha Brown and Carolee Schneeman. These artists and painters were the real influence on me, as a poet. Whether it was a performance or a painting, they did what arose in their minds, and made it happen. It occurred to me that poetry was seventy five years behind painting and sculpture and dance and music. I said to myself, if these artists can do it, why can’t I do it for poetry?’ (1) John Giorno

"UGO RONDINONE : I ♥ JOHN GIORNO" is the first retrospective of the life and work of the American poet John Giorno (born 1936, lives and works in New York), a key figure of the American underground scene of the 1960s. The exhibition is conceived by Swiss artist Ugo Rondinone (born 1964, lives and works in New York) as a work in its own right. ‘I structured the exhibition in eight chapters, each representing a layer of Giorno’s multifaceted work. Taken as a whole, they reflect how he works and help us to understand the dual influences that American culture and Buddhism had on his life and art,’ (2) Rondinone explains.

Giorno was an iconic character in Andy Warhol’s early films who found inspiration in the appropriation of found images by Pop artists and captured the real-life colloquial language of advertisements, television, newspapers and street slang. A leading figure in the lineage of the Beat Generation, he revived the genre of ‘found poetry’ and worked to make poetry accessible to all.

Since the mid-1960s, Giorno has developed viral strategies to share poetry with as many people as possible. In 1968 he created Dial-A-Poem, a telephone service offering random access to poems, sound artworks, songs and political speeches. A new version of the work will be accessible for free on the phone number 0800 106 106* (from 19th October 2015 to 10th January 2016), retracing a century of sound poetry, from 1915 to now. You can thus discover the original voices that have marked art history, cultural life, and social movements, from the abolition of the death penalty, to women’s rights... The randomly played pieces reveal the diversity of registers proposed by Giorno, from Antonin Artaud to Louise Bourgeois, Serge Gainsbourg, Simone de Beauvoir, Bernard Heidsieck, Brigitte Fontaine or else Eric Duyckaerts...

Famous for his anthropomorphic sculptures, black masks and hyper-realistic clowns, for this exhibition, Rondinone has reinvented the retrospective format as portraiture and recaptures a form of spirituality through the connections between art and poetry.

‘The title "UGO RONDINONE : I ♥ JOHN GIORNO" is a collective «I» in which Ugo Rondinone invites each of us to share and to feel the spiritual and political commitment of an iconic figure of American counterculture. This exhibition is not just the first Giorno retrospective; it is a declaration of love that heralds the invention of a new genre.’ Florence Ostende

(2) Taken from Florence Ostende’s conversation with the artist in December 2014.


John Giorno will also be presenting two performances in conjunction with the exhibition as part of the Paris Autumn Festival:

- John Giorno Live, with John Giorno, on 18 November 2015 at Palais de Tokyo. This unique event featuring John Giorno is a unique opportunity to experience his extensive performative repertoire through a selection of poems, some of which have never been performed before. Giorno has created a site specific sound environment of poems recorded in the studio with Bob Moog, the legendary inventor of the synthesiser. Films featuring Giorno will be projected on a continuous loop as an accompaniment to the live poems, including Ron Mann's Poetry In Motion (1982), Michel Negroponte's No Accident (1995) and Peter Ungerleider's Loving Kindness (1995).

- Street Works by John Giorno will also run throughout the exhibition period and will see people on roller skates handing out Giorno's poems to visitors and those passing by the Palais de Tokyo, reenacting his participation in the 'Street Works' performances initiated by a group of artists and poets in the streets of New York in 1969.

These performances are jointly organised by Palais de Tokyo and the Paris Autumn Festival.

John Giorno will also be presenting a performance on Andy Warhol, followed by a conversation with Florence Ostende, on 23 November at the Centre Pompidou-Metz as part of the Warhol Underground exhibition, as well as performing at the Maison Rouge on 25 November.

The dialogue continues at the Musée d’Art Moderne de la Ville de Paris, which is hosting an exhibition dedicated to Andy Warhol from 2 October 2015, and the Almine Rech gallery, which is presenting a solo exhibition of Giorno's work from 21 November 2015.

An issue of Palais de Tokyo magazine will be dedicated to the exhibition.
www.palaisdetokyo.com