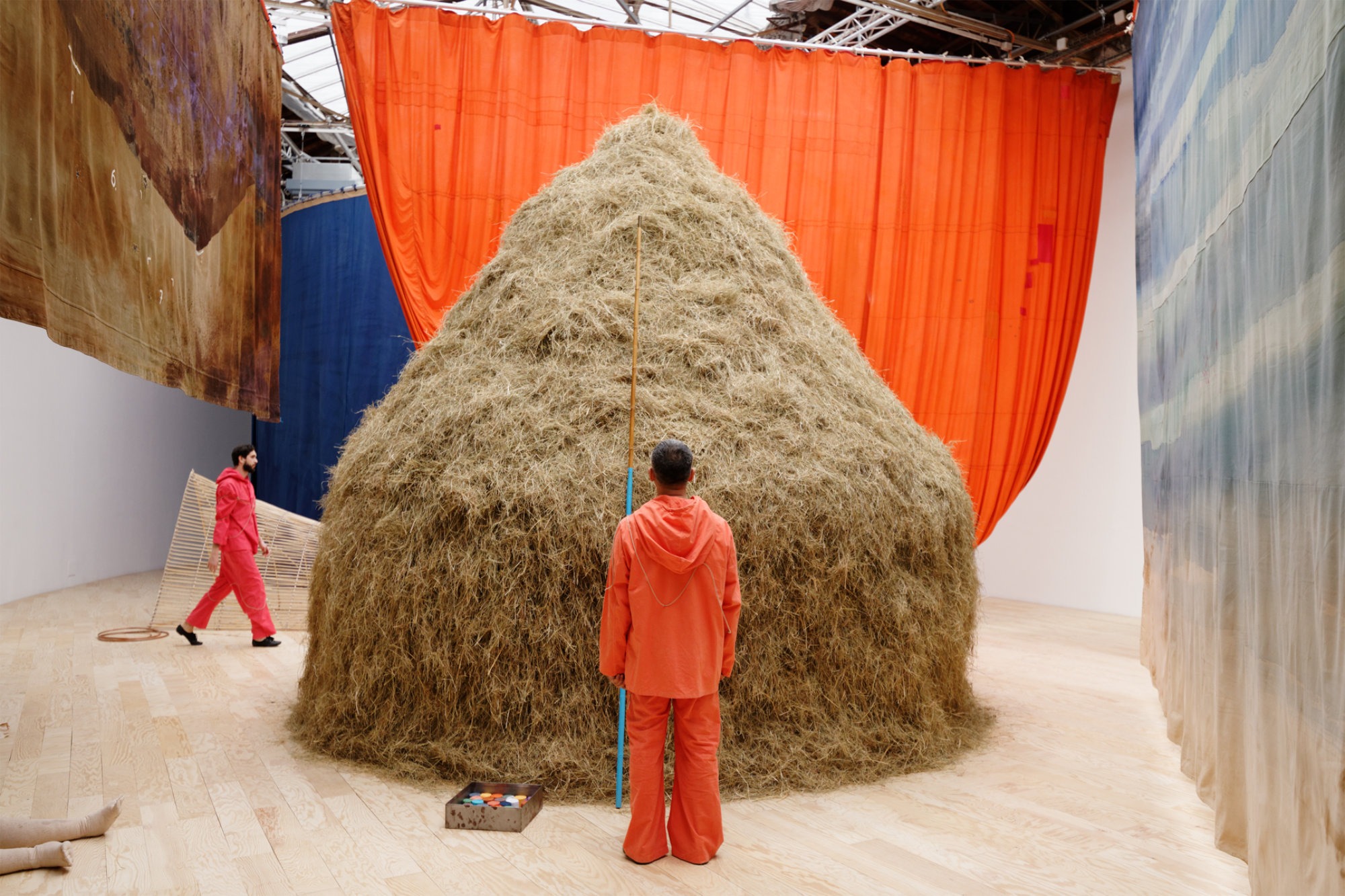 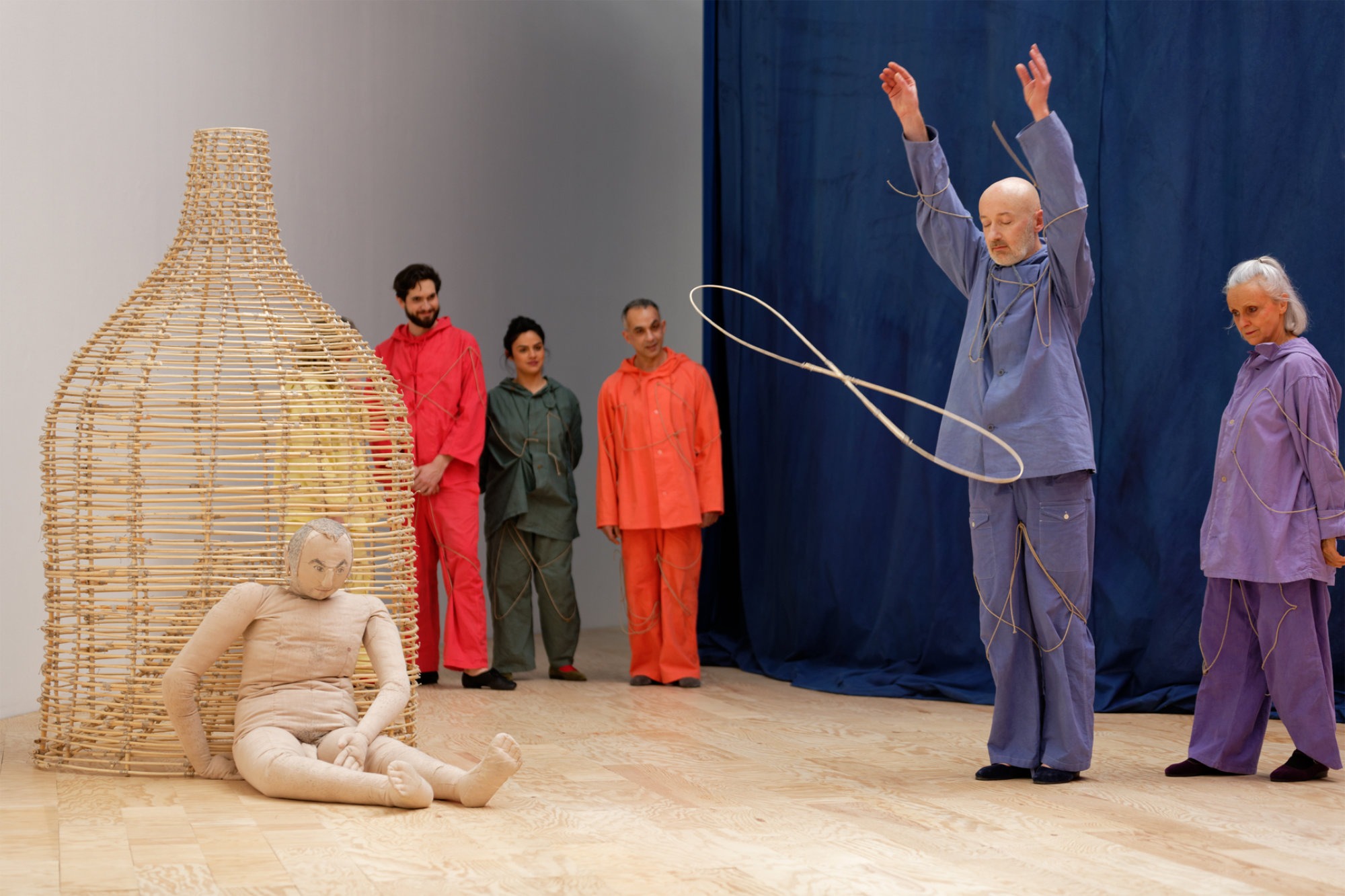 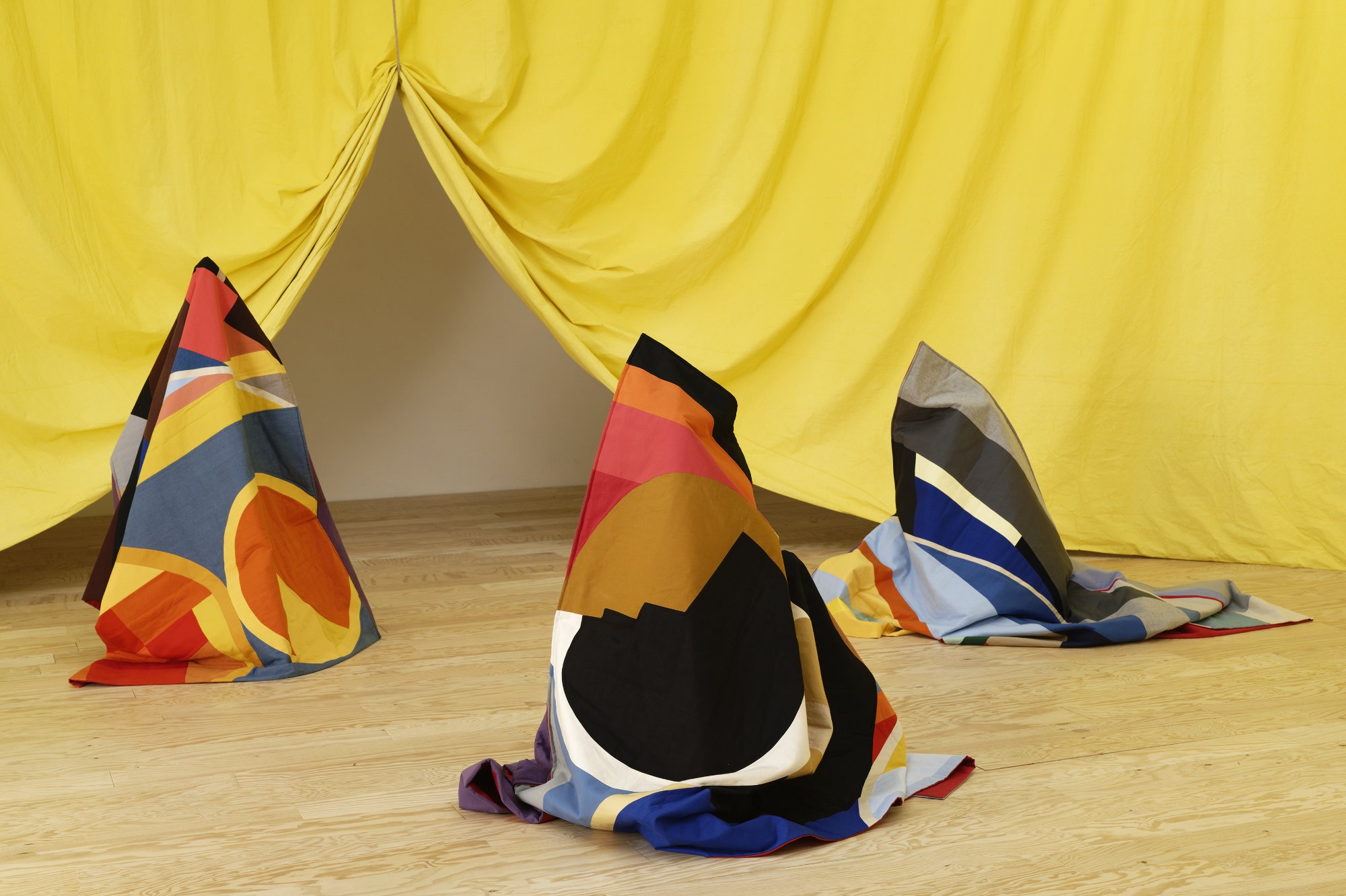 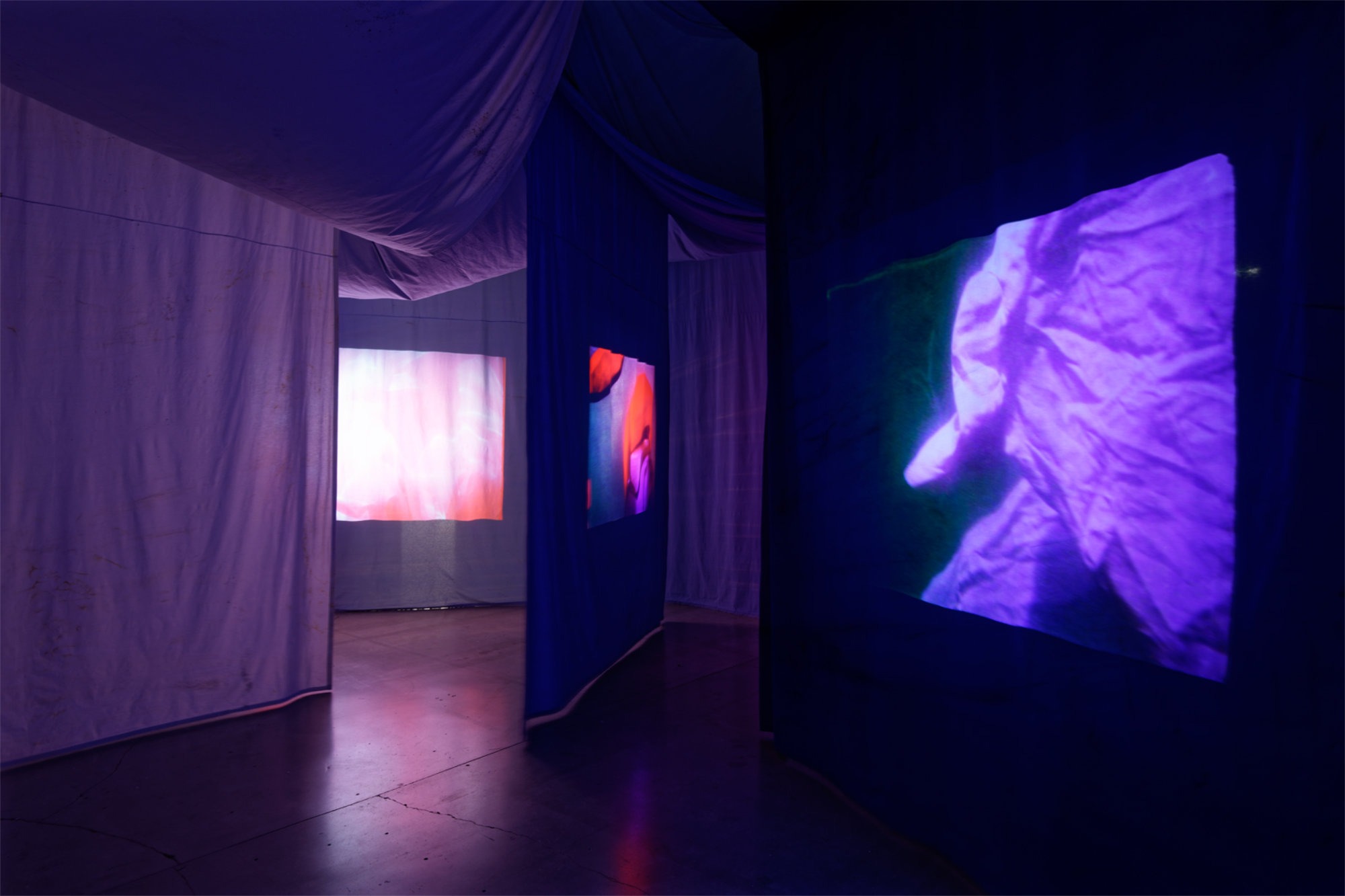 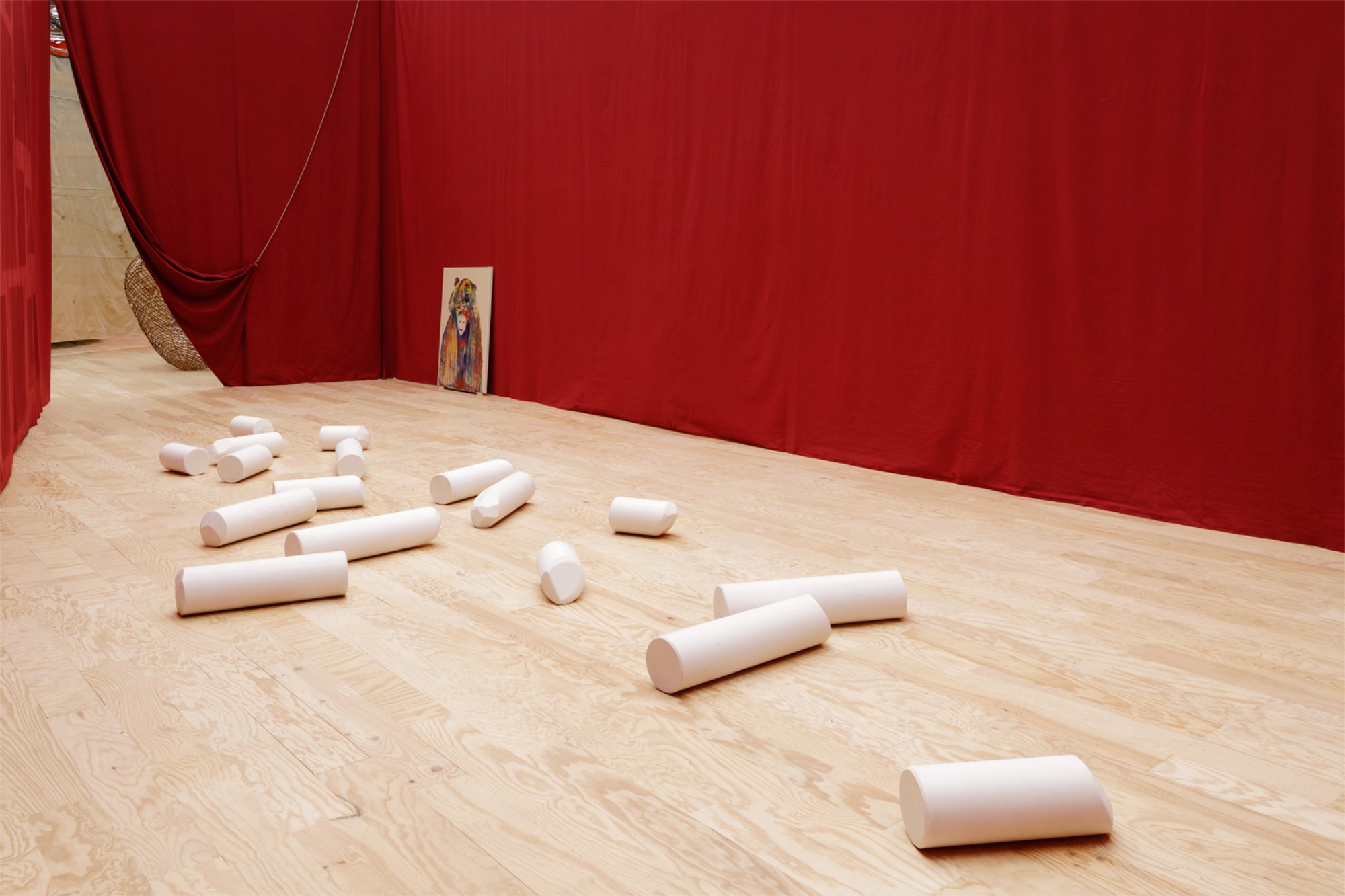 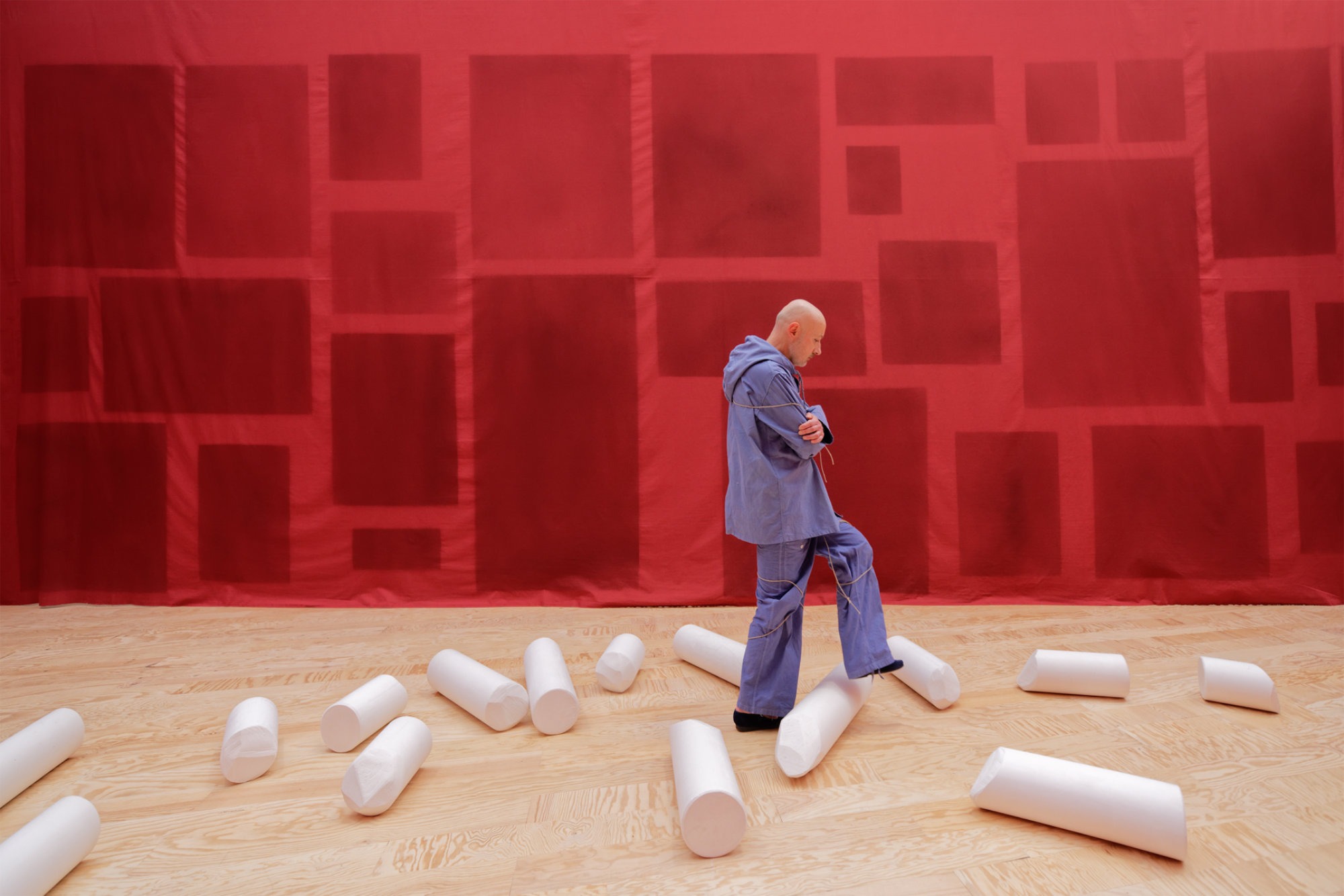 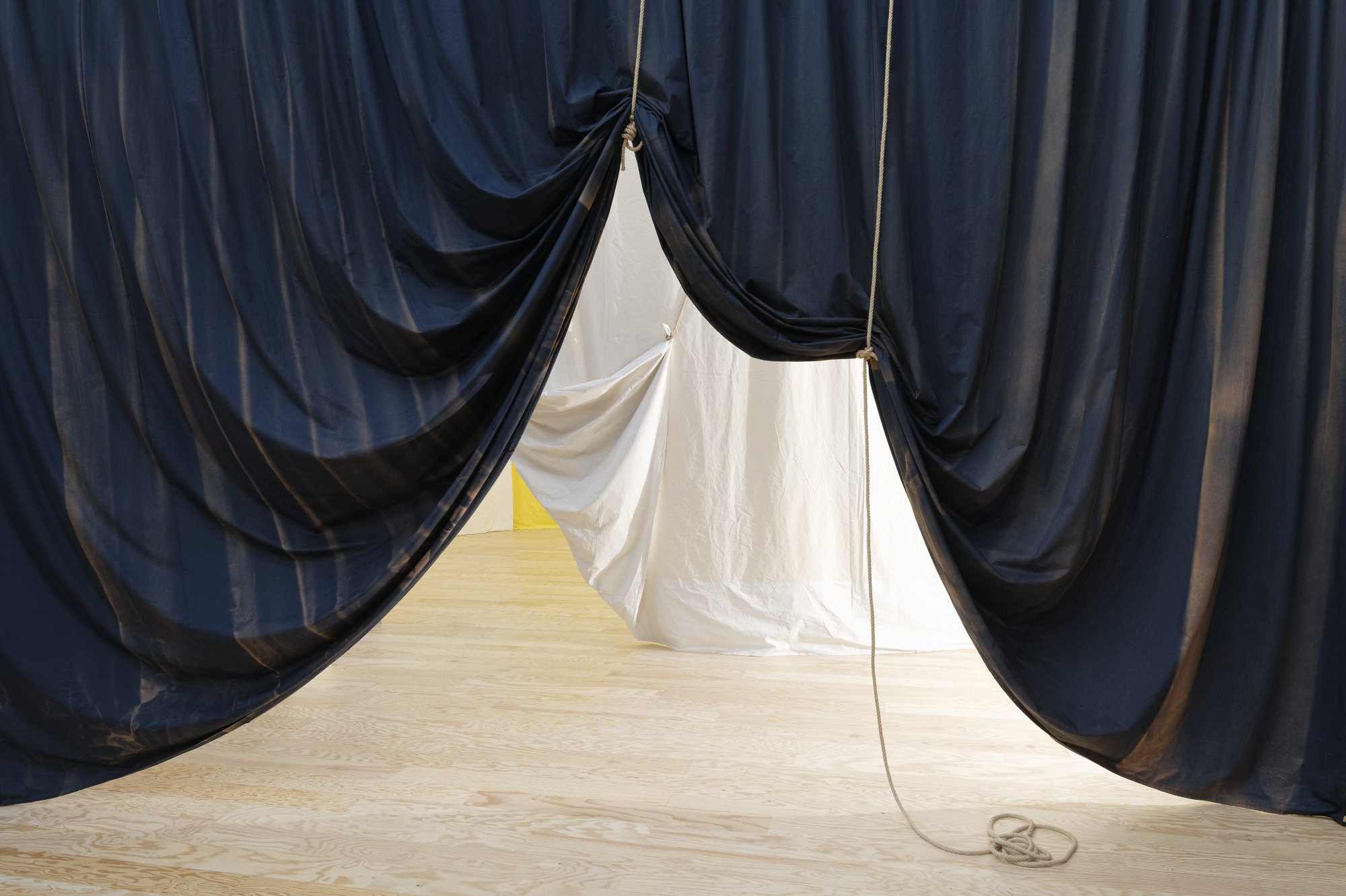 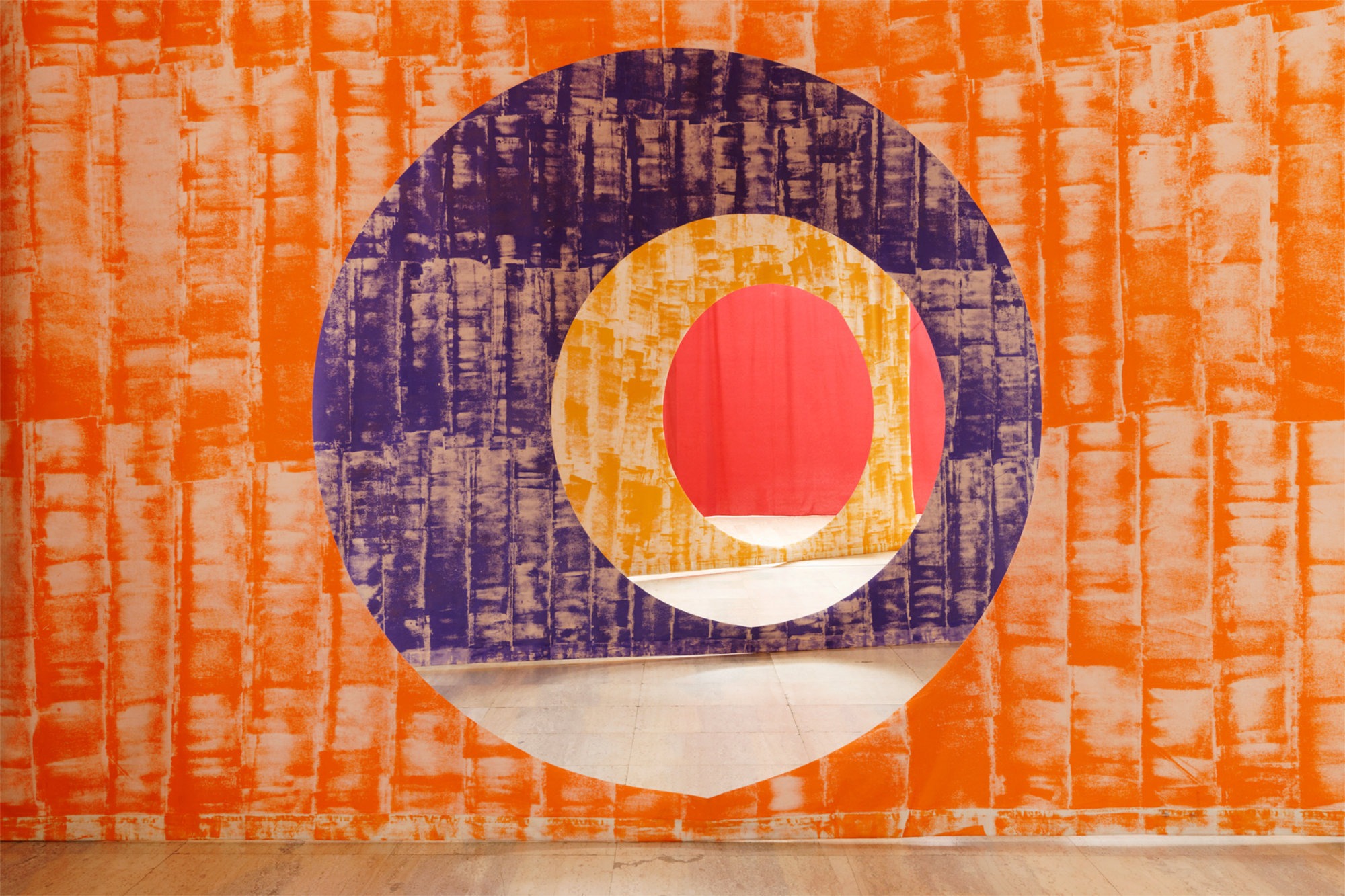 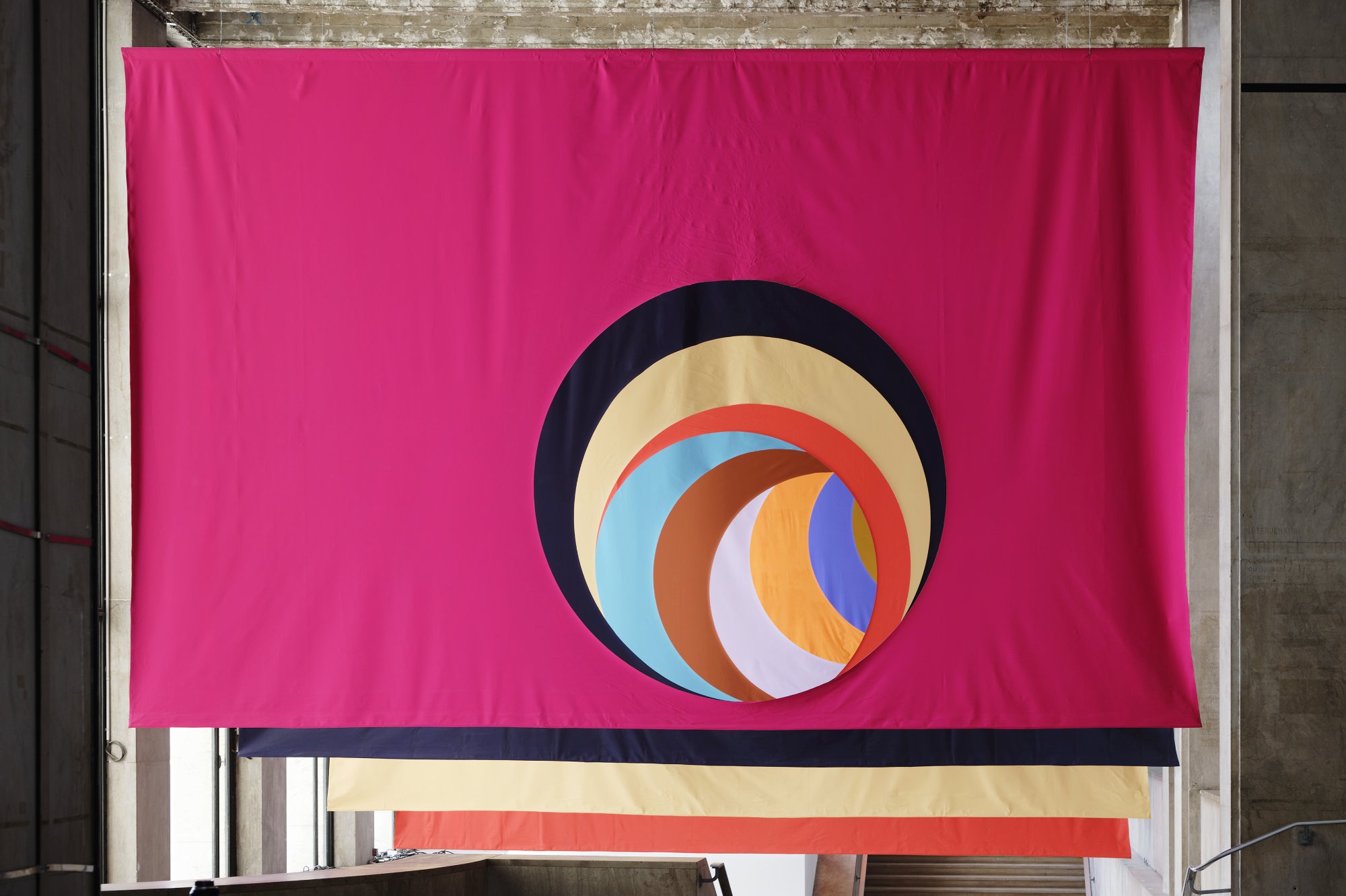 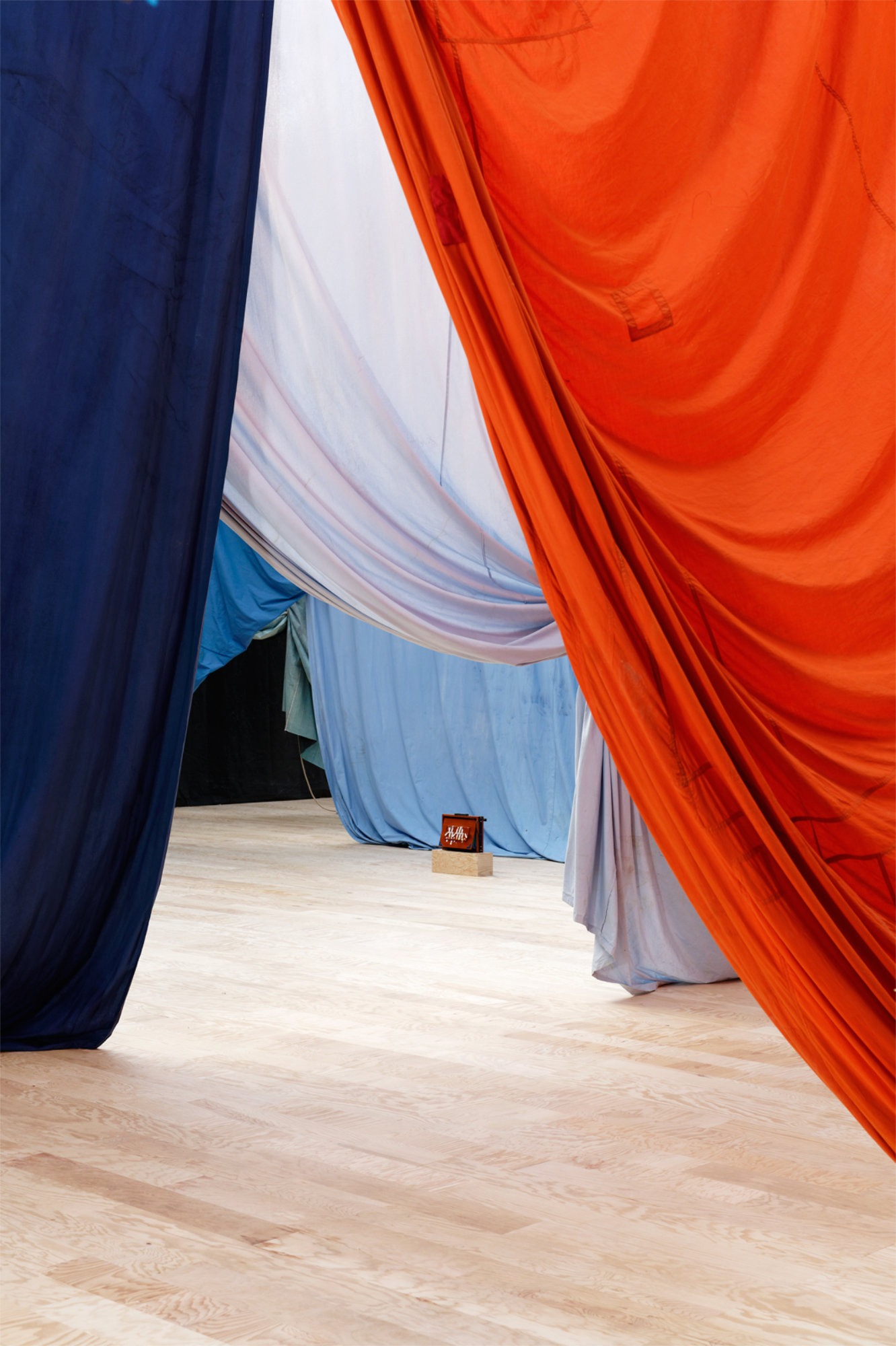 “Fabrics allow me to camouflage, conceal and clad the white cube of a museum, and thus change the system of values and the frameworks of thought. I use fabrics to create spaces in which we can apparently be elsewhere, in other words, fall into other worlds. (...) In a space where curtains have been hung, the separation between the interior and the exterior, or between different worlds, becomes blurred. And that blur makes us wonder where we are.”(1)

For this new exhibition at the Palais de Tokyo, Ulla von Brandenburg (born in 1974 in Karlsruhe, lives and works in Paris) has imagined a total, evolving project, inspired from the theatre, as well as its imaginary and conventions. Around the notion of ritual, understood as the possibility to explore the relationships between individuals and groups, and to create or not to create something in common, the artist invites the public to take part in an immersive and renewed experience of the themes, forms and motifs that feed into her work: movement, the stage, colours, music, textiles...

Installations, sculptures, performances and films specially conceived for the exhibition answer to one another and tangle together to form an open narration, between authenticity and artifice, the natural world and human activities, the interior and the exterior, fiction and reality.

As often in her work, the public is invited to penetrate inside the pieces on display, and cross over the thresholds materialised by broad sheets of fabric. Thus, right in the entry hall, a vast installation of painted curtains, pierced in the centre by a large circle, appears – like optical devices inspired by the opening of a photographic lens. This preparatory. passage, or crossing through the fourth wall, which is at once open and fantastical, leads into the exhibition while providing an initial immersion into colour, a reflexion about the nature and fragility of the materials; but also the capacity to evoke a universe immediately, be it fictional or real.

This twofold relationship with images, this construction of a representational framework and this involvement of bodies, is pursued though a very large textile installation, which also reveals the artist’s interest in this transportable and modulable material, which circulates, is exchanged and metamorphosed over the ages and by the communities that produce it. It is deployed across five environments, produced using coloured fabrics coming from the artist’s previous pieces. Each of these shelters, with their uncertain geometries, has a function or temporality: action, figure, ritual, night, habitat. During the entire duration of the exhibition, every Saturday five dancers will construct and deconstruct these spaces by using a certain number of ritual actions to handle the works/props on show: outsized sticks of chalk, ropes, fishing-rods, quilts, twin dolls of the performers, bowls, a haystack, fish traps, torn fabrics gradually invading the floor, etc. The exhibition thus affirms its capacity for transformation, creating constantly renewed narratives and singular combinations.

Thanks to a play of recurring gestures, costumes and props, these weekly performances announce the film situated at the heart of the exhibition, shot in colour with the same group of actors / dancers at the Théâtre du Peuple in Bussang in the Vosges. Constructed on the side of a mountain in the late 19th century, this is a popular, humanist theatre, whose motto is written on its proscenium arch: “By art for Humanity”. Among other particularities, its backstage opens out onto the forest, so as, in its creator’s words “to cleanse art by nature”. By investing this site which is historically and symbolically charged with “both a humanistic and artistic ideal [which] consisted in creating in the mountains of the Vosges a theatrical festival destined to all people, in all their social spheres”,(2) Ulla von Brandenburg has imagined a tale, like a rite of passage, or phantasmagorical ethnology. For, the artist has filmed a “micro-society, as though it were the last of its kind, bearing witness to its workings, its values but also its capacity to change and to open out towards the exterior”. In this way, she brings up to a reflection
on the popular, the common, the community, while attempting to abolish the distinctions between the public and the private, professionalism and amateurism, sedentariness and nomadism, nature and culture. In this, there can be seen numerous variations on loss, giving, transmission, abandon, flight or ever a choreography without any other object than itself.

Opening on a more fantastical dimension, the last part of the exhibition is made up of a labyrinthine installation whose sheets of faded blue fabric, which have also been recycled, show the projections of five films shot under water, in which objects (a mirror, a shoe, a dress...) appear and disappear as though after a shipwreck. As a counterpoint to the terrestrial, rural world at the beginning of the exhibition, these subaquatic visions evoke at once a hereafter, a vanishing of the human being, and a descent into the subconscious.

A monograph published by the Palais de Tokyo accompanies this exhibition. This French / English bilingual book includes a rich iconography, in particular with views of the exhibition at the Palais de Tokyo, a conversation between the artist, Laure Fernandez, a researcher into the performing arts, and Yoann Gourmel, the curator of the exhibition, as well as two unpublished essays by the art historian Merel van Tilburg and the historians Léonor Delaunay and Manuel Charpy.
www.palaisdetokyo.com