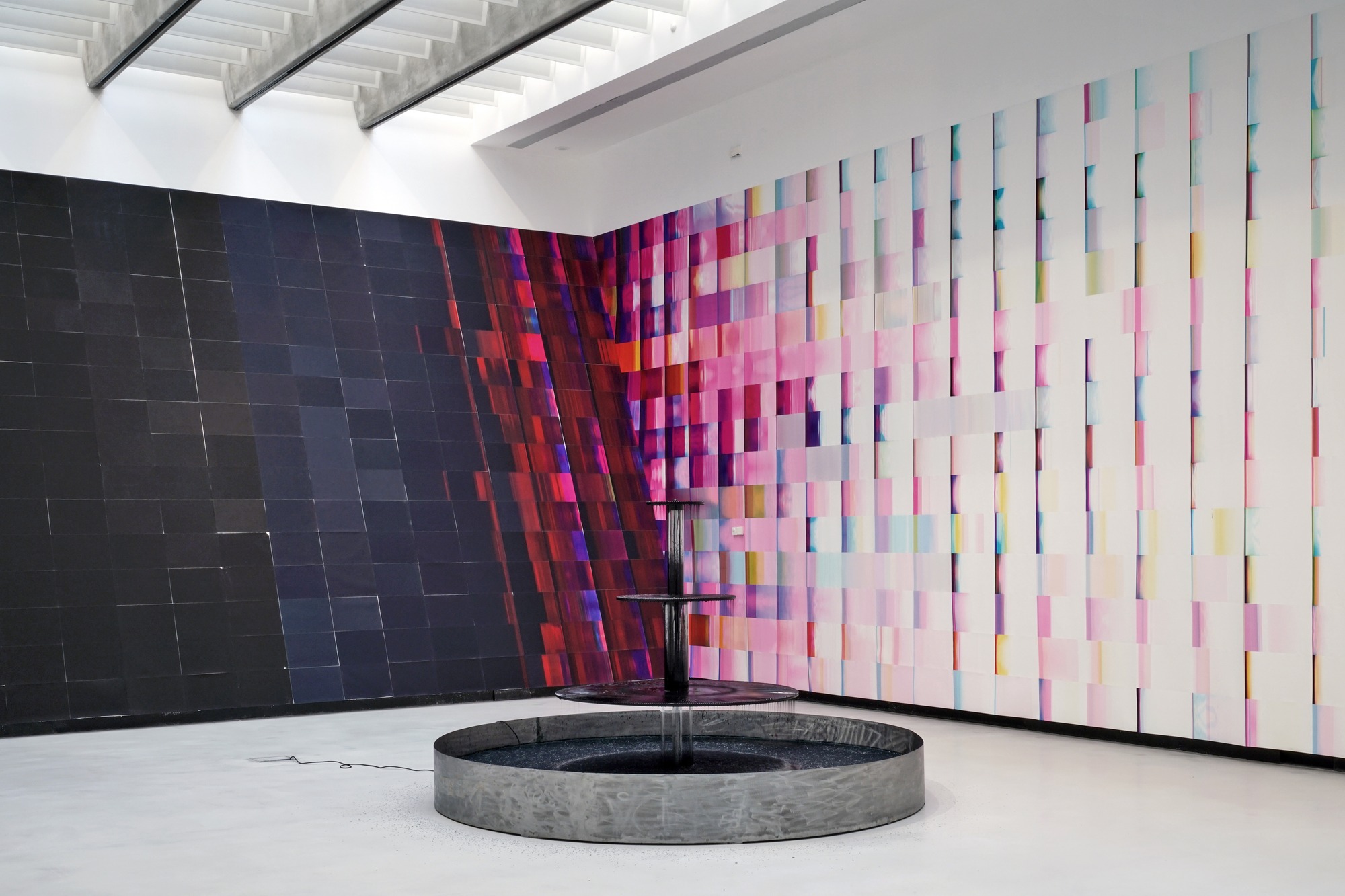 Photo: Luis Do Rosario
© Caline Aoun
We use Google Maps, visit dating platforms, and store our images in a cloud as a matter of course. The transition from the analog to the digital age has radically changed our personal, economic, and political relationships. The global data flow shapes not only our immediate physical environment, but entire social systems. Nevertheless, the circulation and processing of this data remains immaterial and abstract to us, and cannot be linked to our own reality of life.
As Deutsche Bank’s “Artist of the Year,” Caline Aoun shows in reduced experimental arrangements how data manifest themselves materially, how inseparably real and virtual worlds are actually linked. For Aoun, the permanent flood of images and data resembles “noise” that dominates our entire lives. Instead of amplifying this media noise further, the artist concentrates it and gives it a material dimension. She describes this as a way of creating “new experiences, forms of silence, and empty spaces,” of creating an aesthetic environment that makes it possible to sensually grasp and rethink otherwise intangible connections.
Born in Beirut in 1983, Aoun belongs to a generation of young Lebanese artists who, after the outbreak of the civil war in the country in 1975, completed their training abroad and today play a decisive role in shaping the Middle East art scene. Although Aoun is concerned with the phenomena of digitalization and the Internet, she does not use high-performance computers, smartphones, or VR glasses. She often works with simple inkjet printers, which she deploys until the system collapses and “involuntarily” produces increasingly reduced images.
This is how the wall piece Contemplating Dispersions was created from color-printed DIN A3+ sheets. An almost tar-black surface splinters increasingly into reddish-purple shimmering color fields. The ornament then decomposes into narrowing beams of light blue, turquoise, and yellow. But as the printer tries to fulfill the job of producing black pages, the cartridge gradually empties. After all, the exhausted device uses all available ink residue, and all that remains is white, riddled with streaks and traces of the empty printer heads. Aoun’s works do not depict, but are themselves the “tangible” result of a supposedly “invisible” process, which the artist presents to us directly. So the exhibition title seeing is believing is meant quite literally.
This is also shown by the four reduced fountains of Infinite Energy, Finite Time, the central installation of the exhibition. Bubbling out of each fountain is a color used in the CMYK color model: cyan, magenta, yellow, or black. The fountains are connected to each other by a system of transparent hoses and exchange with one another at a barely perceptible rate. At the beginning of the exhibition, pure colors still effervesce from the ink heads, but in the course of time they melt into a cloudy dark sludge, which coagulates, clogs the ink heads, and finally dries completely, thus interrupting the cycle. It is about extreme scarcity and excessive abundance, about circulation and congestion.
"My works may be quite abstract,” says Aoun, “but at the same time they resemble something very real.” Her exhibition tells of the collapse, the overtaxing of systems. It has a clear message: that the noise must stop, that we need space for contemplation to find new systems and ourselves.