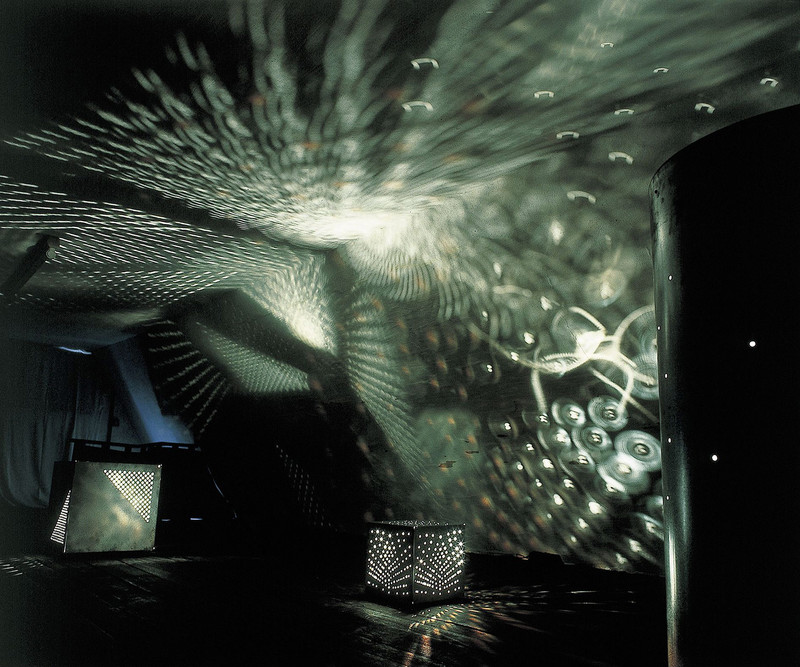 At Neue Nationalgalerie, the slide installation The Proliferation of the Sun will be presented each evening from10 pm to 3 am. Originally conceived for a small off space in New York in 1967 and performed that same year in Nuremberg, Cologne, and Dortmund, colorfully shimmering shapes on over 1000 hand-painted glass slides are projected into the open exhibition space, resulting in what Piene calls a “poetic journey through space.” The reconstruction of this spectral color experience will develop a special evocative power in the upper hall of the Neue Nationalgalerie, confronting the strict architecture of the Mies van der Rohe building — which will close for renovations at the end of 2014 —with Otto Piene’s idealism and utopian visions.

The exhibition at Deutsche Bank KunstHalle will explore the enormous breath and experimental attitude of Otto Piene’s early work. Early stencil paintings, light prints and light sculptures, impressive smoke drawings and fire paintings — some from the Deutsche Bank’s own collection — will show the artist’s experimental approach with the elements air, fire, and light, and the liberation of the arts that he engaged in.The exhibition will close with a large light space designed especially for the exhibition.
To mark the start of the exhibition, a spectacular sky art event — supported by Deutsche Bank AG — will be held outside the Neue Nationalgalerie on the evening of July 19, 2014. With inflatable sculptures from three to 90 meters in height in a star shape, including the Berlin Superstar, which he showed for the first time in 1984 at Berlin’s Technische Universität, Otto Piene will impressively play the Berlin night sky.
Born in Laasphe, Germany in 1928, Otto Piene is a key artist of the twentieth century avant-garde and one of the founders of the international ZERO movement in the 1960s. He played a definitive role in art’s programmatic new beginning by including elementary natural forces. His smoke and fire images, his light spaces and ballets stand for a virtually romantic longing for unity with nature.
Otto Piene’s interdisciplinary large projects in public space were pioneering, beginning in the late 1960s in the context of MIT’s Center for Advanced Visual Studies, where he served as director beginning in 1974, or his monumental rain- bow for the closing ceremony of the 20th Olympic Games in Munich 1972. Piene’s intense collaboration with natural scientists and technicians opened new perspectives for art that can be found echoed in contemporary positions like those of Olafur Eliasson, Carsten Höller, or Tomás Saraceno.
A reprint of the central Piene publication More Sky from 1973 will be published by Verlag der Buchhandlung Walter König (Cologne) to mark the exhibition.
www.db-palaispopulaire.com