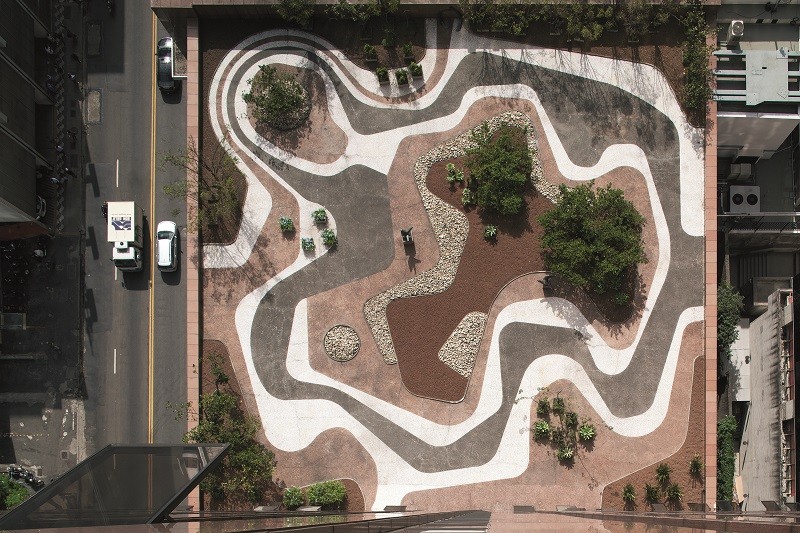 Roberto Burle Marx (1909–1994) was a twentieth-century Renaissance man: a landscape architect, painter, sculptor, set designer, environmental activist. During his over sixty-year career, he designed more than 2,000 gardens around the world and, on expeditions, discovered almost 50 new plant species. At the same time, he created independent objects of extraordinary beauty. In his home country Brazil, Burle Marx, along with the architects Lúcio Costa and Oscar Niemeyer, is revered as a pioneer of Brazilian Modernism. His designs for the capital Brasília and above all for Rio de Janeiro have had a lasting impact on the face of these cities. His revolutionary landscape architecture, oriented to abstract painting, has an international reputation even today. The rest of his oeuvre, however, is virtually unknown.

After its premiere at New York’s The Jewish Museum in 2016, the show “Roberto Burle Marx: Brazilian Modernist” is now on view at the Deutsche Bank KunstHalle. The exhibition illustrates the full range of his artistic production, seen in Germany for the first time, and erases boundaries between the different media and disciplines. This is documented above all by Burle Marx’ watercolors and drawings for landscape and urban designs that open the exhibition—for example, for the roof garden designed in 1938 for the Ministry of Education and Health building erected by Niemeyer, Costa, and Le Corbusier; the Parque do Flamengo in Rio de Janeiro (1961); and the world-famous wave-like paving of Avenida Atlântica (1970) in Copacabana. Many of these designs are akin to abstract art, and resonate with contemporary artworks featured in the exhibition such as a 2003 painting by the Brazilian artist Beatriz Milhazes. To illustrate the artistic influence of Burle Marx, his works enter into dialogue with works by international contemporary artists. Among them are Juan Araujo, Paloma Bosquê, Dominique Gonzalez-Foerster, Veronika Kellndorfer, Luisa Lambri, Arto Lindsay, and Nick Mauss.
When the young Burle Marx traveled to Berlin from Rio de Janeiro with his family in 1928, the German capital was a laboratory of Modernism. At this point in time, he had long been familiar with German culture. His father, Wilhelm Marx, a German Jew, immigrated to Brazil from Trier, Germany, at the end of the nineteenth century. A love for German opera and art was deeply rooted in the prosperous, educated family. Another focus of the exhibition, therefore, is the art and culture metropolis Berlin, which impressed, influenced, and continually occupied Burle Marx. For example, shortly before his death he created a design for Rosa-Luxemburg-Platz that was not realized.

In the Berlin of the Weimar Republic, Burle Marx resolved to be both an artist and a landscape architect. His visits to the modern art collection at the Kronprinzenpalais, where he viewed works by German Expressionists and Van Gogh, contributed to his decision. But he made another discovery: In the greenhouses of the Botanical Gardens in Dahlem, he recognized the beauty of Brazilian flora: the philodendrons, bromeliads, and water lilies that were ignored in Brazilian gardens but lovingly cultivated here. “I hate the idea that a landscape architect should only know about plants,” he said decades later. “He also has to know what a Piero della Francesca is, what constitutes a Miró, a Michelangelo, a Picasso, a Braque, a Léger.”

As is apparent from Burle Marx's plant studies and early drawings, paintings and garden designs, his path both in the visual arts and in landscape architecture led to abstraction. In his garden designs, he transferred two-dimensional pictures to three dimensions. While conventional Brazilian landscape architecture was still oriented to European Belle Époque garden design, and flowers and plants were imported from overseas, Burle Marx worked exclusively with domestic flora. He was not interested in the blossoms, but primarily in the shapes and colors of the leaves. Rather than planting flowerbeds picturesquely, he opted very clearly for color, mass, and surface, for strong contrasts, meandering forms and checkered, geometric fields.

In the course of the exhibition, the architectural and artistic aspects of his career, which are inextricably entwined, are documented repeatedly. The flat abstract forms in his designs for private gardens and public squares are reflected in the design principles of Burle Marx's painting and applied art. In addition to abstract paintings, ceramics, jewelry, stage sets, and costume designs are presented. They show how he wedded his love for Brazilian traditions with European Modernism. This is apparent in the abstract versions of “azulejo” tiles that he used on walls and building walls.

Burle Marx was not only an innovator, but also a conservator and collector. On his 365,000 m2 estate, a former coffee plantation near Rio de Janeiro, he cultivated one of the world’s largest collections of tropical plants, encompassing over 3,500 species. In the seventeenth-century building ensemble, he collected glass painting, as well as folk, sacral, and pre-Columbian art.

“Roberto Burle Marx: Brazilian Modernist” illustrates the profound humanism and the spirituality in which Burle Marx’ bold abstractions are rooted—the idea of a modern Garden of Eden that inspired him throughout his life.

The exhibition was organized by The Jewish Museum, New York, and was made possible, in part, by Deutsche Bank, The Emanuel and Riane Gruss Charitable Foundation, and other generous supporters.