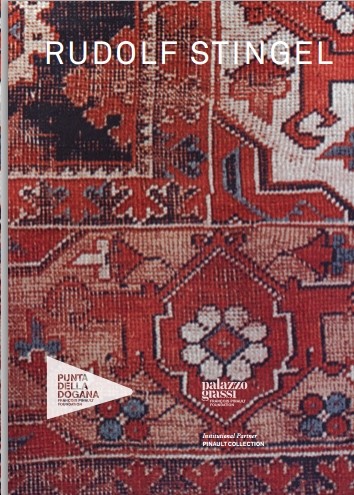 The exhibition Rudolf Stingel unfolds over the atrium and both upper floors of Palazzo Grassi, a space of over 5,000 square meters. For the first time, Palazzo Grassi is devoting the entirety of its space to the work of a single artist. It includes a site-specific installation as well as recent creations and previously unseen paintings. This is Stingel’s largest ever monographic presentation in Europe. The groundbreaking project, conceived by the artist expressly for Palazzo Grassi, spreads over all the rooms of the building, where carpeting based on an oriental rug covers the entire surface of the walls and floors. The installation is part of Stingel’s artistic research, which has always analysed the relationship between exhibition space and artistic intervention: for the artist, the carpet is a medium through which painting relates to its architectural context.
Interested in the redefinition of the meaning of painting and of its perception, Stingel places the carpet at the core of his poetics. It bears witness to the passage of time and people and is also a source of inspiration, with its variety of typologies and textures, for successive series of paintings.
The exhibition presents a selection of over thirty paintings from collections around the world, including the artist’s collection and that of François Pinault. Many of these works were created in the studios of Merano and New York specifically for this project.
The first floor hosts a group of abstract paintings that ofer an interpretation of the historical, architectural and artistic context of Venice. The reference to Middle-European culture, significant in Stingel’s own upbringing, is also a tribute to his friend Franz West, whose magnificent portrait features in this show. The pattern of the carpet, while bringing to mind the city’s past, also evokes a unique environment: Sigmund Freud’s study in Vienna, which was characterized by diferent oriental carpets laid on floors, walls, sofa and table. The artist’s reference to the office of the father of psychoanalysis offers a key to interpret the installation: the feeling of containment and the sensory experience that we discover when entering this labyrinth guide us into the Ego, with its repressions and illusions, where each painting contributes to forming a topography of the unconscious. The architectural space becomes a meditation place, a silent and enveloping site of introjection and projection. The use of the wall-to-wall carpet turns the exhibition’s path into one single environment while suggesting a new, rarefied and suspended atmosphere in which the silver, black and white of the paintings stand out, opening onto a new dimension. In this sense, the exhibition turns into an inner journey the visitor is invited to experience freely: from the artist’s self-portrait partly hidden between the columns in the atrium to the silver glow of the abstract paintings on the first floor; from the rooms where the carpet becomes a painting to the black and white portraits of sculptures on the second floor. Centered on the relationship between abstraction and figuration, the exhibition displays the constant fluidity between these two polarities, and how they characterize the artist’s poetics. It also invites visitors to ponder the idea of portrait itself and the concept of appropriation of images. The upper floor hosts a selection of paintings that represent ancient wooden sculptures taken from black and white photographs and
illustrations, and painted photo-realistically.
Born in 1956, Rudolf Stingel lives and works between New York and Merano, his hometown. His work has been at the centre of several exhibitions in numerous international institutions, including the Secession, Vienna (2012); the Neue National Galerie, Berlin (2010); the Museum of Contemporary Art, Chicago and the Whitney Museum of American Art, New York (2007); the Museum für Moderne Kunst, Frankfurt (2004); the Museo d’Arte Moderna e Contemporanea, Trento (2001). He took part in the Venice Biennial in 1993 and 2003.
At Palazzo Grassi, his work has been presented in the exhibitions Where Are We Going? (2006), Sequence 1 (2007), Mapping the Studio (2009-2010) and The World Belongs to You (2011).
www.palazzograssi.it