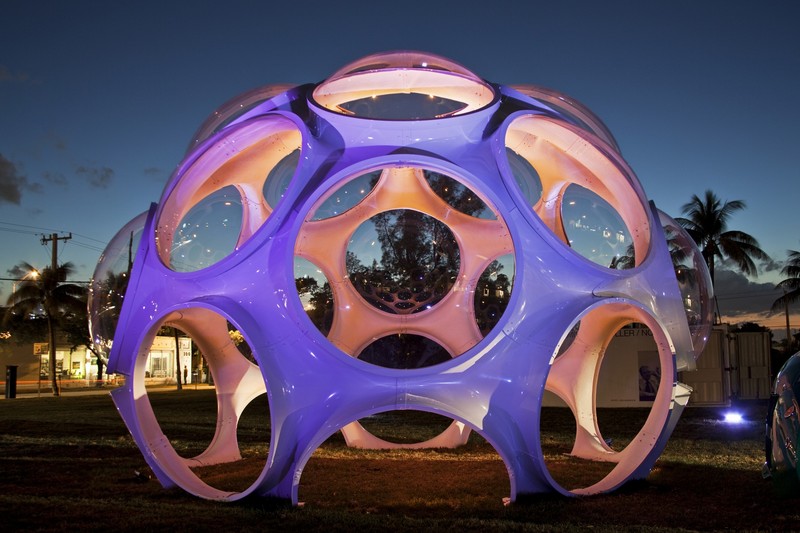 PAMM will install two major interactive pieces from past Design Miami/ fairs, on the occasion of Design Miami’s 10th Anniversary. These design objects will reside on PAMM’s waterfront terrace for the duration of Design Miami/, which runs from December 3rd until the 7th 2014.

The first of these installations is Konstantin Grcic's Netscape, which was commissioned for the design fair as part of his Designer of the Year award in 2010. The second, Buckminster Fuller’s 24-foot Fly’s Eye Dome, was featured at Design Miami/ 2011 as a satellite exhibition in collaboration with the Miami Design District.

Fly's Eye Dome, which was a prototype of Buckminster Fuller’s original design for a fully functional, air-deployable, off-the-grid temporary dwelling, was originally presented as a Design Miami/ satellite exhibition in the Miami Design District called Architecting the Future: Buckminster Fuller & Norman Foster. A long-time Fuller collector and enthusiast, Foster recreated Fuller’s futuristic Dymaxion Car and generously loaned Dymaxion 4 to be exhibited alongside the dome, which had been acquired and restored by Craig Robins. Buckminster Fuller was an artist, architect and evolutionary strategist.

About DESIGN MIAMI/
​Design Miami/ is the global forum for design. Each fair brings together the most influential collectors, gallerists, designers, curators and critics from around the world in celebration of design culture and commerce. Occurring alongside the Art Basel fairs in Miami, USA each December and Basel, Switzerland each June, Design Miami/ has become the premier venue for collecting, exhibiting, discussing and creating collectible design. For more information, please visit www.designmiami.com
www.pamm.org