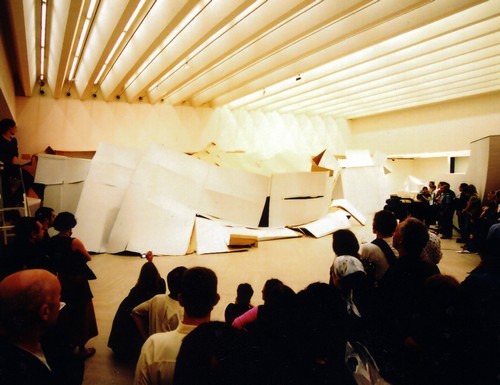 Carlos Bunga: Metamorphosis is the Portuguese artist’s first U.S. solo exhibition. The exhibition features two site-specific, large-scale structures created from perishable materials such as cardboard and packing tape emphasizing ideas of impermanence, crisis and decay. Bunga’s constructions – which grow organically and sometimes recall provisional street shelters – arise from a dialogue with the existing architecture of the sites at which they are built. The structures employ the motif of the metabolic processes that sustain living organisms as a metaphor for the continuous mutation of architecture and urban space.

In the last stage of the work, after carefully building his structures for weeks, Bunga submits them to a radical transformation. Through a performative, cathartic act, he slices the walls of this construction and pulls it with his body to reveal additional layers and traces hidden within its interior.Carlos Bunga will carry out an intervention within his installation at Miami Art Museum. Please call 305.375.3000 or E-mail Education@miamiartmuseum.org.