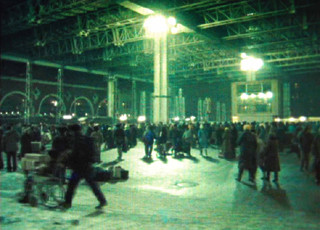 MAC@MAM presents the first major traveling exhibition in the United States of works by one of the great filmmakers or our time. The five projects of Moving through Time and Space span more than two decades of Akerman's career, opening a window onto the permeable border between the creative domains of fact and fiction.
The exhibition features multi-media video installations from her "documentary series:" D'Est (From the East), From the Other Side, Là-Bas, Sud and Women of Antwerp in November, 2007, a new work created especially for the exhibition. D'Est (1993) retraces a journey from the end of summer to the deepest winter, from East Germany, across Poland and the Baltics, to Moscow in a compendium of striking images of Eastern Europe and its citizens in transition.
From the Other Side (1999) is an unsentimental look at the plight of Mexican immigrants as they attempt the dangerous crossing from Agua Prieta, Sonora, Mexico to Douglas, Arizona. Sud (1999) was inspired by Akerman's love for the work of the renowned southern writers William Faulkner and James Baldwin, but quickly shifted from an elegant meditation on the south to a passionate documentary capturing the tumultuous aftermath of the murder of James Byrd Jr. in Jasper, Texas. Là-Bas is a rare self-reflective piece on Akerman's Jewish heritage filmed nearly exclusively in her apartment in Tel Aviv.
Chantal Akerman: Moving Through Time and Space is organized by Blaffer Gallery, the Art Museum of the University of Houston, in collaboration with the MIT List Visual Arts Center, Miami Art Museum (a MAC@MAM presentation), and the Contemporary Art Museum St. Louis. The exhibition and publication have been made possible by generous grants from the Andy Warhol Foundation for the Visual Arts, CIFO (Cisneros Fontanals Art Foundation), Porsche Cars North America, Inc. and MAM's Annual Exhibition Fund. Additional support for the catalogue was provided by the Barbara Lee Family Foundation Fund at the Boston Foundation. The commissioning of Chantal Akerman's new work is made possible by the Ella Fontanals Cisneros Collection.
In Miami, Chantal Akerman: Moving Through Time and Space is a MAC@MAM program coordinated by Adjunct Curator Rina Carvajal.
www.pamm.org