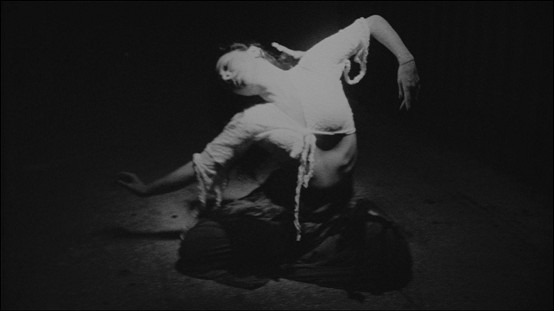 Dara Friedman is an internationally acclaimed, Miami-based artist who is best known for experimental, non-narrative works that deconstruct the techniques of conventional filmmaking. Using the camera lens as an extension of her eye and body, Friedman strives for a heightened sense of subjectivity, distilling individual moments in time down to their emotional essence.

Dancer, which was co-produced by Miami Art Museum, is the third installment in a set of films by Friedman that focus on the effects of spontaneous musical performance in the public sphere. Musical, from 2007-2008, features a broad range of individuals – schoolchildren, office workers, taxi drivers and so on – breaking out into song amid the crowded streets of midtown Manhattan. In Frankfurt Song, from 2010, Friedman arranged for a variety of street musicians throughout the titular German city to interpret the famous tune, “You Can’t Always Get What You Want,” by the Rolling Stones.

Friedman began the process of creating Dancer by sending out a casting call, placing advertisements in outlets such as The Miami New Times, craigslist.com and the MAM website. In February of 2011, she held auditions in the MAM auditorium, selecting over 60 individuals of diverse ages and backgrounds – from classically trained ballerinas to self-taught club dancers. Over the course of the ensuing two months, Friedman filmed her subjects as they performed their moves at various public locations throughout the city, from busy South Beach streets to the empty rooftops of downtown buildings. The performances were shot in grainy Super 16mm black-and-white film with a hand-cranked Bolex camera from a slow-moving van that provided amplified music for all to hear.

As the dancers in the film merge with and interrupt the normal flow of the urban milieu that surrounds them, they provide a poetic metaphor for the liberating potential of self expression, while underscoring the social restrictions that structure our daily lives, especially in public. On another level, the film serves as a portrait of Miami at this point in time – one that pierces through the fog of mass-media representations of this city to provide a vivid sense of street-level, lived experience.

In conceiving Dancer, Friedman drew in part from the work of the late German choreographer Pina Bausch (1940-1990). Bausch is associated with an experimental, interdisciplinary tendency in modern dance known as Tanztheater, which entails loosely defined cycles of expressive movement in lieu of tightly choreographed steps, with the aim of eliciting raw, authentic emotion from the performers. In line with these ideas, Friedman directed each individual in the film to dance in ways that felt most natural to him or her. Through a careful crafting of the filming process – tailoring the composition, camera movement and tempo to the specifics of each sequence, and reacting to the dancers’ bodies – Friedman transforms each participant from someone being passively watched to someone being danced with, a partner. In this way, she brings the spectator into the action, minimizing the divide between reality and the moving image.
www.pamm.org