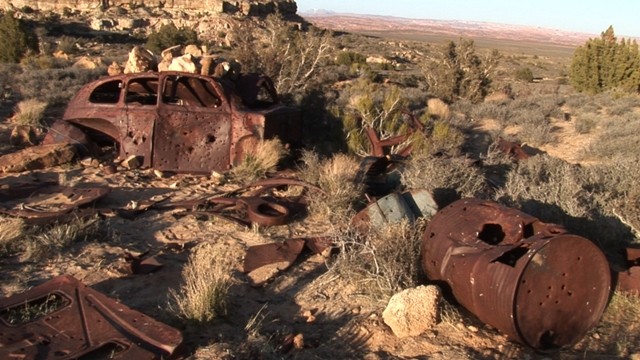 MIAMI – February 04, 2011 – Miami Art Museum presents The Wilderness, a thematic group exhibition exploring the real or imagined boundaries between tamed and untamed nature. On view March 27 through June 26, 2011, the exhibition grapples with competing definitions of “wildness,” pitting traditional conceptions of a chaotic, primordial realm that awaits human subjugation against the idea of a self-regulating order that courses through the natural world.
“The works included in The Wilderness raise fundamental questions about humanity’s relationship with nature," said MAM Associate Curator René Morales, curator of the exhibition. “In different ways, each work dramatically underscores the intertwinement of nature and the human sphere, while evoking some of the psychological, political, ethical and ecological ramifications of our historical tendency to conceive of them as separate entities.”
The Wilderness features a focused selection of film and sculptural installations, each with its own dedicated space, by artists Darren Almond, David Brooks, Tacita Dean, Christy Gast and Allan McCollum – in addition to works by Matthew Buckingham, Aramis Gutierrez and Fernando Ortega.
At the center of the exhibition is a large-scale installation by Allan McCollum titled The Event: Petrified Lightning from Central Florida (with Supplemental Didactics) (1998). To create this ambitious work, the artist joined forces with a team of geologists and electrical engineers from the University of Florida’s International Center for Lightning Research and Testing near the small town of Starke, Florida. McCollum and his collaborators spent several weeks triggering lightning strikes with the use of small rockets, which were attached to copper wires that directed the lightning bolts down to containers filled with sand from the area. The process resulted in the creation of numerous “fulgurites” – small glass objects that bear the same form of the bolts that created them. The artist then worked with a local souvenir manufacturer to create thousands of replicas of a single, selected fulgurite, which are arranged in a jaw-dropping display together with thousands of specially produced booklets dealing with fulgurites, lightning and the project itself.
In collaboration with the Florida Keys Wild Bird Center, CasaLin Pine Rocklands and the de la Cruz Collection’s artist-in-residence program, David Brooks created a new, site-specific commission for the exhibition. Titled Still Life with Stampede and Wild Seabirds, the project poignantly juxtaposes the wildlife of our imaginations (represented here by the type of concrete animal sculptures that adorn many South Florida lawns) with the real wildlife that struggles daily to survive amid and at the edges of the local urban environment.
In Darren Almond’s eerie video installation Arctic Pull (2003), a lone figure is seen laboriously dragging a sledge across the permafrost while battling the intense wind, cold and gloom of a pitchdark Siberian night. The work poetically recalls the harrowing journeys of Arctic explorers in the 19th and early 20th centuries while suggesting, in a broader sense, the historical trope of humanity’s epic struggle to conquer the world’s unknown territories.
Another major work in the exhibition is Christy Gast’s Batty Cave (2010). In this three-channel video installation, the artist uses rocks, scraps of wood and bits of broken glass to relay a folkloric narrative of two men who built an ark in a dusty, remote mountain cave deep in the Utah desert, in preparation for a second biblical flood that they believed would wash away the human world.
The Wilderness also features Tacita Dean’s ethereal 16mm film Banewl (1999), in which the quiet calm of a rural pasture is gradually disturbed by the onset of a solar eclipse. Several moments before the eclipse occurs, the behavior of the animals in the scene becomes erratic, providing subtle testimony to the mysterious levels of perception that animate the natural order – the secret presence of wildness that courses through even the tamest of landscapes, just beyond the thresholds of human comprehension.
www.pamm.org