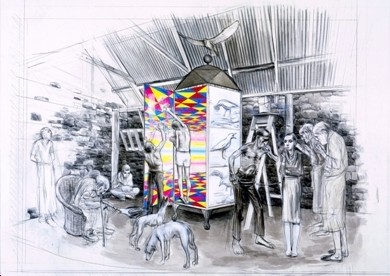 The Islanders: An Introduction is the latest instalment in Scottish artist Charles Avery's epic project which began in 2004. For the first time, the whole project thus far will be brought together including several new works. Avery has created texts, drawings, installations and sculptures which describe the topology and cosmology of an imaginary island, whose every feature embodies a philosophical proposition, problem or solution. Imbued with a formal beauty, humour, and a spirit of philosophical enquiry, these vivid and intricate works invite the viewer to recreate the Island in their own minds, and to use it as an arena for exploring philosophical conundrums and paradoxes.
www.parasol-unit.org