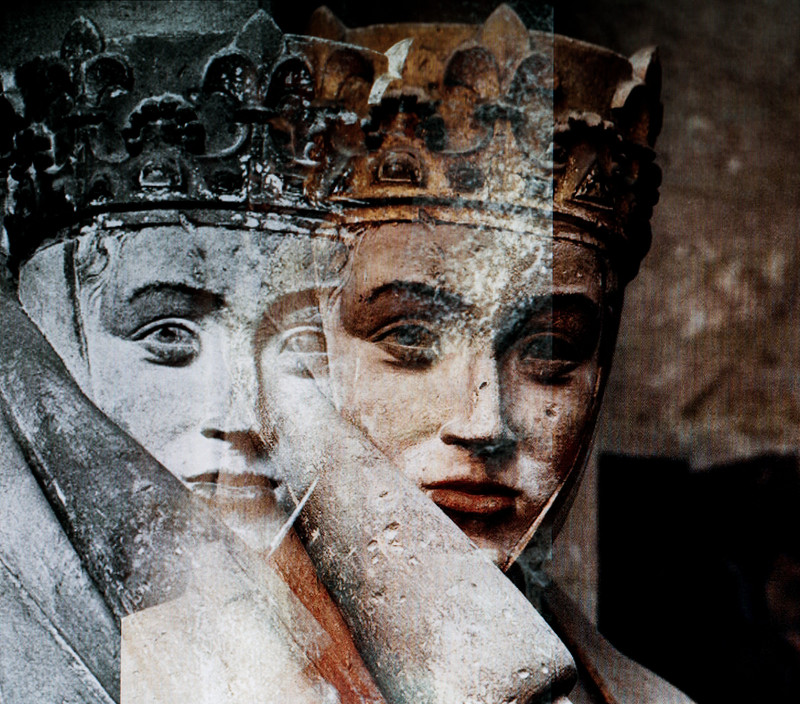 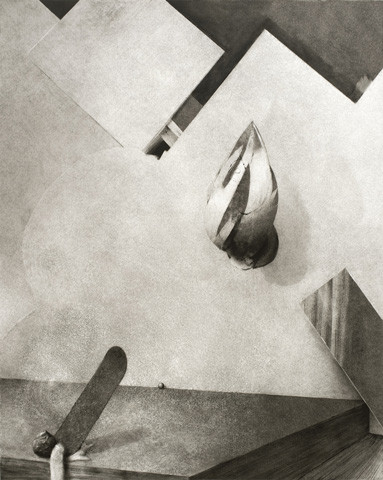 In her artistic work, Claudia Angelmaier deals with the topic of media-reflection. With her analogue photographs, she explores the relation between original and copy or the interaction between picture and text in various cycles or series of her work. Found material such as illustrations or pictures, objects or text passages collected and arranged in selected categories by the artist make up the point of origin. Thus books, postcards and slides can become the protagonists of her large-sized works. In this way Angelmaier’s pictures bear a double representational character: the photographs show both a piece of art and the medium of its representation. The range of Angelmaier’s artistic work stretches from book sculptures («Pflanzen und Tiere» / «Plants and Animals»), abstract colour field photography («Color and Gray») and postcard pictures («Works on Paper») to her current series of double portraits.
In her new series «Portrait» Angelmaier explores the topic of two-dimensionality of the medium by arranging well-known sculptures such as «David» or «Uta» fragmented as double portraits in a picture and thus caricatures the inadequacy of the medium to depict the three-dimensionality of a corpus or a figure in the room in one or several pictures. In Angelmaier’s picture «Uta», the face of the well-known sculpture appears doubled, in a two-folded depiction. In combination with the superposition of the pictures and the grid, the perspective shift provides a mysterious touch to the picture. In the double portrait, Angelmaier’s Uta looks at us directly and seductively – making us forget about her true origin.

Claudia Angelmaier (*1972 Göppingen, Germany) studied artistic photography at the Acadamy of Visual Arts Leipzig as student of the master class of Timm Rautert. She lives and works in Berlin.

In the works by Stefan Guggisberg the rather incomprehensible can be seen. The very thing that cannot be grasped with one or another term, whereas the term of the «incomprehensible» is trying to find a term outside of the picture for exactly that. But the metaphor of the incomprehensible is not imposed on us because Guggisberg’s realm of images slides or shifts into abstraction or because it is non-figurative or non-representational. We can indeed see things that evoke memories, as apparent in the small-sized series «Entfernung zur Sonne» («Distance to the Sun»): a board here, a fire-like yet deep blue whirl there, a door, a glass, textiles lying around – all that appearing in spaces materialized with regard to perspective and with partly clear outlines, i.e. in rooms or some kind of landscape.
The viewers enter into the scenery which can be both stories and possible dreams or nightmares: something happens, something happened, something could happen – that’s what we’re told by our feelings without being able to specify whatever took/is taking place. As exact-vague and unable to locate the spaces are, as unidentifiable are the stories. In this way the pictures are very narrative – only to instantly abscond the narrative again. They seem illustrative, however, the text that could have led us to the pictures here is lost beyond retrieval. Because there is no text. There is only a picture. And the picture remains silent. Text: Konrad Tobler

Stefan Guggisberg (*1980 Thun, Switzerland) studied at the Acadamy of Visual Arts in Leipzig with Christopher Muller and Timm Rautert as well as student of the master class of Neo Rauch. He lives and works in Leipzig.
www.parrotta.de