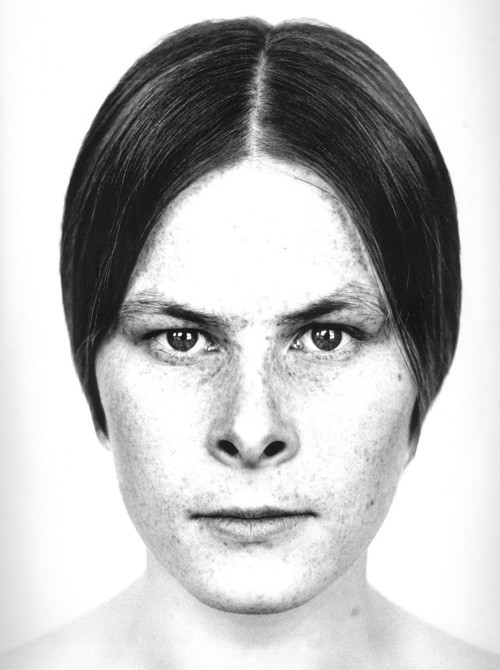 “look at my human heads – into them too I have traced this noon which takes the shape on us of a face the line of the eyebrows / the cheekbones / the mouth and gaze that begin to express something as soon as they step back into the white and everything fleeting is lost on the paper / they then become the individual to which the light unmasks us: pierces us dissolved by it / not mask and also not person – but individual: indivisibly spellbound between beginning and end / silvery the eyes wide open / the face symmetrically filling the pictorial axes of coordinates they stare at them silently: so motionless and open challenging us to see that of which we are made – it reveals itself in that which the light leaves of us / the night that turns into day in a darkroom / shot and grit that as such become light again / regardless of how unpredictably abysmal we are and how passionately proud or powerful we give ourselves: we are but a contact print of nature / shadow only in its life” text: raoul schrott / december 2014

The face both reveals and conceals something. Detlef Orlopp (*1937 in Elbing, West Prussia) started his large-format photographic series of facial studies in the 1960s. Comparable to his works of lakes and mountain slopes, we are looking at an objective cartography of human, and primarily female, facial traits. In these timeless, analogue, black-and-white photos, the artist not only avoids any sense of proportio divina but also of adopting a godlike perspective. The serial recording of the earth’s surface develops parallel to the recording of human physiognomies, which evoke a sense of wonder about how every diverse detail can turn into something typical. The viewer senses the misconception that the face reflects the individual’s authenticity – on the contrary, here the face becomes the arena of a self in which history is mirrored.

The face only “turns into a face when it comes into contact with other faces, when it looks at them or is looked at in return,” writes Hans Belting. In Orlopp’s portraits, we therefore see faces in the process of being looked at. They do not show the “natural” in the sense of the naturalistic, according to John Anthony Thwaites, but rather the human countenance as a symbol. The snapshot is part of the very “nature” of photography, yet Orlopp steeps these moments in a period of seeing and being-seen – a silence, as Orlopp would say. In these facial traits, we seem to find the same dignity and quietude of his photographs of mountain slopes – not, however, as the mirror of the portrayed person’s soul, but as a site reflecting the elementary ambiguousness of the face, of man and of nature.