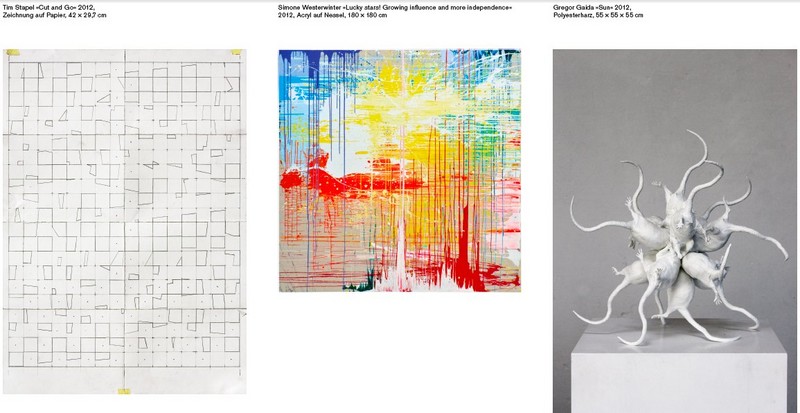 The ornament has been studied in its millennia-old tradition not only as an art form, but also in it’s stylistic development and in the context of human perception. Merged in the artistic practice of Gregor Gaida, Tim Stapel and Simone Westerwinter are functions of the grid and the central motifs of ornamentation, such as symmetry, order and harmony.

In his new group of works, the sculptor Gregor Gaida (*1975 Chórzow/Polen) transforms organic bodies and body parts into polygonal basic bodies. He frequently takes up details of an animal’s body whose form he duplicates and rotates around an axis or a point. Thus, a new self-contained form featuring almost crystalline structures evolves. In the element’s replication, one of the basic conditions of the ornament, Gaida combines the figurative with the abstract. The formerly familiar body thus becomes an ambivalent object of aesthetic reflection, both an appealing and repulsive curiosity which back then had its place in the cabinets of art and wonder.

The random discovery of her exhibition’s title in a Chinese fortune cookie is meaningful for Simone Westerwinter’s (*1960 Stuttgart) current works. In expanding the basic accomplishments of the classical modernism, she consequently devoted herself to the artistic subjects of structure, raster and ornament. In her new works Westerwinter reverses her previous artistic process. She leans the canvas onto the wall in a high angle, throws colour on it, which, through the force of gravity, runs down the surface. While doing this, she turns the developing painting from one side to the other. The gestural self-expression is thus transferred into an omnipresent raster. This is opposed by current works from the series “JA/NEIN“ featuring a linguistic raster as a background.

Tim Stapel’s (*1979 Braunschweig) new works are based on his floor installation „Parcours“, which is currently displayed in the exhibition „Rasterfahndung“ at Kunstmuseum Stuttgart. In this, he folded the squared floor plan of the complete level of the museum in the space that was made available to him. The overlapping areas which are thus created form a multitude of square variations. For Galerie Parrotta Stapel reverses the process of folding by restoring the newly formed square fragments in their original classification system, the raster. However, the works in the gallery space still bear an inscription of their origin – they transfer information from one room into another.