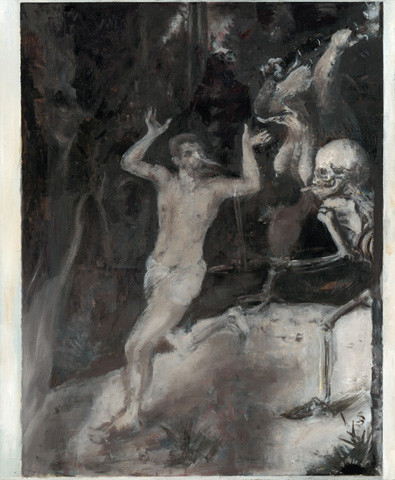 
Frames of reference between original and its media-related communication play a decisive role in Jochen Plogsties’ paintings. In his new series of works, Plogsties uses predominantly artwork from the history of art ¬– conveyed by exhibition catalogues, newspapers or the Internet. Here, he performs the paradoxical act of re-acquirement as a painter. Replica or photocopies of the original pictures are re-interpreted into paintings. However, he does not mask the media-related communication in doing so but occasionally depicts the frames of a computer printout of a Charitas version by Lucas Cranach in his paintings. How much of Cranach is still obvious in the pattern of ink on paper, which is currently located in the artist’s studio as a template? The re-interpretation of such a sheet into a painting is a repetition that proves to be creative/inventive as repetitions within the present state are always joined by a shift spawning something different every time. With this artistic strategy, Plogsties questions himself as a painter competing with the present medium but also the social processes of remembering and forgetting controlled by the media and institutions. Thus, a contemporary picture – reporting of both past and present – evolves.
Jochen Plogsties (*1974) studied at the Akademie der bildenden Künste in Mainz, Germany, with Friedemann Hahn and at the Academy of Visual Arts Leipzig, Germany, with Arno Rink and finally with Neo Rauch, in whose master class he completed his studies. In 2009 he received the scholarship of the Free State of Saxony for the International Studio and Curatorial Program (ISCP) in New York. In the same year he participated in the exhibition „Kunst in Leipzig seit 1949“ (“Art in Leipzig since 1949”) at the Museum der bildenden Künste Leipzig.