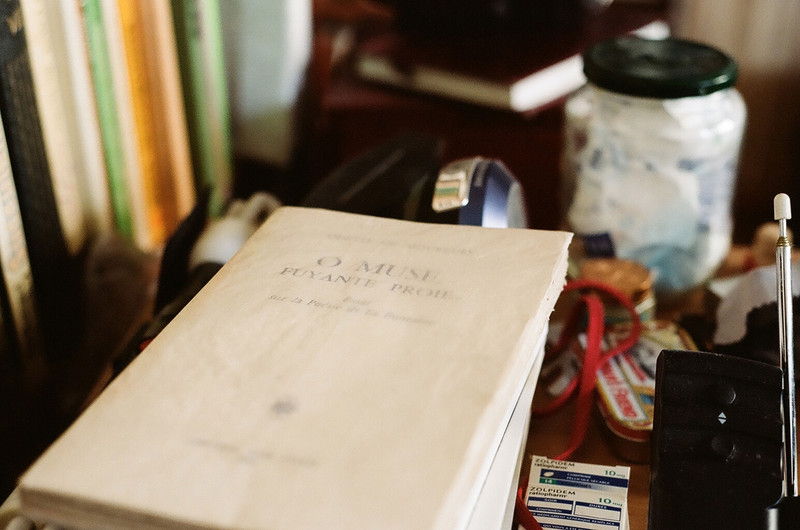 AYE dark blue is how Susanne M. Winterling entitled her group exhibition at Parrotta which is presented alongside her solo exhibition Vertigo. The title and thus the exhibition refer to Derek Jarman’s last film “Blue”. Not a single image can be seen in this film from the first pure sound of bells onwards – only the flicker of an equally pure blue across the screen accompanied by a serene voice telling stories of going blind, saying goodbye and disappearing. “Blue” can be seen as the amaurotic director’s testament, who died shortly after the films premiere. It’s a poetic film reduced to light, sound and language outlining the darkness.
In her work on the subject, Susanne M. Winterling shows a 16mm film in which perfume is sprayed out of a vial. It’s a precise artistic gesture reflecting the possibilities and limits of the film. The glitter of the perfume’s scent in the air becomes an ethereal image for a dimension the film might be able to circle around yet is not able to capture: the scent. Just like the blue is a visible sign for darkness – referring to death as something absolute and unfathomable – the descending fog of the perfume can be regarded as an epitome of transience leaving a trace of light on the film strip as reflection.
Andrea Büttner shares this poetic, or should one maybe rather say religious dimension in her large-sized plain xylograph with the phrase “Yes, I believe every word you say” next to a pressed bouquet in a clip frame. One can imagine a women’s voice behind the rhetoric of this statement – irrational – fragile – possibly hysterical?
Hysteria has been classified as a “female” disease pattern, accompanied by the symptom of dizziness – vertigo. Vertigo in the medical sense means the subjective sensation of spinning or unsteadiness and the feeling of an impending loss of consciousness.
To transfer the feeling of dizziness visually, Hitchcock used the so-called vertigo effect for the first time in his eponymous film. Here, the camera moves towards an object while at the same time zooming backwards to a wide-angle setting without changing the image section. Thus the picture’s centre appears to move away from the viewer while the picture’s frame remains the same creating the optical illusion of dizziness.
In this way both exhibitions, AYE dark blue and Vertigo, are equally playing with a technical simulation of the disappearance of the senses, the body or the consciousness.
www.parrotta.de