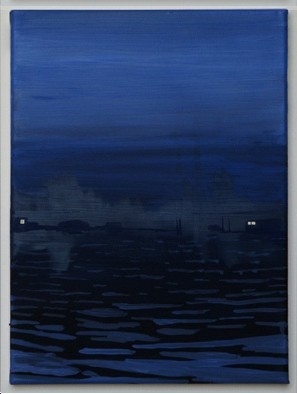 Pilar Parra & Romero is pleased to present “NIGHT WALKER” Aitor Lajarin’s first solo show in the gallery.
Aitor Lajarín’s works are mainly developed in the scope of painting but with an open attitude towards other media such as photography and video as well as different types of materials and techniques that are useful and usable by the artist may he find it appropriate for each project. In general his work revolves around the triangle “place, action, character” creating small narrative fragments which at the same time create broader sets where the viewer looks for hints in order to understand the work, his own socio-cultural context and his personal point of view.
The reference to this show is the city, particularly Los Angeles. The artist has worked for several months in an investigative and creative project about the urban and socio-cultural characteristics of this city, extrapolating this example to other cases which has given it a strong sociological appeal.
Parallel and related to this, Aitor has developed Night Walter, a series of paintings and an installation where he investigates the city from a psychological and experimental point of view. They are presented with a personal diary constructed not only by experiences and personal material but also with different elements taken from movies, texts and internet offering us a series of mental images and places between reality and fiction where we can’t recognize an exact location but yet we find them strangely familiar.
As a connecting point between the two gallery floors there are two murals with the text “Junkyard of dreams”, this phrase is taken from a book by sociologist Mike Davis where he describes the duality of this city, it’s capacity to attract people who want to make their dreams come true (Hollywood mostly) and at the same time it is home to many people who live in some kind of hope for a dream that will hardly come true. As a wink and as part of the show limited editions of t-shirts with this slogan are created. In the big cities souvenir shops sell t-shirts that work as a souvenir and contribute to enlarge the city image, often artificial. This t-shirt will have the same function but a totally demystifying slogan.
Aitor Lajarin was born in Vitoria in 1977, he is temporarily living in Los Angeles. In 2007 he was awarded with the Artium grant for a creation and investigative project in the United States.
www.parra-romero.com
Edit Parra & Romero
Carsten Höller
Copenhagen Contemporary
Copenhagen
Sonia Kacem
Westfälischer Kunstverein
Münster
Lily van der Stokker
Migros Museum
Zürich
Anri Sala
MUDAM
Luxembourg
Kara Walker
Tate Modern
London
Hyslom
Ujazdowski Castle
Warsaw
Ragnar Kjartansson
Kiasma
Helsinki
Charlotte Posenenske
MACBA
Barcelona
Robolights Detroit
MoCAD
Detroit
Hannah Black
Kunstverein Braunschweig
Braunschweig
Iman Issa
Kunstmuseum St Gallen
St Gallen
Tala Madani
Secession
Vienna
Carlos Amorales
Stedelijk Museum
Amsterdam
Bergen Assembly 2019
Bergen
Steirischer Herbst 2019
Graz
Whitney Biennial 2019
New York
58. Biennale di Venezia
Venice
Urbane Künste Ruhr 2019
Bochum
33. São Paulo Biennial
Sao Paulo
6. Athens Biennale
Athens
Manifesta 12 Palermo
Palermo
Riga Biennial 2018
Riga
Liverpool Biennial 2018
Liverpool
Steirischer Herbst 2018
Graz
10th Berlin Biennale 2018
Berlin
Made in L.A. 2018
Los Angeles
Biennale of Sydney 2018
Sydney
New Museum Triennial
New York
Skulptur Projekte Münster
Münster
Documenta 14 Kassel
Kassel
57. Biennale di Venezia
Venice