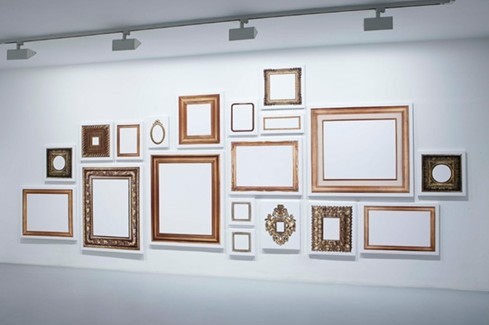 Pilar Parra & Romero is pleased to present “Una idea brillante y otras historias adorables” (A brilliant idea and other adorable stories) by spanish artist Amaya González Reyes.
The exhibition is an invitation, not without certain irony, to a reflection towards criteria arisen from artistic experience and those problems of creation.
Along its path, a common plastic bond to all pieces can be perceived: a golden predominance, a colour that, in a discreet manner makes them “glow by itself”. However, and beyond chromatic pretension, a close look will discover a proposition towards a double game with other stories that are supposed to be adorable: the need of doing, the will to like, to look, to feel pleasure, to poses, to seem to be, to be worth something and so many other matters that take place throughout the process that goes from creation to the exhibition or even beyond that. On the other hand, in this show there is a will to state the existence of two different times- before and after- that go together along with the two main processes of that one who makes it possible and that one who sees it. One cannot fit without the other. In this bond that is created, that unifies or divides according to the occasion, is where the need to share is created. To share, according to the dictionary, is to participate in something, activity that is carried out by the viewer, the art advisor, the artist or even the gallerist with every piece. In this act of sharing there is a distance that is not always to be saved, as if it was a message that goes from ear to ear and along the way, something is lost or won o changed. From the one that creates it to the other one there is just a single interference or link (or that is how it should be) that is the piece and within that jump there are millions of new possibilities that are not the first one, or maybe it is...
“A brilliant idea...” is an exhibition conceived as a project in which all pieces are linked to each other even though they work individually. It’s been thought having as purpose working with the space, with the relationship between pieces and the autonomy of each one and every one, but above all, with the agents and art criteria: situations of the artist, the art advisor, the viewer, the works itself or even the art market, the values and the History.
Amaya González Reyes lives and works in Pontevedra. Recently she has participated in national and international group shows. Among her latest works we could highlight her presence at the Pontevedra Biennial in 2008; “YO GASTO” project (shown at Pilar Parra & Romero in 2008 and later at Solo Projects at ARCO 09); exhibition under title Daring, I want to be a little bit like On Okawara at the Cultural Centre of Montehermosos, Vitoria-Gasteiz in 2008.She has recently been assisted an artists in residence at Museo Serralves, Porto, Portugal., Arteleku, Donostia and Museo La Laboral, Gijón, Spain.
www.parra-romero.com
Edit Parra & Romero
Sonia Kacem
Westfälischer Kunstverein
Münster
Lily van der Stokker
Migros Museum
Zürich
Anri Sala
MUDAM
Luxembourg
Kara Walker
Tate Modern
London
Hyslom
Ujazdowski Castle
Warsaw
Ragnar Kjartansson
Kiasma
Helsinki
Charlotte Posenenske
MACBA
Barcelona
Robolights Detroit
MoCAD
Detroit
Hannah Black
Kunstverein Braunschweig
Braunschweig
Iman Issa
Kunstmuseum St Gallen
St Gallen
Tala Madani
Secession
Vienna
Carlos Amorales
Stedelijk Museum
Amsterdam
Daniel Steegmann Mangrané
HangarBicocca
Milan
Bergen Assembly 2019
Bergen
Steirischer Herbst 2019
Graz
Whitney Biennial 2019
New York
58. Biennale di Venezia
Venice
Urbane Künste Ruhr 2019
Bochum
33. São Paulo Biennial
Sao Paulo
6. Athens Biennale
Athens
Manifesta 12 Palermo
Palermo
Riga Biennial 2018
Riga
Liverpool Biennial 2018
Liverpool
Steirischer Herbst 2018
Graz
10th Berlin Biennale 2018
Berlin
Made in L.A. 2018
Los Angeles
Biennale of Sydney 2018
Sydney
New Museum Triennial
New York
Skulptur Projekte Münster
Münster
Documenta 14 Kassel
Kassel
57. Biennale di Venezia
Venice