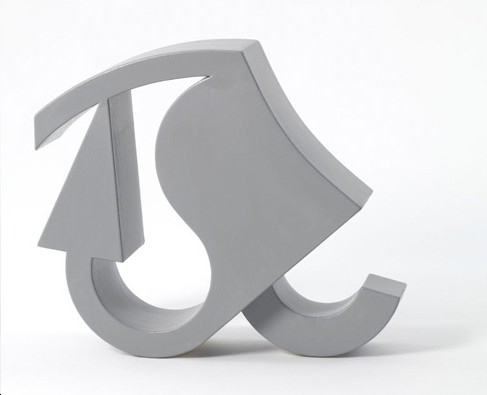 As the first part of this show was, its follow-up is also placed between the boundaries of modernity and modernism. The shows aim remains that of part I, though it will add more artistic viewpoints towards geometric imagery and abstraction and
its different perceptions. The shows richness therefore consists in stimulating the
viewer through the diversity of concepts, all the artists in this show “play” with different approaches to modernism through elements of modern architecture, literature or aspects of the physicality of the human body.

Martin Boyce transforms elements of modernist design into distorted landscapes and
interiors that play on the ambiguous space between reality and fiction. The
arrangement of objects produce an effect evocative of both fifties elegance and cool futurism, allowing the viewer to project infinite narratives. Boyce has been selected to represent Scotland at the 53rd International Art Exhibition - La Biennale di Venezia from June to November this year.

Daniel Buren who is sometimes considered an abstract minimalist, is particularly
compromised with the scene of production. His work is a specific installation for a place. One of his intentions is to create an art that defies a traditional definition of art as an object of aesthetic contemplation, hence decorative is for him something interesting, not negative. Buren is one of the most renowned conceptual and minimal artists in this century, recently he showed at Musée
national Picasso, Paris, Fondazione Zegna, Trivero, Modern Art Oxford and at The
Guggenheim Museum, New York. In 2007 he received the Praemium Imperiale Award for
paintings, given by the Japan Art Association for global achievement in the arts.

Painting directly on to the wall, Neil Campbell transforms the space with his geometric shapes. He toys with the experience of the space and addresses questions
of viewer perception. His varying circles oscillate between evoking a sensation of drawing energy away from the viewer and projecting a kinetic forceoutward.
Campbell ́s contribution to GEOPLAY (Part II), the wall painting “Horizon” was also
shown at the 37th Basel Art Fair in 2006. He recently had a solo show at Galleria Franco Noero in Turin.

Eva Rothschild's sculptures derive from the abstraction of different visual codes and imagery. Her iconography is informed by contemporary culture and also by religion. She is particularly interested in the way objects have a power over us, which is reflected in her fascination with sacred or lucky symbols, ranging from spheres and pyramids to new age charms. From the 29th of june until the 29th of November of 2009 Rothschild will be showing at London ́s Tate Britain and it will not be the first appearance she makes there.

The Berlin based artist Claudia Wieser is inspired by the abstract precision and hythmical balanced arrangement from the Bauhaus era. She is interested in architecture and in nature as a designed living space of humanity. With the reference to the past vocabulary of forms and utopian discourse the artist finds her very own artistic style. Wieser was involved in the opening of Munich ́s Pinakothek der Moderne in 2002 and is currently showing at Sies + Höke Galerie,
Düsseldorf.
www.parra-romero.com