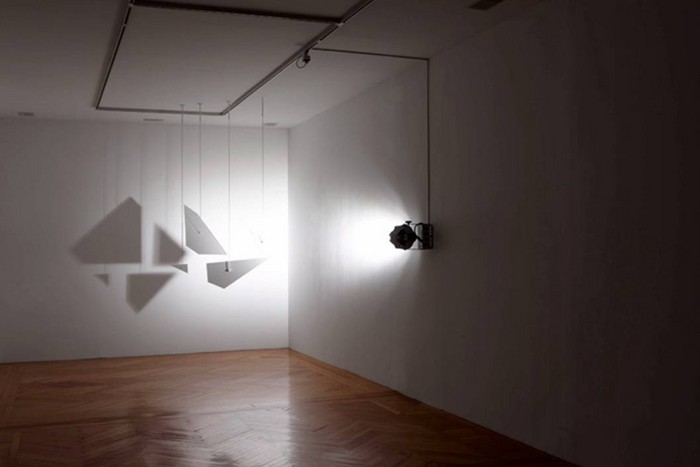 Parra & Romero is pleased to present the first solo exhibition by Germaine Kruip, (1970, Castricum, Holland), which will show a broad range of her conceptual work over the three levels of the gallery. Light, architectural spaces and the interaction between the artwork and the public play a central role in the work of Germaine Kruip, whose architectural interventions slowly change the space or our perception of it. Images from the collective memory, social codes, but also individual associations determine our understanding of what is observed. For all the spaces apparent stillness, time still passed here – and where there’s time there’s change. Transitions from one state to another, and the fact that not a single moment is quite the same as the next, are the presiding concern’ s of kruip show.

A room, 24hours, installation that gives title to the show, consists in a light bulb that slowly moves in the space, drawing one big circle of light in exactly 24 hours which will transform the exhibition space in a continuous and changing stage, while converting us in accomplice of the time: Kruip encourages visitors to imagine a particular set of shadows, reflections and formal relationships that the time code of the exhibition deny them, the hours we don’t see, the hours we are not, or just the ones we can’t perceive. In the main gallery floor, two fragile and perfectly finished objects, Alpaca Ellipse and Gypsum Ellipse refer to essential shapes. Piet Mondrian held the ellipse to be the figure of the unity of antitheses, and Kruip’s show is a meditation on how a set of supposed opposites (day and night, objects and their shadows, the reflected and the reflection) are part of the same, continuous whole.
In a grammatical sense also, an ellipse is an incom-plete sentence: The parts that have been left out can easily be reconstructed using the situation and context, so what we don’t see directly can be filled in by our visual memory.
In the oeuvre of Germaine Kruip, the object is never the object in itself. All objects, topics and motifs that the artist focuses on are tied together and shadowed, mirrored and reflected in a sequential form or (layer of) meaning.
Shadow and light, which is another theme that Germaine Kruip tackles in Alpaca Ellipse, is also present in Circular Shadow, exhibited in the basement of the gallery. Both pieces show how shadows and light can make things look different. Circular Shadow is actually an ellipse, but with the light from a special angle, the shadow is circular, while Alpaca Ellipse is gold colored, making it invisible when standing at certain positions.
The series of ellipses form a beautiful finale to Germaine Kruip’s work. Nature and culture, science and intuition, light and reflection are the opposites combined in imagery.
Image Archive is an ongoing collection of images compiled by Kruip. Two synchronised projectors featuring slides of mostly journalistic and art historical images found in newspapers whose quality leads to their re-occurrence within popular media and consciousness. Their appearance in newspapers suggests an objective representation, however similar images constantly re-appear and question this objectivity. Germaine Kruip’s work focus on the way in which our collective memory functions: it communicates ideas, combinations, and lets the public finds itself in a moral, sometimes possibly uncomfortable, situation: how much trust do we put in what the media tells us and how do we judge that which (we think) we see? Do we as a public simply assume the combinations of Image Archive to be true? How open to interpretation is the image in the view of judgement?
In the performance “I see a landscape”, the (functioning of the) recollection of an image, image references and the image as an icon take centre stage, as in Image Archive. As the rest of the works, the performance plays games with your senses, challenging what you see. The artist’s objective is to investigate our gaze and the way in which we look, more so than to create a new image.
Exhibited in the gallery first floor, Daytime, a specific-site installation whose title suggests a controllability of the concept of “time”, as if time is frozen, condenses the artist’s esthetical preoccupations. In one of the high windows space, every 14 seconds, 5 mirrors turn 360 degrees on their axis bringing the outside world into the gallery and generating an unceasing flow of reflections from outside. The work changes constantly, depending on the quality and intensity of the daylight and what is happening inside and outside, at the time that it rises to the spectator a fundamental question: are we dealing with representations of reality or constructs, portrayals or inventions? At the end of the room, the play of light and dark, shadow and physical form are also the themes of Germaine Kruip's fragile but intense nearby sculptural installation Counter Shadow.This piece recreates un process of progressive abstraction advocated by the Dutch artistic movement “De Stijl”, also known as neoplasticism and founded in 1917 by Théo van Doesburg. Four geometric aluminium forms hang free in a U-shaped, walled-in space which is illuminated by a bright light spot. They are the parts of an object that seems to be disintegrating. The artificial light occupies the space of the natural light and casts shadows as if the sun was playing with it. Daytime, however, allows the natural light to take revenge from the outside and this light interferes with Counter Shadow ‘s artificial play of light: nature conquers any artificially defined border. The migration of light, shadow effects, mirror image and reflection construct images and turn these into a composition, tribute to a Counter Composition by Théo van Doesburg. The exhibition, A Room 24 Hours II, concerns a representative selection from the artist’s exist-ing oeuvre that paints, as completely as possible, a picture of Kruip’s work and working methods. Germaine’s work has been recently exhibited at Sedelijk Museum, Amsterdam, Art Basel 39, Basel, The Approach, London, Museum De Paviljoens, Almere, The Netherlands, Kunstverein für die Rheinlande und Westfalen, Düsseldorf, Germany, Hiroshima Museum of Contemporary Art, Tokyo, Japan, The Drawing Centre, New York and in the MARZ Gallery, Lisbon, Portugal, among others.
www.parra-romero.com