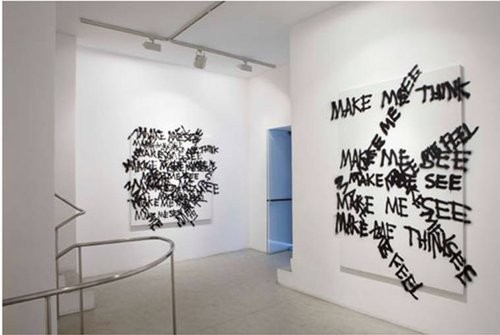 Parra & Romero is pleased to present Permanent Producion of Excess (Red, Green, Blue), by Stefan Brüggemann (1975, México).
Stefan Brüggemann works on the language with a particular approach to the text, combining a formal process of the concept with a radical and critical attitude. As the perfect reflexion of a world, Stefan Brüggemann’s work relates to the facts that surround us, following the construction of the negativism, focusing more in the nihilist than the romantic aspects and including shapes that involve the end of the myths, beliefs and the act of the creation.
His work, sometimes, refers brutally to our society disillusion, letting people facing themselves.
Brüggemann’s work explores a wide diversity of medias, including installation, sculpture, painting, video, drawing or photography.
In Permanent Producion of Excess (Red, Green, Blue), Stefan rewrites Joseph Albers’ colour theory, in which the colour is perceived through the experience, therefore the use of red, green and blue which are the three colours that make television possible. For Albers, the colour has to be understood in its surroundings, as it is almost impossible to see one unique color alone. The origin of this theory came from the Bauhaus and has been principally lectured by Johannes Itten, who developed a diagram with 12 colours and seven different shapes.
Stefan confronts this theory with the actual experiences and influences of everyday life, through mass media and concretely through television. Conceptual Decoration is one of the pieces of this exhibition and consists in wallpaper that covers the galleries entire first floor, with the legend, conceptual decoration, repeated infinitely in red, green and blue. Here the artist uses the bourgeois decadency of the surface decoration to underline the concept. The piece develops a verbal game between the meaning and the representation, putting the visual and the mental in existential crisis.
I ́t not an circle, it ́s not a cero, it ́s not an O (strange ways, here we come); it is composed by three neon circles produced also in red, green and blue. This reminds us of the limitation of technological perfection in which a circle created with this material will never be completely perfect because it has to be divided in two points for its electrical connection and returning to the conceptual fundaments, where media is the message.
Make Me are paintings manufactured directly on the gallery walls with black spray. On the canvas are repeated three sentences: Make me feel, Make me see, Make me think, using the artist’s calligraphy.
Stefan Brüggemann (b. 1975, Mexico D.F) lives and works between Mexico D.F and London. His work is currently exposed in: Where Do We Go From Here? Selections from La Colección Jumex Bass Museum of Art, Miami., SHOW TITLES, Kunsthalle Lissabon. Portugal and "I'm not here. An exhibition without Francis Alÿs", De Appel Arts Centre, Amsterdam.
Recently he has exhibited in Black Box, individual exposition created by Philippe Pirotte and Eva González-Sancho, in the Kunsthalle of Bern and in Frac Bourgogne of Dijon, France, 2008.
Among the outstanding group shows are: Social Sculpture: New Generation of Art from Mexico City; MCA, Chicago, 2007; Nothing, Schirn Kunsthalle Frankfurt, 2006; Off-key, curated by Philippe Pirotte, Kunsthalle Berna, Switzerland 2006 and Beck’s Futures Award, ICA, London, 2006.
Recent publications: JRP Ringier publication edited by Nicolás de Oliveira with rehearsals of Chris Kraus, Michael Bracewell and Caoimhín Mac Giolla Léith.
www.parra-romero.com