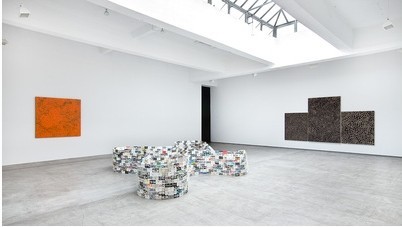 NEW YORK – The Paula Cooper Gallery presents an exhibition of works by Bruce Conner, Yayoi Kusama and Christian Marclay. The show will be on view through December 23, 2011.

The exhibition includes two striking Bruce Conner works from the 1970s. CROSSROADS, a 1976 film, shows footage from the American nuclear tests in the Bikini Atoll unfolding in extreme slow motion, with a soundtrack by praised avant-garde composers Patrick Gleeson and Terry Riley. In Conner’s hands, the historic images become visually haunting and achingly beautiful, a meditation on human madness and frailty. UNTITLED TRIPTYCH, from 1974, reminiscent of a medieval altarpiece with its central vertical panel flanked by two smaller panels, achieves a high visual intensity through dense patterns of organic black shapes separated by thin lines of unpainted linen.

Yayoi Kusama’s work has long depicted accumulations of abstract natural forms based on a hallucinatory imagery of polka dots and “infinity nets.” The 1964 Accretion (no. Q), a hypnotic collage of black and white photographs, recalls the artist’s famed statement: “You might say that I came under the spell of repetition and aggregation. [...] I was always standing at the centre of the obsession, over the passionate accretion and repetition inside of me.” 1

Tape Fall, a seminal 1989 work by Christian Marclay, gurgles in the adjacent gallery. The piece consists of magnetic tape streaming down from an elevated tape recorder and accumulating on the floor to the sound of trickling water. The work is “a monumental sculpture that memorializes nothing more than the passage of time, and destroys its own materials in the process of creating itself.”2 Two more Marclay works are included in the exhibition: the stunning Moebius Loop (1994), made of myriad tapes woven side by side, and the roughly contemporaneous Echoes, with its woven organic shapes created through the technique of the Rorschach inkblot.

For more information and images, please contact the gallery: (212) 255-1105; info@paulacoopergallery.com