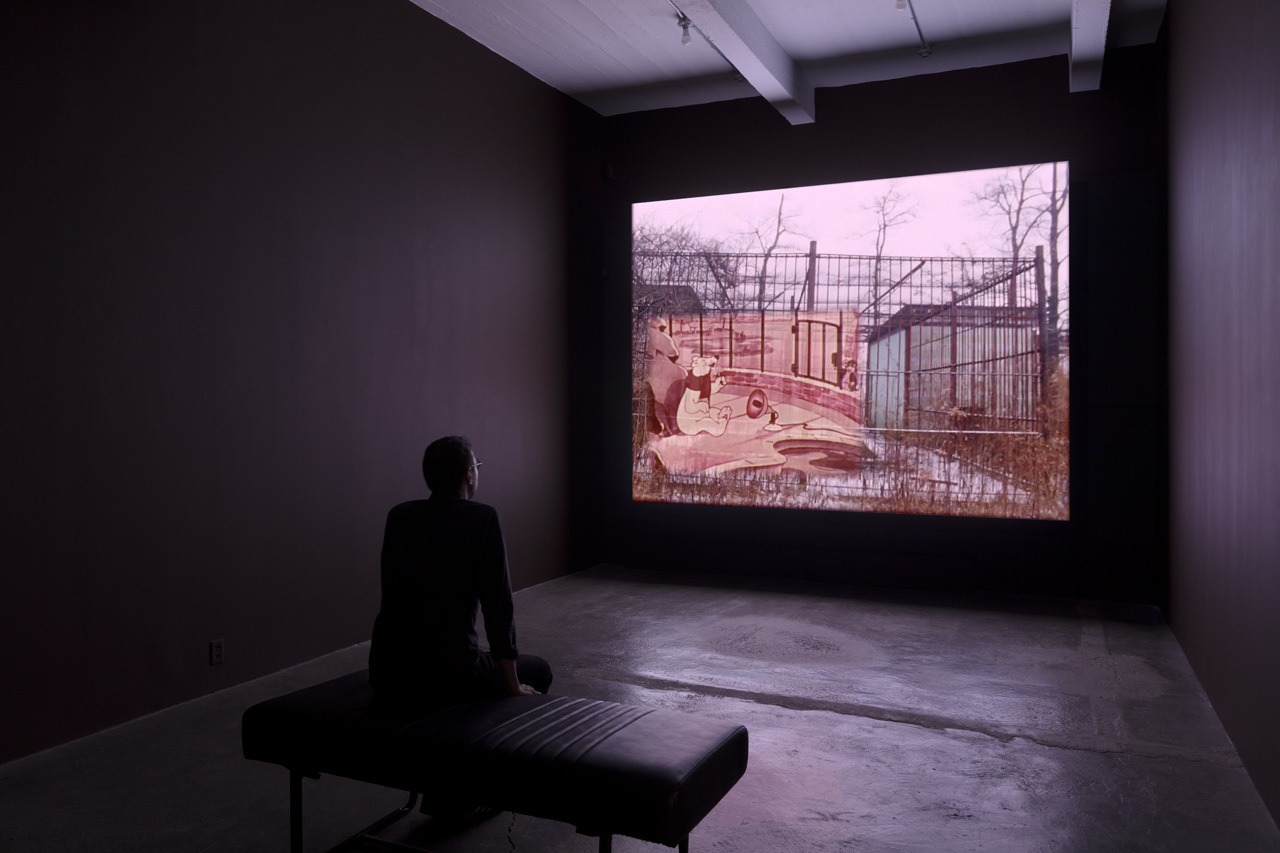 NEW YORK—On view from September 7 through October 12, 2019, is an exhibition of Amy O’Neill’s film The Zoo Revolution. Created between 2006 and 2019, the film combines original and found footage to examine the derelict remnants of twentieth-century Americana through a lens that is both personal and political. Raised in the 1970s and 80s in the Pennsylvania Rust Belt, O’Neill interrogates the region’s history of industrial decline and economic uncertainty, isolating cultural narratives that continue to resonate today. Texturized by pulsing camerawork, layered imagery, and traces of archival matter, The Zoo Revolution evokes the affective and perceptual experience of recollection—in which vivid details punctuate hazy or enigmatic abstractions. Presented at 521 W 21st Street, the exhibition opens with a public reception on Friday, September 6th from 6 to 8pm.

Set to a riotous death-metal soundtrack by the band Orphan, The Zoo Revolution brings together footage of an abandoned petting zoo and storybook forest, shot on 16mm film under the direction of O’Neill over the past decade and a half. A childhood destination for the artist and her family, the site’s present state of disrepair is captured from the street or through bushes, evoking a first-person vantage of spontaneous trespass and furtive discovery. “Today the original snack bar, rusted cages, and the Old Woman Who Lived in a Shoe house are invaded by wild brambles and on the verge of disappearance.” The subjective camera moves rapidly from one shot to the next, imbuing the film with an urgent vitality paradoxical to its neglected subject matter—a place that ceased to exist decades ago.

Through an extensive process of editing, reshoots, digital transfers and color adjustments, O’Neill layers the film’s images. Excerpts from a children’s cartoon have been injected throughout the piece. “I can’t remember precisely when I first saw [this] short, but I like to imagine digesting [it] during my first-grade class’s ‘slow’ period, in a cool and darkened classroom after lunch,” O’Neill writes. The animation comes from Fima Noveck Productions. Known as the “film doctor” for his ability to edit and re-dub cartoons made in Eastern Europe during the late 1930s through the 1950s, Noveck tailored the animations for American audiences—in this instance, the animation titled Ein verbotener Ausflug (A Forbidden Excursion) by Gerhard Fieber and first released in Germany in 1952. In the footage excerpted by O’Neill, a mischievous monkey, giraffe, lion and polar bear collude to escape from a zoo, fleeing by locomotive. Arousing a vanishing vision of postwar America, the cartoon’s rosy tint and playful plot collides with overtones of entropy, dissolution and decay—as well as notions of fiction, metaphor, mythology and memory. The final work, O’Neill explains, aims “at questioning how childhood souvenirs bring us to our current Trumpian juggernaut of telling tales. Or, as the cognitive psychologist Ulric Neisser once said about memory: ‘Out of a few stored bone chips we remember a dinosaur.’”

Born in 1971 in Beaver, PA, O’Neill is well-known for her mixed-media sculpture, work on paper, installation and film. She received her BFA from Pratt Institute in Brooklyn, NY, and her MFA from Cranbrook Academy of Art in Bloomfield Hills, MI. Her work has been exhibited internationally including at Le Consortium, Dijon, France; MAMCO, Geneva, Switzerland; Sculpture Center, New York; Swiss Institute, New York; Centre Cultural Suisse, Paris; Wexner Center for the Arts, Columbus, OH; and MoMA PS1, New York. In October 2020, O’Neill will participate in a show at the Center Pompidou Metz. Her work is represented in numerous private and public collections including Frac Basse Normandie in Caen, France, and the Museum of Modern Art in New York. O’Neill also has several monographs and artist’s books on her work, including Red Headed Stranger (Karma, 2014), Forests, Gardens & Joe’s (J & L Books/Centre Culturel Suisse, Paris, 2011), The Old Woman’s Shoe (One Star Press, 2009) and Amy O’Neill: Suburban Imagination (JRP Ringier, 2008). The artist currently lives and works in New York.