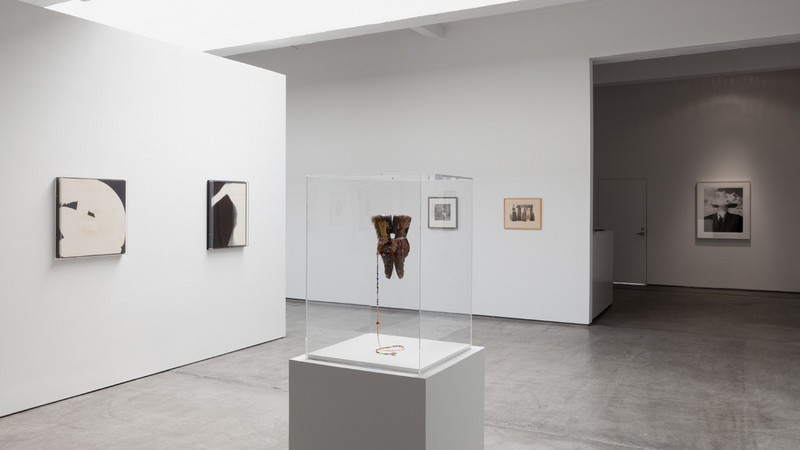 NEW YORK—The Paula Cooper Gallery is pleased to present an exhibition of work by Bruce Conner, on view from April 30th through June 26th. The exhibition will focus on Conner’s approach to figuration throughout his 50-year career. There will be an opening reception on April 30th from 6 – 8pm.

Few artists have mastered such diverse art forms as Conner, who worked in sculpture, collage, painting, drawing and film. In his earliest works, the artist drew from atavistic and macabre subject matter, which he rendered in an intense, overloaded visual field. On view are several of his 1955 ink-on-paper drawings which depict the mythological winged beast, Geryon, from Dante’s Inferno. Densely drawn in inky black against white paper, the artist explores the interplay between dark and light, eerie and beautiful, sacred and profane.

Conner moved to San Francisco in 1957 from his hometown of Wichita, Kansas. He found in the Bay Area counterculture the same desire to express a mystical alternative consciousness that went hand in hand with the seedy, gritty reality of the everyday. It was there that he began his assemblages—strange mixed media constructions using scavenged materials like nylon stockings, and feathers—with works like FLOATING HEAD. In late 1961 Conner and his wife, Jean, took a year-long sojourn to Mexico City where he experimented with hallucinogenic mushrooms. Continuing his films and assemblages, the artist also created airy, kaleidoscopic pencil drawings inspired by the local religious iconography and ancient architecture—eight of which are included in the exhibition.

Perhaps best known for his experimental films, Conner’s 1964 work VIVIAN, is a joyful portrait of actress Vivian Kurz. Shot from a handheld camera, the artist trails Vivian as she preens and frolics through his 1964 Batman Gallery show in San Francisco. Collaged from grainy, disjointed footage into a dense 3-minute reel, Vivian becomes a dizzying and elusive object of desire. Conner’s early films were almost exclusively filmed in black-and-white, and prompted him to further explore the visual effects of light and dark throughout the 1970s.

The ANGEL photograms—quiet, ethereal self-portraits—were created in collaboration with Edmund Shea by affixing long sheets of light-sensitive photographic paper to the wall while Conner, nude and standing on a platform, pressed his body against the paper while the camera flashed. The resulting images, DEPARTING ANGEL and BOWING ANGEL, trace the outline of his body, dotted with constellations of grey and white, so that the silhouette seems to dissolve into abstraction.

In 1978, Conner began using black-and-white photography to document the punk music scene in San Francisco. 27 PUNK PHOTOS capture the itching, restless energy of the underground shows held at Mabuhay Gardens: the artist remarked, “I had always liked the idea of action photos... Like-sport events. Basketball. They’re floating in the air, part of this suspended sphere, and they’ve got these beatific looks on their faces, they’re in anguish. Or combat photography” (Bruce Conner Mabuhay Gardens, Düsseldorf: NRW Forum Kultur und Wissenschaft, 2006).

The exhibition will also feature a selection of figurative collages from 1989-2002, drawn from scraps of 19th century engraving books and modern technical drawings. These constructions recall the Surrealist collages of Max Ernst, but with Conner’s distinctive psychedelic edge.

Conner’s work is currently exhibited at the “YES! Glue: A Half-Century of Collage by Bruce and Jean Conner,” at the American University Museum in Washington DC, and “Bruce Conner: Somebody Else’s Prints” at the San Jose Institute of Contemporary Arts in San Jose, California. In 2000, the Walker Art Center in Minneapolis organized an exhibition of Conner’s work titled “2000 BC: The Bruce Conner Story, Part II” which traveled to the Modern Art Museum of Fort Worth, the M.H. de Young Memorial Museum in San Francisco, and the Los Angeles Museum of Contemporary Art. His works have been included in major exhibitions, such as the historic 1961 “The Art of Assemblage” at The Museum of Modern Art. His works are in the collections of many major museums, including The Guggenheim Museum; The Metropolitan Museum of Art; The Whitney Museum of American Art; The Museum of Modern Art; The San Francisco Museum of Modern Art; Los Angeles County Museum of Art; The Walker Art Center, Minneapolis; The Art Institute of Chicago; The National Gallery of Art, Washington DC; Hirshhorn Museum and Sculpture Garden, Washington DC; and The Centre Pompidou, Paris.
www.paulacoopergallery.com