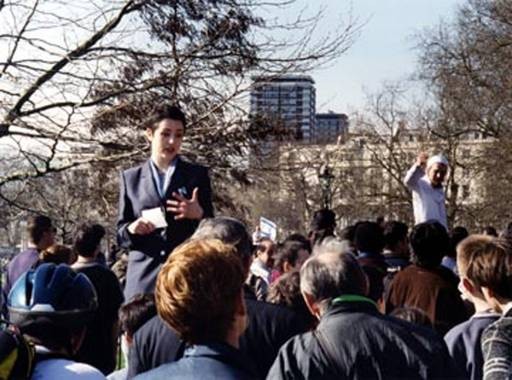 Young's work employs a variety of media such as video, installation, photography and text, and often takes the form of a performative system or process involving tools and language appropriated from the sphere of global business. The exhibition includes works that develop Young's interest in corporate and legal languages and their effects on human agency.

Body Techniques (2007) is a new series of photographs that considers the interrelationships between art and globalized commerce. Set in the vast building sites of Dubai and its neighbour Sharjah, we see Young alone and dressed in a suit, her actions reworking some of the classic performance-based works associated with Conceptual art, including pieces by Richard Long, Bruce Nauman, Mierle Laderman Ukeles, Dennis Oppenheim and Valie Export.

The locations for Young's photographs are a series of empty, uninhabited 'new build' developments reminiscent of Las Vegas, rising from the desert's tabula rasa aimed at bombastic luxury and spectacle and intended for thousands of incoming Western corporate executives. The architectural style is consummate ‘global village’ - a business theme park composed of swathes of multinational HQs and Italianate McVillas. These non-places could eventually compose an entire world-view: a hyperreal, corporate vision of utopia. Half-constructed backdrops are used as a 'stage' for the action, with the artist appearing as one tiny individual, overwhelmed, dislocated from, or even belittled by the corporate surroundings, while dressed up to play a role within it.

Carey Young was born in Lusaka, Zambia, in 1970, and earned a Masters in Photography from the Royal College of Art, London, in 1997. Her work has been presented at Secession, Vienna (2001), Kunstverein Munich (2002), the Whitechapel Gallery, London (2003), Sharjah Biennial 7 (2005), ZKM, Karlsruhe (2005), Vancouver Art Gallery (2005), the Hayward Gallery, London (2006) and the Moscow Biennale (2007). Her work is in several major public collections, including the Tate Modern, Arts Council England and the Centre Pompidou. This will be the artist's second one-person exhibition at the gallery, after 'Consideration' (2005), part of the Performa05 Biennial, in which the artist investigated the connections between legal contracts and performance by inviting the viewer to enter a series of contractual relationships with her.
www.paulacoopergallery.com