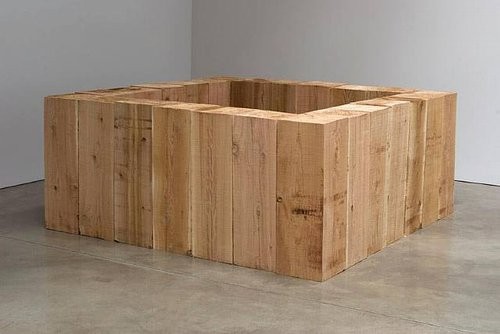 The Paula Cooper Gallery is pleased to present an exhibition of new works by Carl Andre, on view at 534 West 21st Street from September 4 through October 11.
Continuing his strategy of arranging standardized elements in geometric configurations, Andre’s new works take pre-cut columns of western red cedar wood as their constituent building blocks. Placing these timbers upright, Andre has delineated quadrilateral perimeters in an increasing numerical progression. This rational ordering system made visible in cedar wood animates the artist’s long-held interest in the relationship between the material, physical world and the theoretical world.
Andre started his career as a sculptor working with wood. In 1958-1959, he was carving wood timbers using a chisel or saw to create abstract pieces with geometric, often symmetrical patterns. These early works recalled both the verticality and symmetry of Brancusi’s sculptures and the rigorous logic of the paintings of Frank Stella, whose studio Andre was sharing at the time. In 1960, Andre started his Elements series, using identical timbers of equal size in various configurations. This series marks the moment when Andre definitively abandoned the manipulation of materials. He progressively moved on to materials such as granite, limestone, steel, lead and copper.
Andre’s first one-person show was held in 1965 at the Tibor de Nagy Gallery, New York, and the following year his work was included in Kynaston McShine’s and Lucy Lippard’s seminal exhibition “Primary Structures” at the Jewish Museum. He was, with Donald Judd, Dan Flavin and Robert Morris, one of the leading artists of the 1960s and often associated with Minimalism. In the 1970s, the artist created large installations, such as 144 Blocks and Stones (1973) for the Portland Center for the Visual Arts, Oregon, and outdoor works such as Stone Field Sculpture (1977) in downtown Hartford, Conn.
Andre’s work has been the subject of several retrospectives, most notably at the Solomon R. Guggenheim Museum, New York, in 1970; the Laguna Gloria Art Museum, Austin, Texas, in 1978; the Whitechapel Art Gallery, London, in 1978; the Stedelijk Van Abbemuseum, Eindhoven, in 1987; the Haus Lange und Haus Esters, Krefeld; the Kunstmuseum, Wolfsburg, in 1996; and the Musée Cantini, Marseilles, in 1997. He lives in New York.
For more information, please contact the gallery: (212) 255-1105, anthony@paulacoopergallery.com
www.paulacoopergallery.com