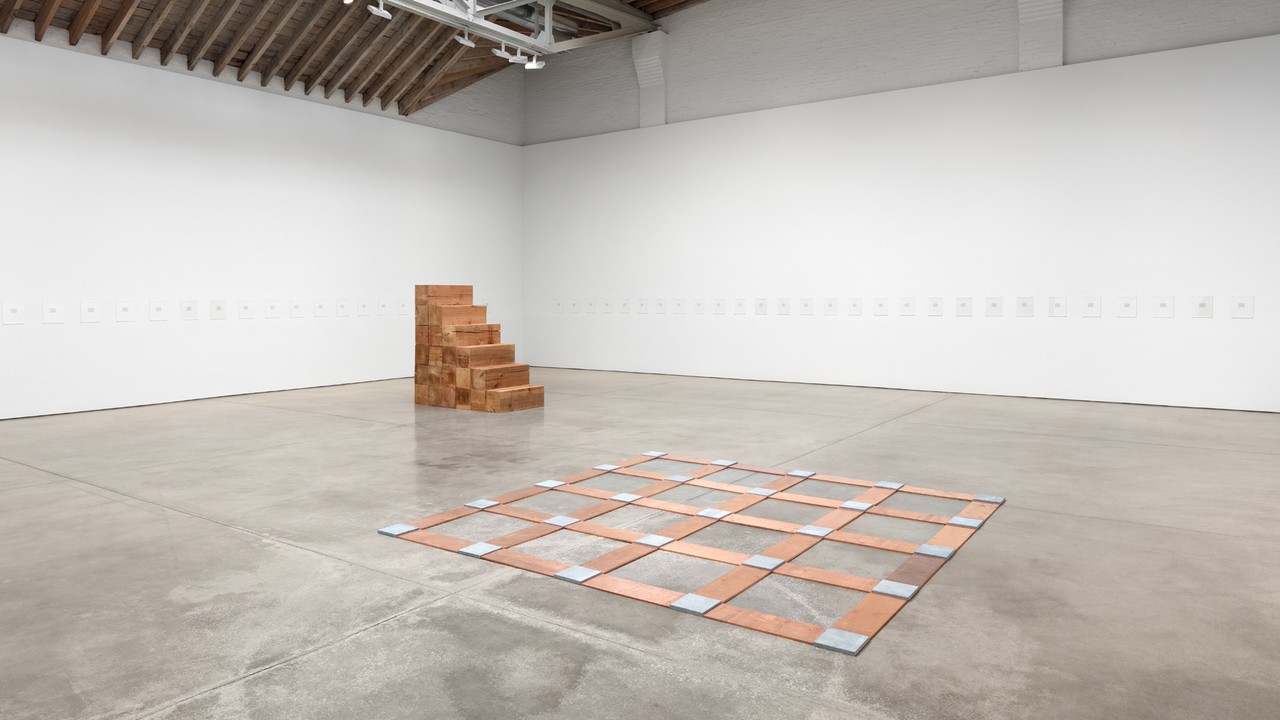 NEW YORK – Paula Cooper Gallery is pleased to announce two one-person exhibitions at 534 West 21st Street opening May 10, 2018: Carl Andre and Lynda Benglis. The presentations celebrate both artists’ long history with the gallery, as they first exhibited with Paula Cooper in 1968 and 1969 respectively, and demonstrate their contemporaneous yet markedly divergent approach to process and material. The exhibitions will be on view through June 16th, 2018. There will be an opening reception on Thursday May 10th from 6 to 8pm.

On view is Andre’s floor sculpture, Copper Blue Lattice, New York, 1990, comprised of sixty-five copper and limestone tiles as its constituent building blocks. Laid in a grid arrangement on the floor, Andre underscores the specificities of matter—which Andre considered his “palette”—and the relationships between element and whole. Also on view by Andre is his work of poetry entitled One Hundred Sonnets, composed of 100 typewritten pages each bearing a single word repeated multiple times in a square pattern.

Creating work that is often irreverent and sardonic with strong sociopolitical underpinnings, Lynda Benglis is well known for her gestural and process driven works that provided a timely retort to her contemporary Minimalist—and predominately male—peers. “I always wanted to approach organic form in a very direct way, in the way that he [Andre] approached geometric form. It has to do with knowing about materials. I found, in approaching organic form, that it was quite necessary to know about the change of matter and the timing and the flow of the material. I felt I wanted to define for myself the organic phenomena; what nature itself would suggest to me in sculpture. I wanted it to be very primal, suggestive but not too specific; very iconographic but also very open”1 On view by Benglis is one of her iconic early floor pieces, composed of brightly pigmented poured latex, as well as new works and a selection of earlier wall pieces. These explorations of metaphorical and biomorphic shapes demonstrate the artist’s interest in the physicality of form and its affect on the viewer, using a wide range of materials to render dynamic impressions of mass and surface: soft becomes hard, hard becomes soft and gestures are frozen.

Carl Andre was born in Quincy, MA in 1935. Andre’s first one-person show was held in 1965 at the Tibor de Nagy Gallery, New York, and the following year his work was included in Kynaston McShine’s and Lucy Lippard’s seminal exhibition “Primary Structures” at the Jewish Museum. He was, with Donald Judd, Dan Flavin and Sol Lewitt, one of the leading artists of the 1960s, often associated with Minimalism. In the 1970s, the artist created large installations, such as 144 Blocks and Stones (1973) for the Portland Center for the Visual Arts, OR, and outdoor works such as Stone Field Sculpture (1977) in downtown Hartford, CT. Andre’s work has been the subject of several retrospectives, most notably at the Solomon R. Guggenheim Museum, New York, in 1970; the Laguna Gloria Art Museum, Austin, TX, in 1978; the Whitechapel Art Gallery, London, in 1978; the Stedelijk Van Abbemuseum, Eindhoven, in 1987; the Haus Lange und Haus Esters, Krefeld; the Kunstmuseum, Wolfsburg, in 1996; and the Musée Cantini, Marseilles, in 1997. In 2014 the Dia Art Foundation presented Andre’s first North American retrospective since 1978, which traveled to Museo Nacional Centro de Arte Reina Sofia, Madrid, Spain (5/7 – 10/12/15), Hamburger Bahnhof Museum für Gegenwart Berlin, Germany (5/7 – 9/25/16), Musée d’Art Moderne de la Ville de Paris, Paris, France (10/20/16 – 2/12/17), and The Museum of Contemporary Art, Los Angeles, CA (4/2 – 7/24/17). The artist currently lives in New York.

Lynda Benglis was born in 1941 in Lake Charles, Louisiana and received her B.F.A. in 1964 from Newcomb College, the coordinate women’s college of Tulane University located in New Orleans. Her work has been exhibited extensively both within the U.S. and abroad. In 2010 Benglis was the subject of an international retrospective, which traveled to The Irish Museum of Modern Art, Dublin; The Van Abbemuseum, Eindhoven; Le Consortium, Dijon; New Museum, New York; and the Museum of Contemporary Art, Los Angeles. Other important one-person exhibitions include “Lynda Benglis,” in 2016 at Aspen Art Museum, Aspen, CO; “Lynda Benglis: Water Sources,” in 2015 at Storm King Art Center, New Windsor, NY; and “Lynda Benglis: Dual Natures, Retrospective,” in 1991 at High Museum of Art, Atlanta, GA (traveled to Contemporary Art Center and New Orleans Museum of Art, New Orleans, LA; and San Jose Museum of Art, San Jose, CA). She is the recipient of a Guggenheim Fellowship and two National Endowment for the Arts grants, among other commendations. Benglis’s work is in extensive public collections including: Guggenheim Museum; Los Angeles County Museum of Art; Museum of Modern Art, New York; The National Gallery of Victoria, Melbourne, Australia; San Francisco Museum of Modern Art; Tate Modern, London; Walker Art Center, Minneapolis and the Whitney Museum of American Art, New York. Benglis currently resides in New York, Santa Fe and Ahmedabad, India.