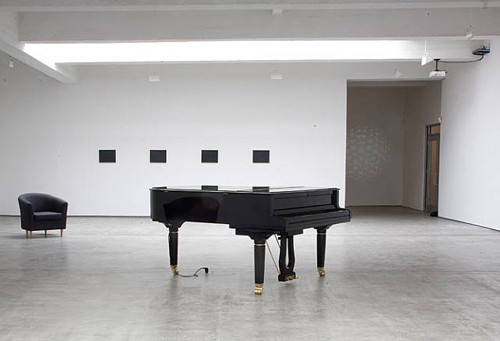 NEW YORK – The Paula Cooper Gallery is pleased to announce a one-person show by Céleste Boursier-Mougenot, on view at 521 West 21st Street from March 19 through April 25.
Céleste Boursier-Mougenot’s work merges the realms of the musical and the visual, mining unexpected sources for their musical potential and creating situations or devices in which sonic events get expressed visually or visual informational gets expressed sonically. Calling on ideas about technological production, language, chance operations and systems of translation, Boursier-Mougenot’s work converges multi-sensory phenomena with a cerebral investigation of the mechanisms of sight and sound in his given situations.
On view in this exhibition will be the artist’s piece index. This work hinges on a computer program designed by the artist that translates fragments of language typed on the gallery’s office computers into a musical score played in real-time by an acoustic piano placed in the gallery. The program isolates a set of notes, dynamics and other musical terms from the language typed on the gallery’s computers to build its ongoing score. Acting as conductor, composer, and instrumentalist all at once, the piece renders an in situ musical phenomenon that registers the labor of the gallery and plays it in song.
Also on view will be the artist’s video loop projection virus, showing in barely visible form the evolving shapes that result from a feedback of a video camera stationed in front of a monitor. Boursier-Mougenot will also present silkscreens titled solidvideo, eachbased on a unique frame extracted from the video sequence. In addition, he will show the photograph detail from an installation in which birds flew around the gallery and landed on the strings of amplified electric guitars.
A native of Nice, Céleste Boursier-Mougenot was born in 1961. He lives and works in Sète, France. His work has been exhibited in venues such as the capcMusée, Bordeaux, France (1997), ICC - InterCommunication Center, Tokyo (2000), the Herzliya Museum of Art, Israel (2001), the “Printemps de Septembre” in Toulouse, France (2004) and the Contemporary Art Museum, Tampa, Florida (2005). In 2006, Boursier-Mougenot presented états seconds a one-person exhibition at the FRAC Champagne-Ardennes in Reims, France. His work is in major public and private collections around the world, including Centre Georges Pompidou, Paris, the Museum of Old and New Art, Hobart, Tasmania, the Israel Museum, Jerusalem, the San Diego Museum of Contemporary Art, La Jolla, CA, the Fonds National d’Art Contemporain, Paris, and several Fonds Régional d’Art Contemporain (FRACs) in France. His monograph, états seconds, was published by Analogues in Arles, France in 2008 and is available from the gallery.
index is presented in New York in collaboration with superposition and Les Pianos Pleyel (Production: superposition. Co-production: théâtre2gennevilliers with the support of DICREAM – Ministry of Culture and Communication and the Renos Xippas Gallery). The manufacturers of exclusive pianos in Paris since 1807, Les Pianos Pleyel are proud to have partnered with Céleste Boursier Mougenot as they continue to support musical and artistic creation.
www.paulacoopergallery.com