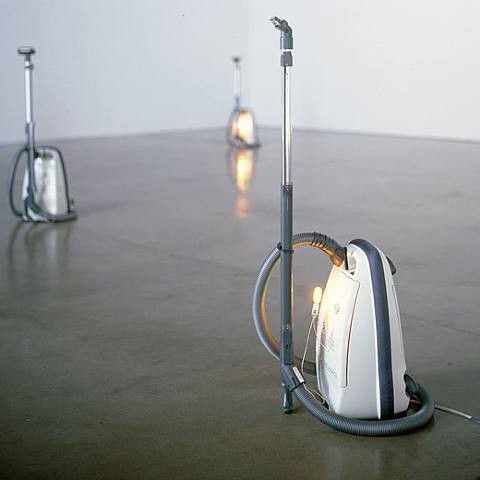 NEW YORK – The Paula Cooper Gallery will present Céleste Boursier-Mougenot’s sound installation, harmonichaos, in its space on 23rd Street. The exhibition will open on February 19 and will remain on view through March 13, 2010.
harmonichaos consists of vacuum cleaners outfitted with harmonicas, lights and sound-frequency analyzers. As the vacuums turn on and off, the harmonicas fill the darkened space with sound. The installation will make use of architectural space to explore the viewer’s relationship to sound and sculptural objects.

The exhibition will coincide with "New Commission for the Curve," a one person show at the Barbican Centre for Contemporary Art, London (27 February - 23 May 2010), and Céleste Boursier-Mougenot, another one-person exhibition at La Maison Rouge, Paris (19 February – 23 May, 2010).

A native of Nice, Céleste Boursier-Mougenot was born in 1961. He lives and works in Sète, France. His work has been exhibited in venues such as the capcMusée, Bordeaux, France (1997), the ITT InterCommunication Center, Tokyo (2000), the Herzliya Museum of Art, Israel (2001), the "Printemps de Septembre" in Toulouse, France (2004) and the Contemporary Art Museum, Tampa, Florida (2005). In 2006, Boursier-Mougenot presented “états seconds,” a one-person exhibition at the FRAC Champagne-Ardenne in Reims, France. He recently took part in the 3rd Moscow Biennale, curated by Jean-Hubert Martin. His work is in major public and private collections around the world, including the Israel Museum, Jerusalem, the San Diego Museum of Contemporary Art, La Jolla, CA, the Centre Pompidou, Paris, the Fonds National d’Art Contemporain, Paris, and several Fonds Régional d’Art Contemporain (FRACs) in France.
www.paulacoopergallery.com