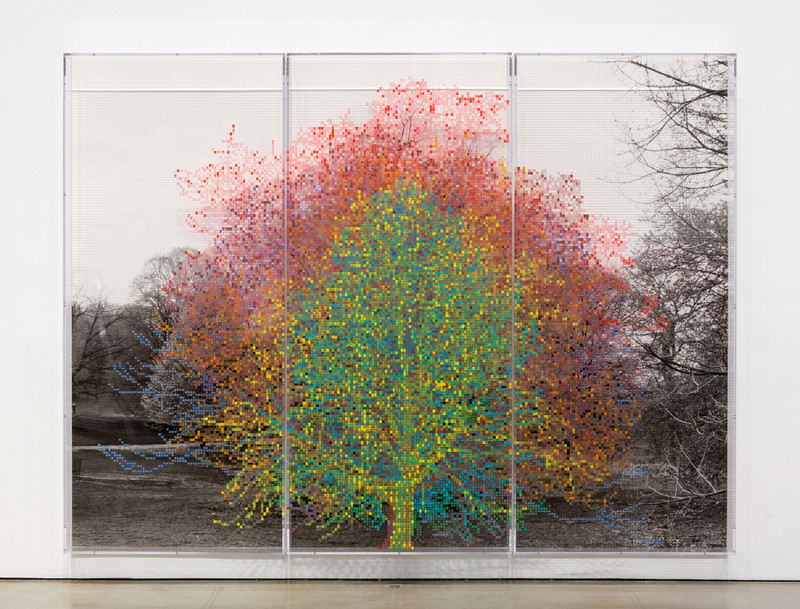 NEW YORK – The Paula Cooper Gallery is pleased to present a group of eight new large-scale triptychs by Charles Gaines, entitled Numbers and Trees: Central Park Series I. The works constitute a continuation of this prolific artist’s acclaimed series, Numbers and Trees, begun in 1987. The exhibition will be on view at 534 West 21st Street from March 31 through April 30, 2016. There will be an opening reception on March 31 from 6 – 8 pm.

For more than forty years, Charles Gaines’ art has explored the relationship between aesthetics, politics, language and systems. Gaines employs rule-based methodologies to investigate ways in which meaning can be experienced in images and words. Informed by sources as varied as Tantric Buddhist drawings, the systemized work of Hanne Darboven, and John Cage’s notions of indeterminacy, Gaines creates work that often employs plotting and mathematics to organize visual components. While appearing systematic and scientific, Gaines’s works ultimately refrain from producing empirical knowledge, preferring instead to invoke the viewer’s subjective response. They explore an individual’s perception, expression and speculative thought, as they operate both within and against a system.

Charles Gaines’s new work, Numbers and Trees: Central Park Series I, marks an extension of his early interest in serialized projects. For each of his eight triptychs, Gaines divides and mounts a black and white photograph of a tree in Central Park, taken at the time of the artist’s 2014 exhibition at the Studio Museum in Harlem. Enclosing each panel within an acrylic box, screened with grids of half-inch squares, he graphs the silhouette of the tree directly onto the overlaid acrylic surface. Filling cells with vibrant paint, Gaines plots numbers to index the leaves and branches of each tree; he begins at the center of the trunk, counting outward in both directions to create a pixelated image guided by a numerical system. As the series progresses, the catalog of previous trees, each denoted by a different hue, appears on every subsequent triptych, resulting in a prismatic kaleidoscope of layered colors. The cumulative effect bridges the expressive sublime with the schematic referent.

Also on view are six new works from Gaines’s Librettos: Manuel de Falla / Stokely Carmichael series. These works unite a score by composer Manuel de Falla from his 1904 Spanish opera La Vida Breve –a tragic story of a love affair doomed by social mores and class differences– with the language of an impassioned and oratorically rhythmic 1967 speech by Stokely Carmichael (a Black Panther Party member and civil rights activist), in which Carmichael advocates that African Americans refuse to serve in the Vietnam War as an act of self-determination in the face of oppression. Transposing Carmichael’s speech as operatic libretto, Gaines activates text as the measure of process and duration and reveals affinities between these seemingly discordant sources. The nuanced combination of music and text composes a ballad for the enduring history of race-class inequalities as well as the capacity for art to provide emotional egress.

Born in 1944 in Charleston, South Carolina, Charles Gaines received his MFA from the Rochester Institute of Technology in 1967. Gaines has been the subject of several one-person exhibitions, including the major career surveys, Charles Gaines: Gridwork 1974-1989, at The Studio Museum in Harlem in 2014 (traveled to the Hammer Museum, Los Angeles) and Charles Gaines: In the Shadows of Numbers at the Pomona College Museum of Art and the Pitzer College Art Gallery in Claremont, California in 2012. He participated in the 2014 Montreal Biennial and the 2015 and 2007 Venice Biennales, as well as in notable group exhibitions at the Los Angeles County Museum of Art; Museum of Contemporary Art, Los Angeles; Hammer Museum, Los Angeles; Museum of Contemporary Art, Chicago; The Drawing Center, New York; Lentos Kunstmuseum Linz; Deichtorhallen, Hamburg; Kunsthalle Basel; and Contemporary Art Museum, Houston. Gaines has published several essays on contemporary art, including “Theater of Refusal: Black Art and Mainstream Criticism” (University of California, Irvine, 1993) and “The New Cosmopolitanism” (California State University, Fullerton, 2008). His works are in the collections of the Hammer Museum, Los Angeles; Museum of Contemporary Art, Los Angeles; the Museum of Modern Art, New York; the Whitney Museum of American Art, New York; Los Angeles County Museum of Art, Los Angeles, Lentos Museum, Linz, Austria; Galerie der Stadt Esslingen, Esslingen, Germany; and Villa Merkel, Esslingen, Germany. Gaines has served as a faculty member at the School of Art at the California Institute of the Arts since 1989. In 2013 he received a John Simon Guggenheim Memorial Foundation Fellowship. The artist currently lives and works in Los Angeles, CA.
www.paulacoopergallery.com