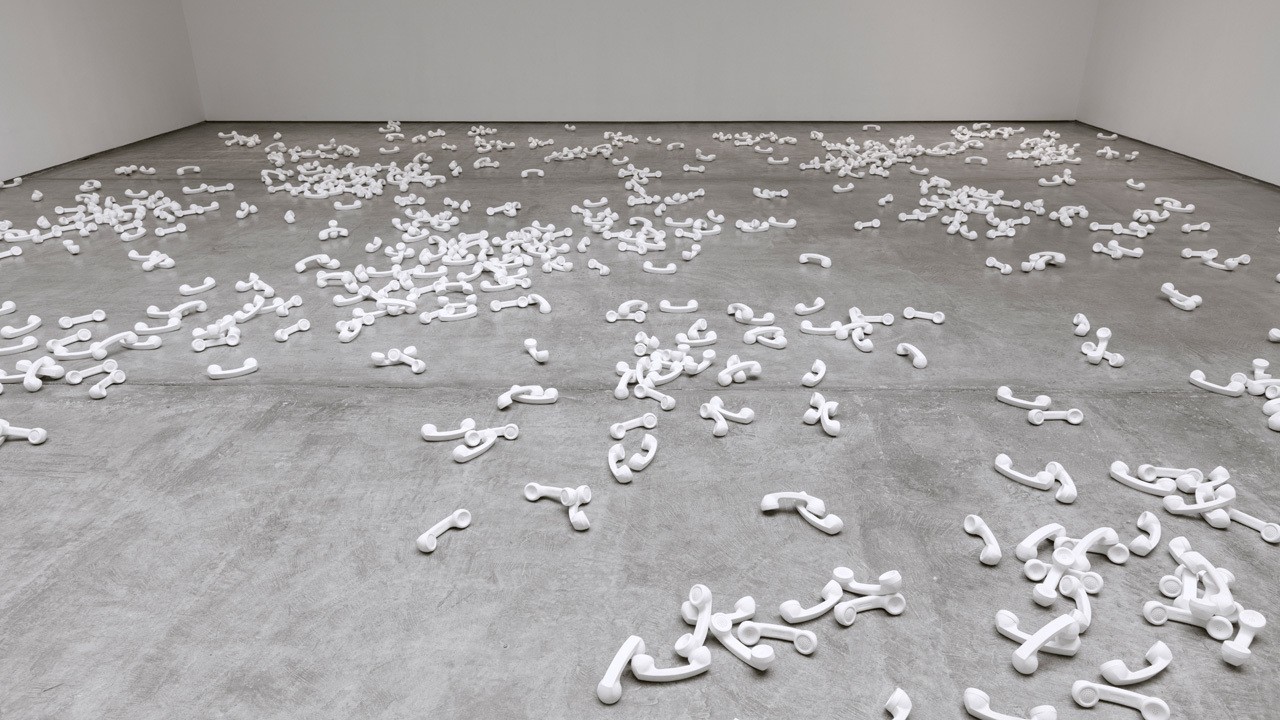 NEW YORK – Paula Cooper Gallery is pleased to present an exhibition of early works by Christian Marclay opening September 7th at 521 West 21st Street. On view are two sculptures and a video created by the artist in the 1990s, as well as a selection of photographs and works on paper, exploring the recurrence of telephonic technologies as visual and acoustic material in Marclay’s work. The exhibition will be on view through October 7th. There will be an opening reception on September 7th from 6 to 8pm.

For more than three decades, Christian Marclay has explored the connections between the visual and the audible, creating works in which these two distinct sensorial experiences enrich and challenge each other. Working across a diverse range of media including sculpture, video, photography, collage, and performance, Marclay deconstructs the ubiquity of sound to extrapolate its perceptual limits and examine the increasing prevalence of sonic mediation through technology such as digital recording, mass reproduction, and telecommunication. His installations often employ appropriated objects that merge or reconfigure auditory and visual elements to challenge our ontological understanding of them.

On view is a selection of Marclay’s works that examine the telephone – a recurring subject in his practice, often appearing as a mute or inadequate object. In the gallery’s main room is Marclay’s large-scale installation entitled Boneyard, created in 1990 and comprised of seven hundred and fifty hydrostone casts of telephone receivers, their white osseous corpus scattered across the floor. Relics of an earlier era, the discarded remains suggest the loss implicit in this mediated form of communication.

On view in the gallery’s second room, Marclay’s work from 1994, Extended Phone II, swirls throughout the space, its massive volume of black plastic tube elongating the length between the receiver and transmitter of a telephone handset. As the work circumvolves into a hypertrophied and ineffective device, the extended phone further complicates the telephonic distinction between sign and referent, speaker and listener.

Telephones (1995) is Marclay’s seven minute video composed of clips taken from classic Hollywood films in which its actors are seen using a telephone. The narrative builds from a sequence of repetitive cuts showing dials, then salutations, and abbreviated conversations, before a series of unresolved or unsettled goodbyes. As the artist noted in a 1997 interview: “Absence is a void to be filled with one’s own stories .... Silence is the negative space that defines sound.” In Telephones, the viewer is left with an obscured narrative that invites reflection on linguistic communication as altered, unstable, or insufficient, and in particular when filtered and abstracted through the telephone.

Christian Marclay (born 1955 in San Rafael, CA) studied at the Ecole Supérieure d’Art Visuel in Geneva from 1977–1980, at the Massachusetts College of Art in Boston from 1977–1980, and as a visiting scholar at Cooper Union in New York in 1978. Marclay’s work has been shown in museums and galleries internationally. He has had important one-person presentations at the Kunsthaus, Zurich (1997), the Museum of Contemporary Art, Chicago (2001), the San Francisco Museum of Modern Art (2002), Whitney Museum of American Art, New York (2010), the Garage Center for Contemporary Culture, Moscow (2011), Aargauer Kunsthaus, Aarau (2015), and Sapporo Art Museum, Sapporo (2017). Marclay received the Golden Lion award for best artist at the 54th Venice Biennale for his 24-hour virtuosic video piece, The Clock, which was first shown at White Cube in London in 2010. Since then, The Clock has been exhibited at a number of institutions worldwide including Paula Cooper Gallery (2011), the Museum of Modern Art, New York (2012), San Francisco Museum of Modern Art (2013), Guggenheim Bilbao (2014), Centre Pompido-Metz (2014), SALT Beyoğlu, Istanbul (2014), Museum Berardo, Lisbon (2015), and at the Contemporary Arts Center, presented by Prospect New Orleans (2016).
www.paulacoopergallery.com