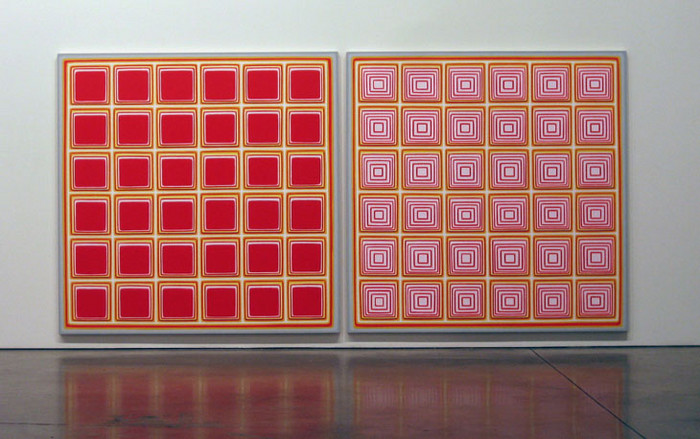 NEW YORK – The Paula Cooper Gallery is pleased to announce an exhibition of new paintings by Dan Walsh, opening February 22 and running through March 29, 2008. This is the artist’s sixth one-person show at the gallery, which has represented him for over fifteen years.

Since the early 1990s, Walsh has approached the precedent-laden field of geometric abstraction with an idiosyncratic methodology based on the repetition of hand-drawn shapes or lines set within a clearly delineated picture plane. His early paintings used a simple vocabulary of squares, lines, and grids: spare yet casual, with an occasional tongue-in-cheek quality, they looked like diagrams, charts or sketches. Progressively integrating color into these pared-down environments, Walsh painted smooth, clearly contoured fields of color on which various shapes were composed: floating squares and rectangles hung from bisecting horizontal lines or huddled together at the corner of the canvas, suggesting weight, volume or movement.

Walsh’s recent work addresses the canvas’s potential as a field of optical experience. Moving away from compositions of geometric forms, the artist’s dynamic color choices and systematic marks are used to energize the surface itself. The intense optical activity is reined in by deliberate repeated forms, creating works that, though pulsating with color, also appear meditative and serene. With these paintings, Walsh invites the viewer to contemplate the effects of color and shape variations in the experience of perception.

Dan Walsh was born in 1960. His work has been exhibited in several national and international venues, including the New Museum of Contemporary Art in New York, P.S.1 Contemporary Art Center in Long Island City, Centre national d’art contemporain in Nice, France, la Synagogue de Delme in Lyon, and CCNOA (Art + Architecture) in Brussels, Belgium. His prints and limited-edition books were the subject of a one-person exhibition at the Cabinet des Estampes du Musée d’Art et d’histoire and MAMCO, in Geneva, Switzerland. He was also included in the Ljubljiana Biennial, Slovenia, and the Lyon Biennial of Contemporary Art, France.

This exhibition coincides with the release of a new monograph of the artist’s work, co-published by Paula Cooper Gallery, New York, and Galerie Xippas, Paris. Copies will be available for purchase at the gallery.
www.paulacoopergallery.com