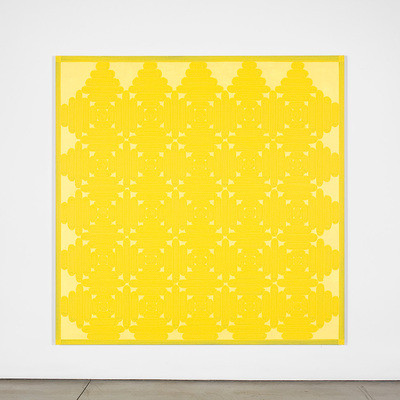 NEW YORK – The Paula Cooper Gallery is pleased to present an exhibition of new work by Dan Walsh on view from March 17 through April 21, 2012 at 534 West 21st Street.

Walsh will show paintings and works on paper in which he continues to explore “process generated images,” the artist’s method of creating images shaped by the process of their own making. Proposing a dialogue between the systematic and the open-ended, Walsh employs a defined set of rules, used to progress toward complex surfaces that activate the visual field. He layers deliberate strokes of paint, the logic of each informing and infiltrating the next. Walsh describes this as an additive methodology in which the result is unexpected: a build-up of marks and bursts of color constituting more than the sum of its parts.

His works, which The New York Times has described as “perceptually riveting,” playfully examine the very act of seeing. Interactions of unmodulated color produce grids and patterns that emerge and recede on the picture surface. The images shift between moments of recognition and fresh sensory material, engaging the process by which the visual system articulates information. The show also includes a series of rubbed gold drawings that constitute a meditation on geometric forms and evoke architectural diagrams or topographical maps.

In June 2012 the Rhode Island School of Design Museum will present a one-person exhibition of Walsh’s paintings. Several of his prints and hand-made books are currently included in the Museum of Modern Art’s group exhibition, Print/Out.

Walsh’s work has also been shown at P.S.1 Contemporary Art Center in Long Island City, the New Museum of Contemporary Art in New York, the Centre national d’art contemporain in Nice, la Synagogue de Delme, France, CCNOA (Art + Architecture) in Brussels, Belgium and the Kunstverein Medienturm, Graz. His prints and limited-edition books were the subject of a one-person exhibition at the Cabinet des Estampes du Musée d’Art et d’histoire, in Geneva, Switzerland. He was also included in the Ljubljiana Biennial, Slovenia, and the Lyon Biennial of Contemporary Art, France.
www.paulacoopergallery.com