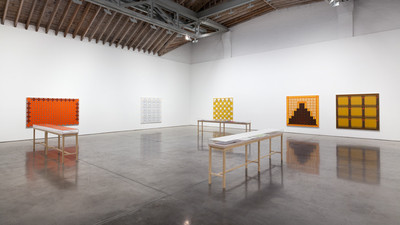 NEW YORK -- The Paula Cooper Gallery is pleased to present a selection of works (1994-2014) by Dan Walsh. The exhibition will include paintings, works on paper, books, and mixed media, shedding light on Walsh’s artistic evolution throughout the last twenty years. Opening reception, January 15, 6 – 8PM.

Since the 1990s, Walsh has traced a particular trajectory in painting, working from a pared-down repertoire of elemental forms – lines, grids, squares and rectangles – which he continuously reorganizes within the visual field.

The paintings on view range from his earlier black-and-white tableaux to his more recent chromatic Cycle series, in which Walsh translates specific referents into his own visual language. His paintings and works on paper explore “process generated images,” a method of creating images shaped by the process of their own making. Proposing a dialogue between the systematic and the open-ended, Walsh employs a defined set of rules, which are used to progress toward complex surfaces that then activate the visual field. The artist layers strokes of paint, the logic of each informing and infiltrating the next. He describes this as an additive methodology in which the result is unexpected: a build-up of marks and bursts of color constituting more than the sum of its parts.

In the past 15 years, a large part of the artist’s activity has also revolved around artist books, which he often develops as a sequential format in which to break apart and re-assemble his own pictorial practice. Methodically repeated shapes, varying within a controlled set of parameters, allow the reader to delve into Walsh’s art in near-narrative form.

Born in Philadelphia, Walsh lives and works in New York City. His work is included in public collections around the world, including the Fonds National d’Art Contemporain, Paris, the Museum of Modern Art, New York, the Art Institute of Chicago, and the Victoria and Albert Museum, London. It has been exhibited at P.S.1 Contemporary Art Center in Long Island City, the New Museum, New York, the Centre National d’Art Contemporain in Nice, the Speerstra Foundation in Lausanne, the Rhode Island School of Design Museum of Art in Providence, and the Kunstverein Medienturm, Graz. His prints and limited-edition books were the subject of a one-person exhibition at the Cabinet des Estampes in Geneva, Switzerland. He was also included in the Ljubljiana Biennial, Slovenia, and the Lyon Biennial of Contemporary Art, France (both 2003), and the recent Whitney Biennial, Spring 2014.
www.paulacoopergallery.com