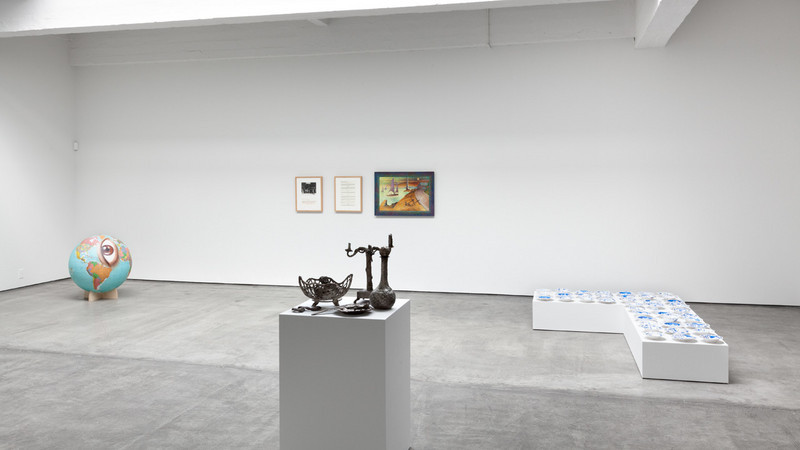 The title “Dissolving Margins” is taken from Elena Ferrante’s 2012 novel, My Brilliant Friend, and describes the character Lila’s recurring existential episodes. During these distressed perceptual states, Lila has “the impression that something absolutely material, which had been present around her and around everyone and everything forever, but imperceptible, was breaking down the outlines of persons and things and revealing itself” (p.89-90). The works included in the show are bound by this disruptive experience; each confronts preconceived ideas and normative modes. They deceive and beset, or playfully satirize—in sum they form an unsettling conspiracy.

Drawing from commodification and mass production, many of these works reconstitute objects, ubiquitous to contemporary culture, in incongruent yet familiar materials. For his work, Circle in circle, Kelley Walker replaces a disco ball’s mirrored facets with molded chocolate. Its organic surface degrades with age, producing a muted chalky bloom, rather than the eternal glitter of reflected light. The object’s unexpected and cheeky materiality exploits inherent codes to reveal the propaganda of commercial goods—a practice which Claes Oldenburg and Coosje van Bruggen pioneered in their mixed media works of art. Drawn in pastel, the duo’s anthropomorphized shuttlecock performs a feat of superhuman acrobatics. The absurdist scene irreverently animates the inanimate object, as do the reconfigured stools in Christian Marclay’s Wind Section Series.

Employing misattribution and duplicitous historiography, other works contest the inviolability of authorship. Emily Feather’s intricate inkblots harbor her enigmatic relationship as an apprentice to Bruce Conner, while Douglas Huebler’s work includes a subversive reproduction of a historical masterpiece. Narrative boundaries dissolve further in the art of Suha Traboulsi, a Palestinian artist who greatly influenced Walid Raad. These vibrantly colored works, full of restrained geometry and austere lines, eerily foreshadow the visual trends of the 1960s. Beyond any other successor, Walid Raad draws on Traboulsi’s prophetic style. They comparably manipulate ink and paper to flatten and compress the picture plane, forming a continuous aesthetic dialogue.

The recent works by Liz Glynn and Sam Durant find their inspiration in literature. Glynn’s bronze patinaed still-life pays homage to Honoré de Balzac’s The Red Inn, whose infamous precept looms throughout her artistic practice: “behind every great fortune lies a great crime.” Durant titles his work with the concluding line of Caribbean Surrealist Suzanne Césaire’s 1945 essay, The Great Camouflage. Jonathan Borofsky’s Giraffe/Escalator Video Animation Installation illustrates a merging of minimal and organic imagery. Finally a selection of four photographs by Robert Grosvenor round out the exhibition, exemplifying this artist’s idiosyncratic look at place and sculptural form.
www.paulacoopergallery.com