In the Viewing Room 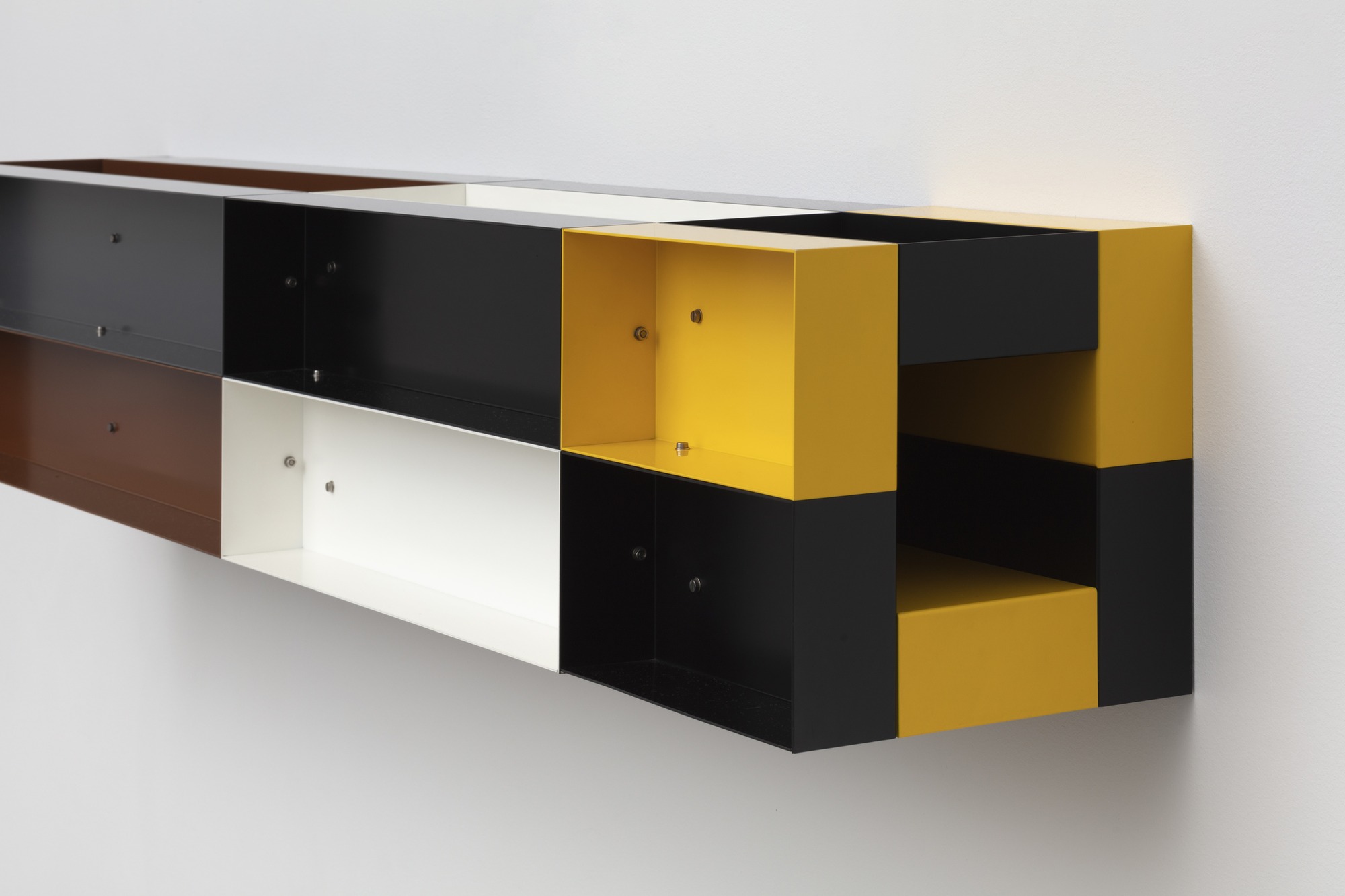 The 1975 catalogue raisonné of Donald Judd’s painting, sculpture, and woodblocks leads with an untitled painting in oil on canvas. [1] This was not the first painting executed by Judd; rather, it was the work he chose to signal the beginning of his career as an artist in 1960. In this painting, a network of gently curving white lines intersect above an uneven ground of textural layers of blue and black. The paint has been applied and scraped away to create depth, increasing its tactility and hinting at the work in three dimensions that was to come.

Despite participating in the anti-painting polemic of the 1960s and largely abandoning the medium in subsequent years, Judd accorded his paintings a new significance when reflecting on his production at large in the late 1980s. [2] This was manifest in his decision to permanently install his early paintings throughout the Judd Foundation in Marfa, and in the revisiting of important early works.

In 1989 Judd executed the cadmium-red sand painting on display here, after a similar work conceived in 1962. The use of sand to enhance the texture of the surface, the four-inch depth, and the insertion of a glass disk in the center all serve to distance the work from the illusionism and two-dimensionality of painting. It is an example of what the artist would term the specific object—an artwork that was neither painting nor sculpture, but something in between. There are four cadmium-red sand paintings with a found object in the center: one from 1962 that contains a piece of copper, and three from 1989 that each house a purple glass disk. Both the 1962 example and one from 1989 are permanently installed in Marfa, demonstrating the significance these works held for the artist.

Printmaking was central to Judd’s practice, and the examples illustrated here display an evolution in the artist’s use of the medium, which he considered a hybrid of painting and sculpture. The earliest woodcut, dated 1955-56, was printed by Judd from a block he carved himself before his father, Roy, began carving the blocks and making up the prints. The first woodcut they produced together in 1961––known as the “paperclip”­­––was also the first to include straight lines, a technical challenge that the younger Judd would have struggled to produce alone. [3] The “paperclip” was immediately followed by series of rectangles and parallelograms, in which a colored field is divided by configurations of straight lines cut in negative space.

Judd would work with many printers to produce these last woodcuts over the years. The parallelograms presented here––in a cerulean blue, and a more unusual manganese blue––were printed by Roy Judd, and are signed by Donald Judd.

The significance of the printmaking process for Judd is manifest in his transformation of the woodblock itself into a sculptural relief. There are 27 different configurations of woodblocks, and each configuration exists in both the left and right facing variants (meaning that its highest corner “points” to the left or right), and was produced in both unpainted sugar pine and cadmium red. No combination of color and form was produced twice, and every woodblock is unique. The red woodblock presented here was fabricated by Jim Cooper and Gary Williams in 1978, and is signed by the artist. The unpainted woodblock is also signed, and was fabricated by Jim Cooper and Ichiro Kato in 1981.

Similarly based on an orderly, logical sequence of forms, the progressions were a series Judd began in the early 1960s and would return to throughout his career. The progression on display here is based on the Fibonacci sequence, with the volume of the negative space between the brass boxes equaling the sum of the two that precede it. Executed in red aluminum and polished brass, this progression characterizes the artist’s keen eye for color and materiality.

Judd’s exceptionally bold use of color in sculpture is most apparent in the enameled aluminum wall works he produced with Swiss metalworkers. Beginning with Lehni AG, a furniture manufacturer he met in Zurich in 1983, Judd used Swiss fabrication methods to make modular sculptures in a wide range of hues through a system of additive construction. [4] The untitled aluminum wall piece presented here is an example produced during the first formative year that Judd worked with Lehni, before relocating the fabrication of his multicolored works to other manufacturers.

Judd’s plywood wall works invite close examination from all angles and are intentionally installed at eye-level so their volume and depth can be best perceived. The two units comprising the 1989 example have identical exterior dimensions that are transformed by the internal planes, alternatively positioned to allow varying degrees of access to both the material and the space it occupies. In the single unit of 1992 the multitude of planes and edges form windows through which to view the red and blue acrylic sheets behind. Form, volume and material focus the attention, designating color as the main attraction.