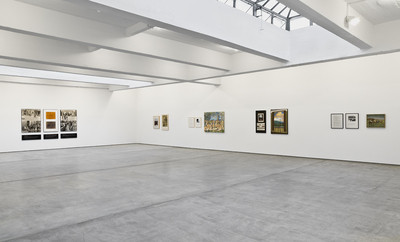 NEW YORK – The Paula Cooper Gallery is pleased to announce representation of the Estate of Douglas Huebler (1924-1997). The first exhibition of works to be presented, Crocodile Tears, will open on Saturday 3 March.

Huebler’s interests and influences ranged from language and mathematics to avant-garde literature and Existentialism. He paired text and image, wryly deconstructing the ways we derive meaning from visual information, and his fascination with issues of replication, originality and commodity fetishism influenced an entire generation of younger artists.

The works comprised in Crocodile Tears derive from a screenplay written between 1979 and 1981. The screenplay tells the story of fictional performance artist Jason James and brings together a number of issues as current then as today, such as the emergence of digital art, the strengthening of a profit-driven art market, artists’ resistance to commodification, the merging of art and entertainment, and more.

Viewed by Huebler as an outgrowth of his Variable Piece #70 (1971) – a project to “photographically document the existence of everyone alive” – the screenplay also inspired a series of works: story boards (1981-1984); a conceptual comic strip, which appeared in installments in the L.A. Weekly (1984); and wall works (1985 through the mid-nineties) consisting of paintings, text and photographs. As in previous works, Huebler invites us to shift back and forth between various types of information (text, painted image, photographic image), freely combining “fine” art and popular culture.

Huebler’s first one-person museum exhibition was at the Phillips Gallery, Detroit, in 1953. Thereafter, he exhibited extensively in galleries and museums in the United States and Europe, as well as in international exhibitions such as Documenta V (1972), and was included in many historical surveys of conceptual art. The last retrospective of his work during his lifetime was presented at the Palais des Beaux-Arts in Brussels in 1994. There have been several posthumous one-person exhibitions, including at the Camden Arts Centre, London (2002) and the MAMCO, Geneva (2006). In 2004, Huebler’s work was included in the exhibition, A Minimal Future? Art as Object 1958-1968, at the Museum of Contemporary Art, Los Angeles.
www.paulacoopergallery.com