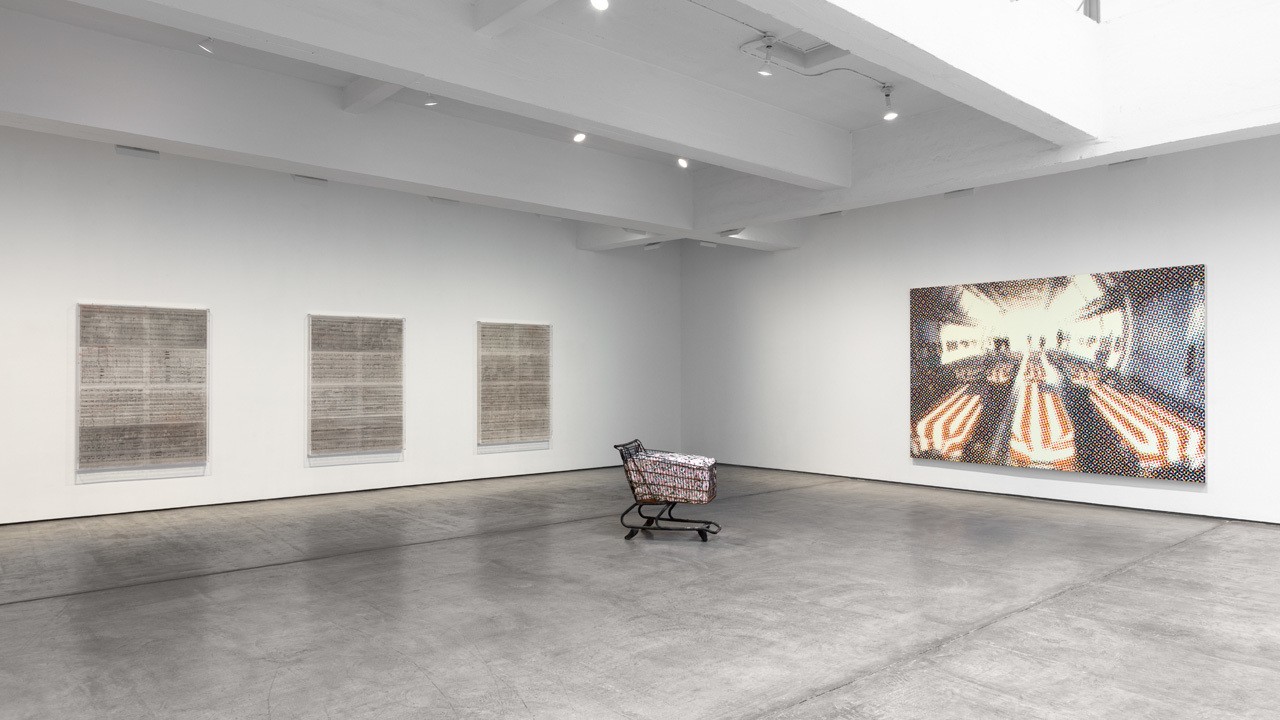 NEW YORK – Paula Cooper Gallery is pleased to present a group show of work by Sophie Calle, Sam Durant, Hans Haacke, Charles Gaines, Wayne Gonzales, Zoe Leonard, Peter Moore, Andres Serrano, and Carey Young. Employing a variety of strategies from indirect critique to straightforward dissent, the nine artists in this exhibition explore themes of political discourse. The exhibition will be on view at 521 West 21st Street from June 2 through June 30, 2017.

Nationalism as a constructed, exclusionary and potentially harmful narrative is examined in the works of Hans Haacke and Charles Gaines. Haacke’s Collateral (1991) presents a derelict shopping cart filled with lustrous silk-screened buttons emblazoned with an American flag or a zealous call to arms. Suggesting a commodification of patriotism and branding of American identity, the work’s incongruity rejects the notion of nationalism as benevolent or implicit. Gaines’s work explores similar indictments by merging media from disparate eras: a 1967 speech by Stokely Carmichael with sheet music from a 1904 Spanish opera; and text from a 1951 manifesto by Hannah Arendt with an 1862 Civil War song. Gaines’ contrasting sources underscore the prejudicial perils of contrived patriotism.

Other works examine the boundaries of repression versus freedom, and censorship versus civil liberties. Sophie Calle’s images from motion-activated cameras capture the migration of animals on special bridges and tunnels built to allow their movement across highways. The video stills suggest an omnipresent surveillance in the face of ostensible autonomy that is ambiguous yet disconcerting. Also mining the collision of freedom and confinement, Carey Young’s Black Square (Cell) (2016) depicts the small hatch window of a prison door, permitting a narrow view into the shadowy dark interior of a prison cell. Evoking the narrative of those inmates imprisoned in its space, the work reflects on restraint versus punishment, rehabilitation versus retribution.

Both Andres Serrano and Wayne Gonzales blur the divisions of artistic medium to deconstruct iconographic imagery and their associations with political power. Photographed in sharp theatrical lighting, Serrano’s portrait of a Ku Klux Klan member casts its inflammatory subject into dramatic chiaroscuro. Printed in large-format with a hyper-resolution, the work distorts the individual, blurring the lines of photography, painting and sculpture as a means to consider the figure’s abhorrent cultural history. Conversely, Wayne Gonzales’s painting of the White House, a symbol inspiring allegiance and honor, is reduced to a dot-matrix system of white marks on a painted canvas. Constructed in layers modeled on the four-color process and reconceived as monochromes, the image’s coarse resolution restricts clarity for its viewers, serving as a metaphor for the individual’s precarious access to truth in relation to authority.

As a direct representation of political dissidence, the work of Sam Durant privileges language appropriated from historical events of protest and revolt. Written in spray enamel on aluminum panel, Dark Institutions (2009) transcribes a text originally printed on a leaflet and left at the site of political bombings by a small group of militant anarchists in the U.S. in 1919. Amplified in scale and material, the sentiment is recast as prescient words for the present day. The photographs by Peter Moore similarly present protest and rebellious action as a critical tool for empowerment and change. Depicting the 1964 March for Freedom of Expression in New York, Moore captures its participants including familiar artists such as Allen Ginsberg, Peter Orlovsky and Taylor Mead.
www.paulacoopergallery.com