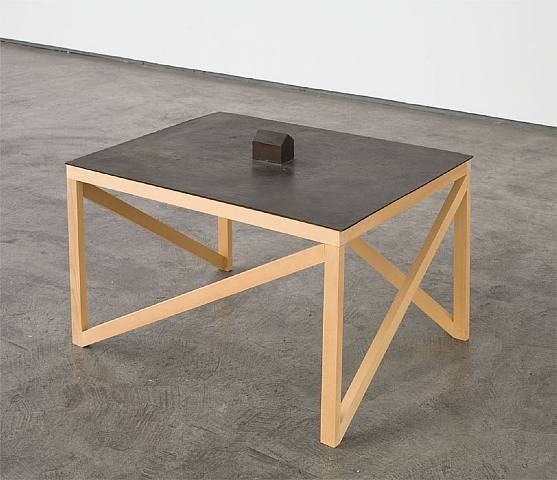 NEW YORK -- The Paula Cooper Gallery is pleased to announce an exhibition of early works by Joel Shapiro. The exhibition will be on view at 521 West 21st Street from January 8 through February 13 and will include a selection of sculpture from 1969 through 1979.
Joel Shapiro began working in the late 1960s at a time when traditional notions of sculpture were being radically redefined by Minimalism and Conceptual Art. Shapiro’s first one-person shows, at the Paula Cooper Gallery in 1970 and 1972 and at the Clocktower in 1972, included small, simplified wood or bronze sculptures of everyday objects such as shelves, ladders, houses, chairs and coffins. Despite their intimate scale, they have a powerful presence and challenge expectations of a sculpture’s size in relation to the human body. With their familiar references and untroubled embrace of metaphorical content, Shapiro’s sculptures reintroduced the human figure and movement in a fiercely anti-referential sculptural field. Shapiro has called these works “a physical manifestation of thought in material and form.”

Joel Shapiro was born in New York City in 1941, and received B.A. and M.A. degrees from New York University. Since his first exhibition in 1970, Shapiro’s work has been the subject of countless one-person shows and retrospectives, most notably at the Whitechapel Art Gallery (1980), the Whitney Museum (1982), the Stedelijk Museum, Amsterdam (1985), the Walker Art Center, Minneapolis (1995-6, jointly with the Nelson-Atkins Museum, Kansas City) and most recently at the Iris and B. Gerald Cantor Roof Garden, Metropolitan Museum of Art (2001). Sculptures by Shapiro can be found in numerous public collections in the United States and internationally, including the Museum of Modern Art, the Whitney Museum and the Metropolitan Museum of Art in New York alone. He was commissioned to do projects for the United States Holocaust Memorial Museum in Washington D.C.