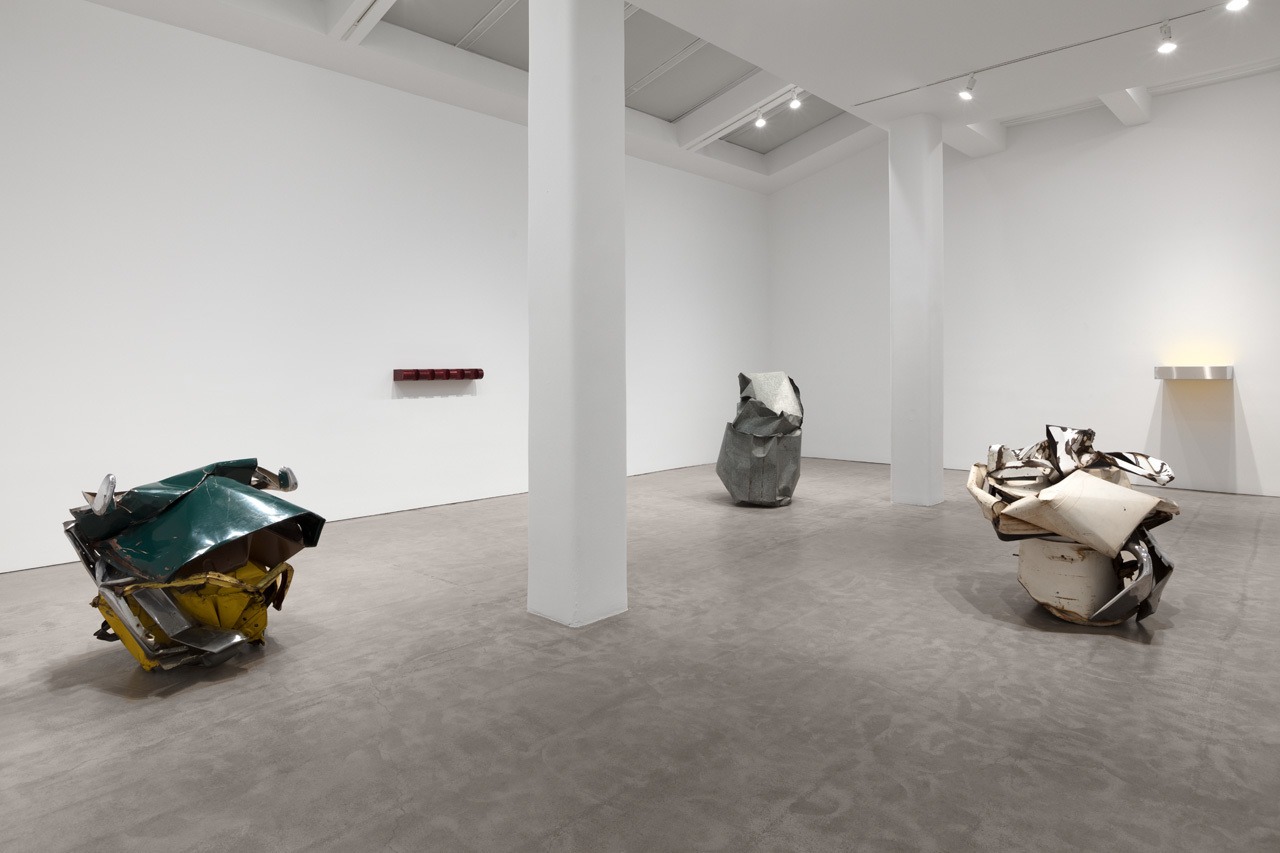 NEW YORK — A two-person exhibition of work by John Chamberlain and Donald Judd, organized by Jim Jacobs and Paula Cooper Gallery, will open on November 2, 2019. The show will examine the artists’ parallel experimentation with material, form and color during the 1960s and 70s, as shaped by their artistic exchange and personal friendship. An accompanying illustrated exhibition catalogue will feature essays by Jim Jacobs (art dealer and former assistant to John Chamberlain), Ellie Meyer (Catalogue Raisonné Research Manager, Judd Foundation), and Mark Rosenthal (Curator and Art Historian). The show will be on view through December 14 at 524 West 26th Street.

As landmark figures of postwar American art, John Chamberlain and Donald Judd were contemporaries and friends within the New York art world beginning in the 1960s. Judd was an ardent supporter of Chamberlain’s art as seen in his critical writing in Arts Magazine (March 1962), Art International (December 1963), and Art in America (August 1964), among many others. The exhibition at Paula Cooper Gallery highlights the two artists’ work during this early period as they traded information about methods and materials. Both experimented with galvanized metal—Judd even supplied Chamberlain with his unused galvanized iron boxes, which Chamberlain then crushed for a series of work that includes Ultra Yahoo, 1967, and Untitled, 1967—both on view.1 “The voluminousness” Judd wrote, “is salient in Chamberlain’s work ... The seeming superfluity, openness and capacity for expansion and change of the involuted metal—this is a primary quality.” Volume and “involution” recur as core issues in Judd’s own investigation of space. His 1964 bullnose progression, composed of galvanized iron and red enamel over wood, comparatively activates negative space and the surrounding environment. Though structurally very different from Chamberlain’s forms, Judd’s work, in its rigorous geometry, addresses capacity and spatial expansiveness in a distinct yet complementary way.

Both artists were pioneers in their use of industrial paint and color. Judd’s occasional use of motorcycle lacquers such as Harley-Davidson Hi Fi Blue and metal flake car paints, like Kandy Apple Red, originated through his communication and familiarity with Chamberlain.2 In paintings from 1963 to 1965, Chamberlain experimented with the translucent property of automobile lacquer. In works such as Orlons, 1964, Chamberlain sprayed multiple layers of metal-flake lacquer onto a square-foot sheet, creating new color through layering. In two untitled wall works by Judd dated 1967, the artist similarly employs the translucent potential of lacquer to generate depth beyond the flat planar surface. In Judd’s works, thin layers of paint render visible the fractal patterns of the galvanized method from which they are made.

John Chamberlain (born in 1927 in Rochester, IN; died in 2011 in New York City) studied at the Art Institute of Chicago and the renowned Black Mountain College. The recipient of numerous awards, Chamberlain was honored with two Guggenheim Fellowships (1966, 1977), the Skowhegan Medal for Sculpture and a Lifetime Achievement Award from the International Sculpture Center in Washington DC (both in 1993), The National Arts Club Award in New York (1997), and the Guild Hall Academy of the Fine Arts, Visual Arts Honoree for the 22nd Annual Lifetime Achievement Award (2007). Chamberlain’s work has been included in numerous international and museum exhibitions, including the 1964 Venice Biennale and in retrospectives at the Museum of Contemporary Art, Los Angeles (1986), and twice at the Solomon R. Guggenheim Museum (1971, 2012). Chamberlain is in many public collections including the Whitney Museum of American Art; the Menil Collection, Houston; the Kunstmuseum Winterthur, Switzerland; and Centre Pompidou, Paris. His sculptures are part of permanent exhibitions at the Chinati Foundation in Marfa, TX, and at Dia:Beacon in upstate New York.

Before he transitioned to work in three dimensions, Donald Judd (born in 1928 in Excelsior Springs, MO; died in 1994 in New York City) began as a painter and an art critic, having studied philosophy and art history at Columbia University and painting at the Art Students League. In 1977, Judd established the ideas for the Judd Foundation and in 1986 he founded the Chinati Foundation/La Fundación Chinati. For almost four decades, Judd exhibited extensively throughout the United States, Europe, and Asia with his work in museum collections worldwide including Kunstmuseum Basel, Leeum, Samsung Museum of Art, Seoul, The Metropolitan Museum of Art, New York, Museum Boijmans Van Beuningen, Rotterdam, National Gallery of Art, Washington, DC, Tate Gallery, London, and Tokyo Metropolitan Art Museum, among many others. Major exhibitions of his work include the Whitney Museum of American Art, New York (1968, 1988); the National Gallery of Canada, Ottawa (1975); Stedelijk Van Abbemuseum, Eindhoven (1970, 1987–88); and Tate Modern, London (2004). The Museum of Modern Art, New York will present a major retrospective of his work March 1 to July 11, 2020.