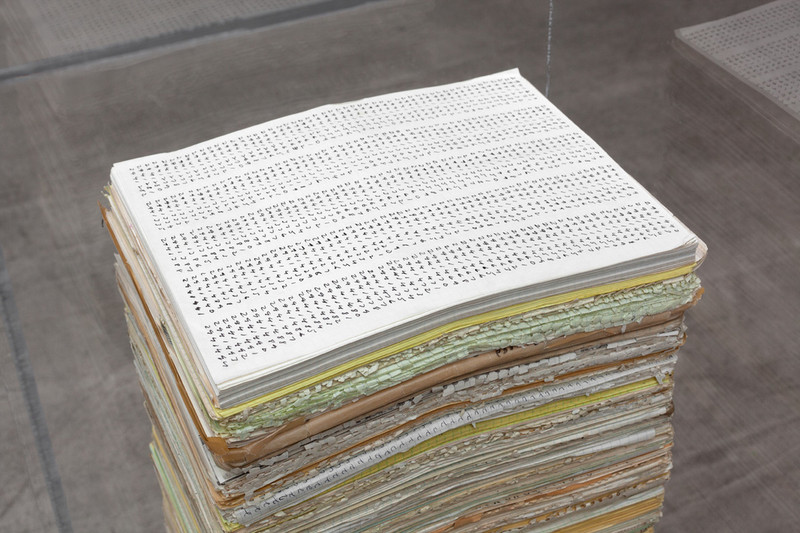 NEW YORK—The Paula Cooper Gallery is pleased to present an exhibition of early work by Jonathan Borofsky, with painting and sculpture from 1966–1984.

Borofsky came to prominence in the New York art world of the mid-1970s, “hitting the stagnant art scene [...] like a blast of crazy, fresh air.”1 In a period dominated by the detached ethos of Minimalism and Conceptualism, and Pop Art imagery, the artist developed a highly personal style that emphasized the emotive and fantastical recesses of human consciousness. Among his earliest works are sculptures inspired by his childhood summers in Camp Alton, New Hampshire. These eccentric, mock-devotional objects, one of which is included in the show, frame camp snapshots with cut chipboard and splatter paint.

Over the course of the next two decades, the artist continued to create art that was broadly autobiographical and narrative but linked to the archetypal and universal. For his first one-person show in 1975 at Paula Cooper Gallery, Borofsky introduced his serial project, Counting, a stack of paper 34-inches high that counted from 1 to 2,346,502. Paintings and drawings rendered in spare, childlike style and scrawled on notebook paper or canvas, displayed imagery inspired by the artist’s dreams. Loose and spontaneous, these works offered direct access to the artist’s subconscious. In Dream #1 (Supermarket) at 1,944,821, for instance, the artist narrates in neat cursive his dream of walking with his mother which devolves into a stickup. Instead of signing each work, he inscribed his paintings and drawings with the number he had counted to each day.

In 1977, Borofsky was invited to participate in the Venice Biennale. By then he had moved to Los Angeles to teach at CalArts, where he was an influential teacher of students Jim Shaw, Mike Kelley, and Tony Oursler. He was included in a number of other European exhibitions in the late 1970s and early 1980s at Galerie Rudolf Zwirner and at “Westkunst” in Cologne, “Documenta” in Kassel, and “Zeitgeist” in Berlin, where the artist painted his iconic Running Man on the Berlin Wall. In 1984, the Philadelphia Museum of Art and the Whitney Museum of American Art organized a retrospective of his work, which travelled to Berkeley’s University Art Gallery, the Walker Art Center, and the Corcoran Gallery of Art. In the last few decades, Borofsky has focused on making art in public places, including large scale site-specific installations and monumental sculptures such as the 100-foot tall Molecule Man standing on the Spree River in Berlin, the Humanity in Motion installation in the 140-foot tall atrium entranceway of the Comcast Center in Philadelphia, and the 64-foot tall People Tower created for the 2008 Beijing Olympics.