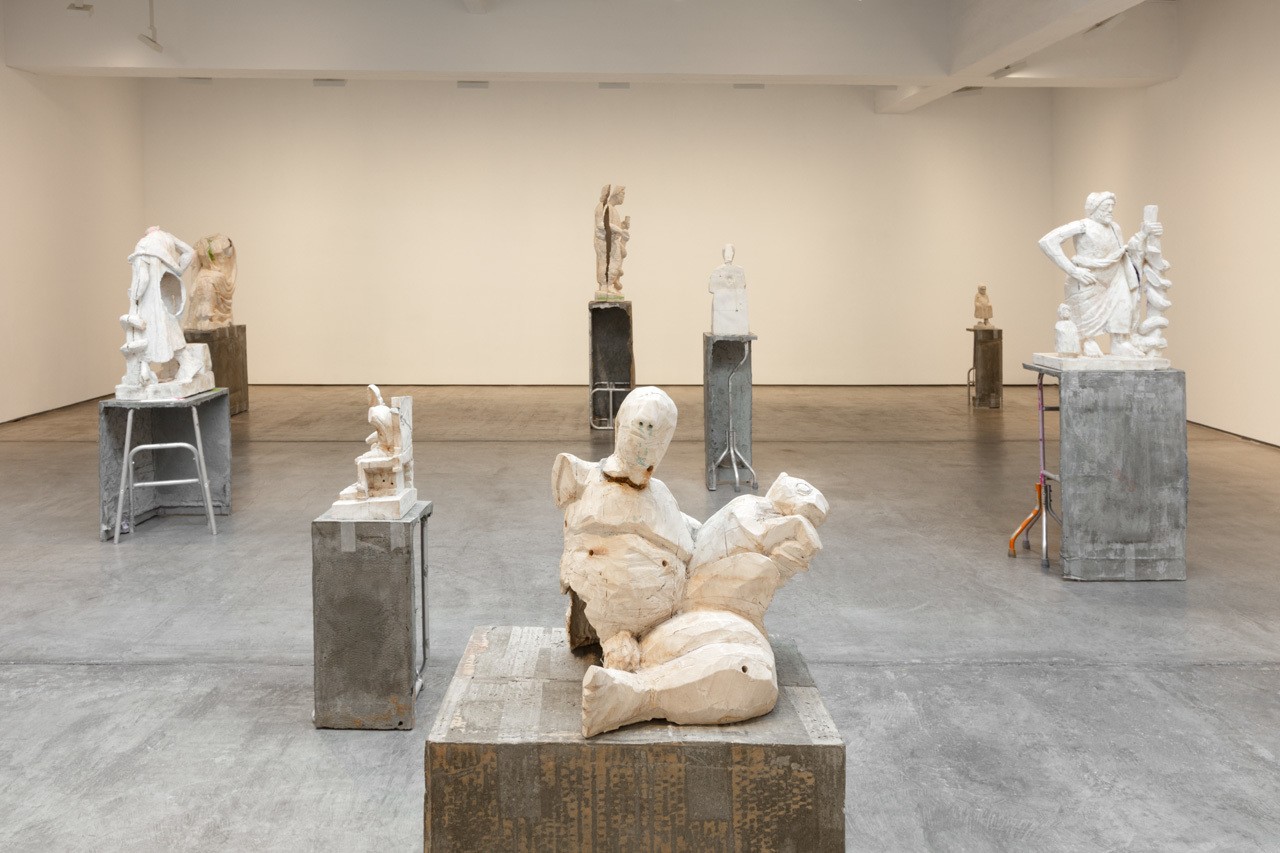 NEW YORK – Paula Cooper Gallery is pleased to present an exhibition of recent sculpture by Justin Matherly. The show, entitled A recrudescence, will be on view at 521 West 21st Street from April 22 through May 26, 2017. There will be an opening reception from 6 to 8pm on Saturday, April 22nd.

Ranging from three and a half to seven feet in height, Matherly’s sculptures take inspiration from works of classical antiquity that portray Asclepius, the ancient god of medicine, his son, Telesphoros, the symbol of recovery, and his daughter, Hygeia, the goddess of health. Excluding the figure of Hygeia, the works were remade from the broken and torn molds used for Matherly’s 2016 exhibition at Galerie Eva Presenhuber, the quiescence of the inorganic world. In essence the works are brought back from the dead, reactivated and revived. Cast in modified gypsum plaster, a contemporary material associated with orthopedic dressing, the figures offer a modern reinterpretation of their ancient antecedents that were made of fine grain gypsum or marble. Archaic features, roughly scored surfaces, fissured seams and smeared paint contrast with the adamantine idealized forms of classical antiquity. Suggesting a combination of degradation and persistence, Matherly’s bases integrate ambulatory walkers and concrete casts of the cardboard boxes in which they were shipped. Impressions of tape and packaging labels that appear on the stands serve to cement the sculptures within a humble schematic realism. These are not the impervious figures of antiquity defined by Platonian beauty and mathematic perfection, but rather modern derivatives, both fallible and resolute.

Representing the healing aspect of the medicinal arts, Asclepius carries a snake entwined staff, the enduring symbol of medicine today. His children appear as they do historically: Telesphorus, as a dwarf wearing a hooded cloak, and Hygeia, wrapped in classical drapery. The body of work builds from the conceptual basis of Matherly’s forthcoming installation for Skulptur Projekte Münster 2017: Friedrich Nietzsche’s thought of Eternal Recurrence. Nietzsche writes:

“This life as you now live it and have lived it, you will have to live once more and innumerable times more; and there will be nothing new in it, but every pain and every joy and every thought and sigh and everything unutterably small or great in your life will have to return to you, all in the same succession and sequence ... The eternal hourglass of existence is turned upside down again and again, and you with it, speck of dust!” 1

For Nietzsche, the burden of this concept was “horrifying and paralyzing,” yet he believed that to comprehend and embrace it would require a love of fate, the highest form of affirmation that can be attained. For Matherly, the figures of Asclepius, Telesphoros and Hygeia symbolize this movement from depression to affirmation, from injury to recovery, from stasis to healthful activity and interminably back to stasis. Their fragile corporeality prompts a meditation on existence and perseverance.

Justin Matherly (b. 1972) received his BFA from the University of Pennsylvania and his MFA from Hunter College. His work has been included in Kunstler und Dichter (Artists and Poets) at the Vienna Secession (2015), A Triple Tour: Works from the Pinault Collection at La Conciergerie, Paris (2014), the Public Art Fund’s 2012 show Common Ground at City Hall Park, and the Sculpture Center’s In Practice Projects in 2010. Matherly will participate in the 2017 Skulptur Projekte Münster, Germany. The artist currently lives and works in New York.

Friedrich Nietzsche, The Gay Science: With a Prelude in Rhymes and an Appendix of Songs, trans. Walter Kaufmann (New York: Random House, 1974). ↩
www.paulacoopergallery.com