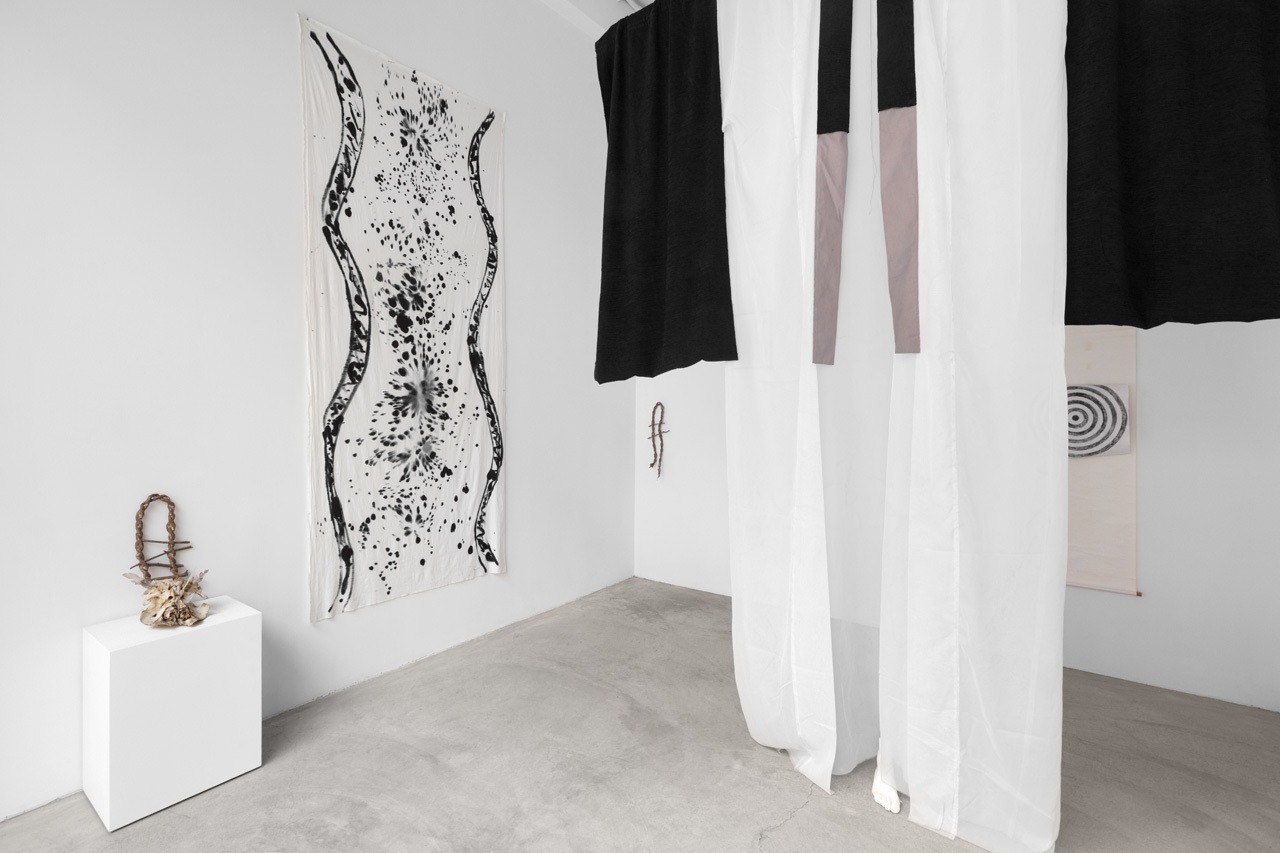 NEW YORK—Paula Cooper Gallery is pleased to present an exhibition of recent works by Kazuko Miyamoto in the gallery’s vitrine space at 529 West 21st Street, opening October 6, 2018. A feminist figure of minimalism, Miyamoto has long created work that introduced handmade, irregular, and intimate elements to both advance and critique the movement’s visual language.1

On view in the installation is a selection of artworks of wide-ranging scale and medium including drawing, painting, sculpture, photography, and assemblage. The central work is an oversized semitransparent kimono in black and white fabric. Suspended from the ceiling, its phantasmal form oscillates with slight atmospheric changes, surveying the vitrine contents as well as sidewalk passersby. Discretely placed around it, in corners, and against the walls, are objects of intimate or self-referential scale: an animal skull with a crop of protruding feathers; cast plaster feet; aluminum cans, painted white or black; lengths of entwined rope transected by wood twigs; and a pallet of contrasting bands. A mounted scroll painting hangs on the posterior wall, just visible through the kimono’s sheer fabric. Also mounted is a drawing of sumi ink on cotton by David Fenn, titled Movement in Black and White (2013). The convergence of literal, allusive and geometric elements suspends the room between formalism and metaphor, sensitivity and spaciousness, as a kind of surreal vanitas stage.

Born in Tokyo in 1942, Miyamoto enrolled at Gendai Bijutsu Kenkyujo in Tokyo (Contemporary Art Research Studio) before moving to New York in 1964 to study at the Arts Student League (1964-68). She has participated in important exhibitions both within the US and abroad including “Fiber Workers: North and South Americas and Japan,” The National Museum of Modern Art, Kyoto and Tokyo, Japan (1977); Neue Galerie Linz, Austria (1988); “Open Mind,” Wadsworth Antheneum, Hartford, CT (1991); Kunstverein Firma Paradigma, Linz, Austria (1996); “Black & White,” Lentos Museum, Linz, Austria (2007); Kunsthalle Krems, Krems, Austria (2008); and the Fukuyama Arts Festival, Japan (2013). In 1982 the artist presented a public installation in Bryant Park as an Artist in Residence with the Public Art Fund, New York. In 1972, Miyamoto was among the first wave of women artists to join A.I.R. (Artist in Residence), the first all-female artist collective in New York. In 1986, she established Gallery onetwentyeight, a community art space that is the longest continuing space of its kind in the Lower East Side. Miyamoto’s work is in the collection of the Museum of Modern Art, New York, NY; Daimler Contemporary, Berlin, Germany; the Princeton University Art Museum, NJ; The National Museum of Modern Art, Kyoto, Japan; and the LeWitt Collection, Chester, CT. Miyamoto has been the recipient of the Federico II Premio Internazionale di Pittura, Italy, in 2003, the Francis J. Greenburger Foundation Award in 2003, and the National Endowment for the Arts, CAPS in 1979 & 1980. The artist currently lives and works in New York and is represented by Exile Gallery, Berlin.