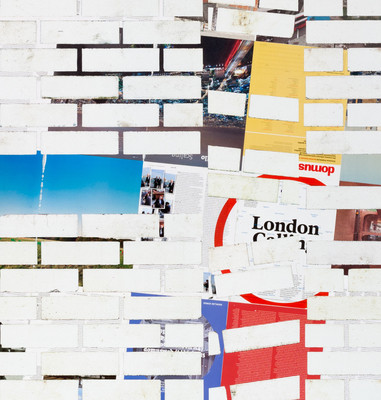 NEW YORK—The Paula Cooper Gallery is pleased to present a series of twelve recent brick paintings by Kelley Walker. This will be Walker’s fifth one-person exhibition at Paula Cooper Gallery. There will be an opening reception on March 13, from 6 – 8 pm.

Created between 2013-14, Walker’s large canvases of powdery silkscreened bricks are lined and separated with fragments of pages from the Italian architecture and design magazine Domus. The artist began making his brick paintings in 2005, first entirely in silkscreen and later adding collaged printed material. Walker begins by scanning individual bricks, which he then arranges into a stacked alignment and silkscreens using a four-color process. According to the artist, “I print the silkscreens on canvas with uneven, uncalibrated hand pressure. This results in a mostly off-color photographic image, with infinite unseen variations” (Kelley Walker, Kelley Walker, exh. cat., Centre National d’Art Contemporain, 2008, p. 75).

The resulting panels oscillate between illusionism and flatness, as each 10-foot canvas appears to be at once a brick wall and a variation of an abstract grid. Between the gaps, glossy pages stand in as the “mortar” and seem to emerge from behind the bricks, when in fact they are pasted on top of the canvas surface. Walker’s cycle of twelve works corresponds to the publication’s twelve monthly issues, as each painting draws from one issue of Domus magazine. The exhibition, then, creates a methodical timeline that spans the entire year of 2012, where each painting acts as an indexical temporal marker and a self-referential brick wall. Walker observed, “I think of the canvas as having a mimetic relationship not only to the wall the work might be displayed on, but also to the structure of the bricks and cinder blocks in the urban cityscape of New York. Outside my studio window, I see various ways these building materials are used – structurally as well as decoratively, stacked both horizontally and vertically” (Kelley Walker, ibid, p. 76).

Kelley Walker was born in 1969 in Columbus, Georgia. In 2007, his work was the subject of a one-person show at Le Magasin – Centre National d’art Contemporain in Grenoble, France, which traveled to the Wiels Contemporary Art Center in Brussels, Belgium. In 2013, Kunsthaus Bregenz in Austria organized Wade Guyton, Guyton\Walker, Kelley Walker, the first joint presentation of the artists alongside their collaborative identity. Walker also participated in other notable exhibitions including Greater New York 2005 at P.S.1 Contemporary Art Center, the 7th Sharjah Biennial and the Whitney Biennial 2006. His work has been acquired by the Museum of Modern Art, Whitney Museum of American Art, Albright-Knox Art Gallery, Institute of Contemporary Art in Boston, Carnegie Museum of Art, and Sammlung Goetz in Munich. The artist’s first American career survey will open at the Contemporary Art Museum St. Louis in 2016. Walker lives and works in New York City.
www.paulacoopergallery.com