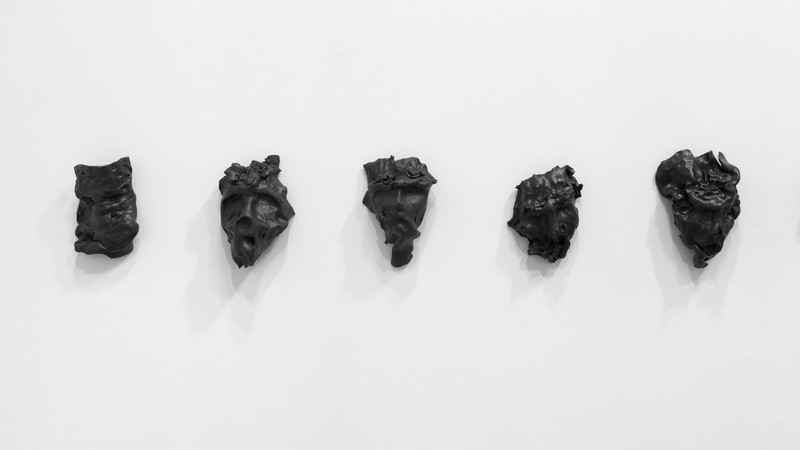 NEW YORK - The Paula Cooper Gallery is pleased to present a selection of new sculptures by Liz Glynn, entitled PATHOS (The Blind Exercises). The exhibition will be on view from September 12 through October 10, 2015 at 529 West 21st Street.

The series is comprised of discretely handcrafted clay masks portraying a breadth of dramatic expressions. In ancient Greek theater, the mask transformed the performer into a character. A single player could trade identities by switching masks, whose exaggerated features revealed the individual’s emotional state and internal psychology. Glynn’s masks echo the historical tradition of these objects of classical antiquity – an exercise that emerges throughout her work as a means to scrutinize contemporary society. Taking its title from the Aristotelian concept of pathos (a quality that appeals to the emotions of an audience and is essential in the art of argument), the series explores themes of artifice and authenticity in the politics of modern performance and persuasion.

Each mask is initially formed through a blind action: a slab of clay is applied to the face of the artist and rudely manipulated. The ‘mask’ is removed from the face and the resulting gestures are pinched and poked to emphasize certain emotive aspects of the improvised form: a furrowed brow, a hollowed cheek, a gaping mouth. The finished masks are fired in a dark matte charcoal tone whose slight iridescent variation contours the folds and dimpled indents of the clay. While the final sculptures refer to an ancient form, the process is very much influenced by the expressive heroics often evidenced in the hand-hewn quality of works by the Otis school of California ceramicists, including Peter Voulkos and Paul Soldner.

Glynn’s work often incorporates performative acts: “As a sculptor, I spend most of my time in the world of production, but as a [viewer], one only accesses the artwork in its finished state. I want to merge the two worlds, and try to forge a continuum between them.” Her performance in the mask series is one of imbedding these emotive signifiers into the clay faces and, as such, she explores the notion of the gesture or trace, evidence of ‘real’ emotion, enacted. The masks extend the richness of classical theatrical pathos into materialized sculpture.

Liz Glynn was born in Boston, Massachusetts in 1981. She received a BA in Visual and Environmental Studies at Harvard University in 2003 and a MFA from the California Institute of the Arts in 2008. Her work has been included in a number of important museum exhibitions including the Hammer Museum’s Made in LA biennial (2012), for which she was named a Mohn Award finalist; J. Paul Getty Museum’s Pacific Standard Time (2013); and the New Museum’s The Generational: Younger than Jesus (2009), curated by Lauren Cornell, Massimiliano Gioni, and Laura Hoptman. Recently, the artist presented a one-person exhibition entitled RANSOM ROOM, at the SculptureCenter, New York (2014), as well as a cycle of performances entitled [de]-lusions of Grandeur at the Los Angeles County Museum of Art (2013). She has enacted large-scale installations and performances for Frieze Projects (2013), Performa 11 in New York, and the migrating public art project, Station to Station. A forthcoming one-person exhibition entitled The Myth of Singularity will be presented at the Los Angeles County Museum of Art from October 31, 2015 through May 22, 2016.
www.paulacoopergallery.com