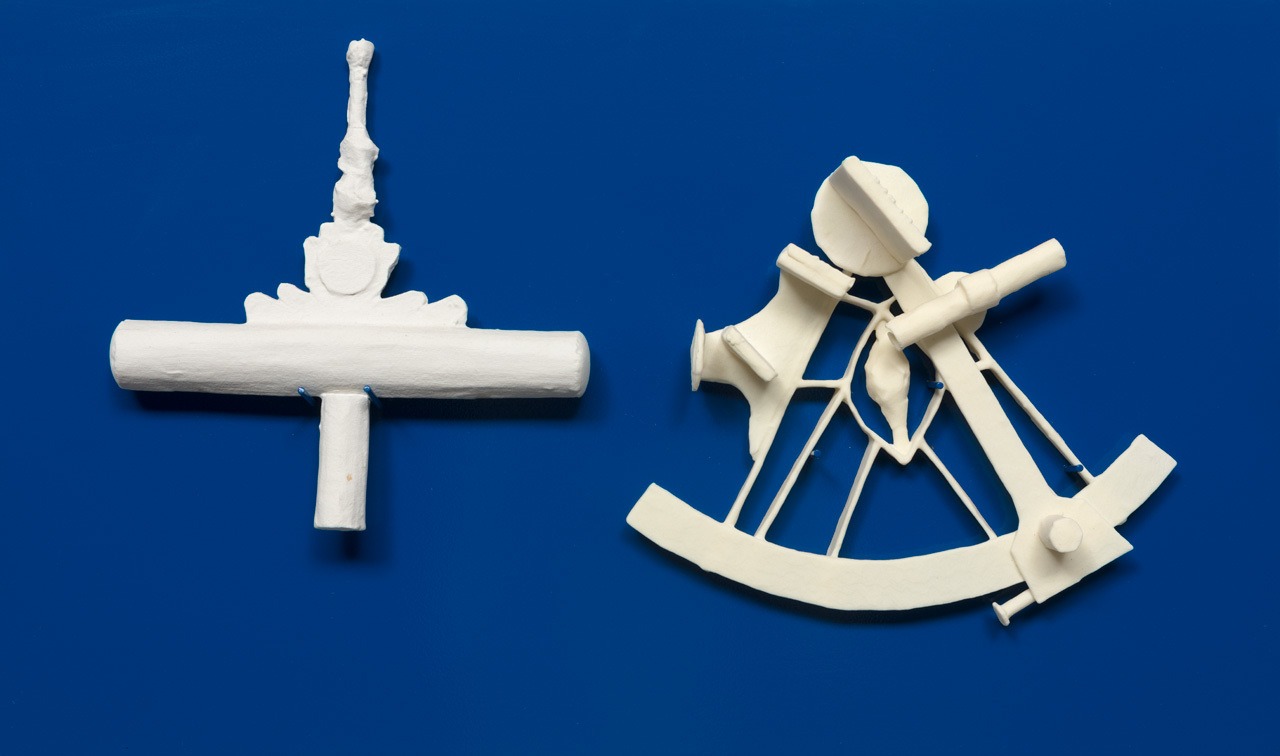 NEW YORK—A selection of Technological Tool Racks by Liz Glynn will be presented in the gallery’s vitrine space at 529 West 21st Street from September 7 through October 12, 2019. For the past decade, Glynn has worked in sculpture, installation, and performance, examining the ways in which cultural objects of the past embody or confront power dynamics, social structures, and systems of value. Begun in 2016, Glynn’s Technological Tool series engages the history of early human technology and material production, challenging the notion of progress itself.

In each of the works on view, a set of related gypsum objects are mounted to a powder-coated steel panel. Primitively sculpted by hand out of paper mache, scanned, and output with a 3-D printer, the ghostly white tools appear in stark contrast to their high-chroma, polished backings. “I almost think of myself as a materialist philosopher,” Glynn states. “I work with ideas through material [...] Every piece has a different process, with different cycles of production.”1 Bearing evidence of their handmade beginnings, the unique works serve as an extension of the body, exploring subjectivity in artistic production. The “tools” are also marked by a second “hand,” as evidenced in the imperfect striations produced by the 3-D printer. Titled with infinitive verbs emphasizing action—such as To Sow, To Cut, or To Write—the works categorize tools, which date from prehistory up to the industrial revolution, according to purpose or methods of productivity. Resembling ossified specimens in a display case, the series invites deliberation on the uncertainty of objects, labor, and authorship in the increasingly virtual world: “What will it be like to make stuff in the digital age, and what will happen to all of the stuff that has been made up to this point in history?”2 Glynn asks. Displaced from their intended functions, the objects become ghosts of their prior forms. In the wake of digital commerce, robotic manufacturing, and the rise of the service sector, the Technological Tool Racks underscore the abstract and capricious nature of value, money and time.

Born in Boston, Massachusetts in 1981, Glynn received a BA in Visual and Environmental Studies at Harvard University in 2003 and an MFA from the California Institute of the Arts in 2008. Unearthed Underground, a major public work commissioned by Bold Tendencies is currently on view in Peckham London and in August 2019 the artist unveiled an ambitious permanent installation at San Francisco International Airport titled Terra Techne. Her work has been the subject of important one-person shows including “The Archaeology of Another Possible Future,” a yearlong exhibition at the Massachusetts Museum of Contemporary Art in North Adams (2017), and “RANSOM ROOM,” at the SculptureCenter, New York (2014). She has enacted other large-scale installations and performances for Frieze Live (2018), Now+There in Boston (2018), the Public Art Fund in New York (2017), Los Angeles County Museum of Art (2013), Frieze Projects (2013), Performa 11 in New York, and the migrating public art project, “Station to Station.” Major group exhibitions include the Hammer Museum’s “Made in LA” biennial (2012), for which she was named a Mohn Award finalist; J. Paul Getty Museum’s “Pacific Standard Time” (2013); and the New Museum’s “The Generational: Younger than Jesus” (2009), curated by Lauren Cornell, Massimiliano Gioni, and Laura Hoptman. In 2016, Glynn served as Visiting Lecturer on Visual and Environmental Studies at Harvard University. She currently lives and works in Los Angeles, CA, where she is an Assistant Professor at the Claire Trevor School of the Arts at UC Irvine.