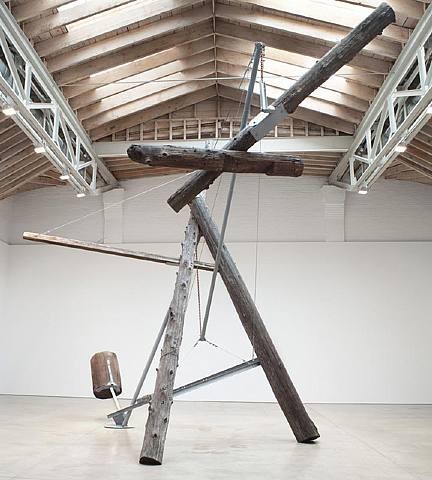 NEW YORK -- The Paula Cooper Gallery is pleased to present an exhibition by internationally acclaimed artist Mark di Suvero, from May 1 through July 31, 2010.
The exhibition presents Nova Albion, 1964-1965, a monumental 24-feet high sculpture made of steel and redwood logs. Nova Albion is named after the white cliffs of northern California that were seen by Captain Francis Drake on June 17, 1579. The California beaches Drake explored are the same ones where di Suvero built this piece using found drift wood logs. In the title, Nova refers to a star that suddenly becomes a thousand times brighter and then gradually fades to its original intensity, and Albion refers to the earliest known name for England.

Also on view are three large, steel sculptures dating from 1998, 2005 and 2006. These simple, cut-out forms called Totems are made from rusted steel plates. The exhibit includes Origins, a 16-foot wide colorful abstract painting from 1978-1982. Di Suvero laid the canvas on the ground and worked from different angles, only stretching the canvas once it was complete. Origins, an important and rare work, has a three-dimensional depth as the contrasting colors pulsate from the wall.

Di Suvero was born in 1933 in Shanghai, China to Italian parents. In 1941 his family emigrated from China to California, where di Suvero received his B.A. in Philosophy from the University of California, Berkeley. In 1957 di Suvero moved to New York, and in 1960 he had his first, widely praised exhibition at the Green Gallery. He later co-founded the Park Place Gallery, an artist-run cooperative where he exhibited through 1967. In 1986 he established Socrates Sculpture Park in Long Island City, NY, converting a previous landfill into a lively exhibition space for artists of all ages and a park for neighborhood residents.

Di Suvero’s distinctive and epic assemblages of steel and wood are in museums and public collections around the world and have enhanced public spaces for decades. He was given his first retrospective exhibition in 1975 at the Whitney Museum of American Art. Other major exhibitions include: Le Jardin des Tuileries, Paris in 1975 (where he was the first living artist to show his work); the Storm King Art Center, Mountainville, New York in 1985, 1995-96, 2005-06 and 2008; a citywide exhibition in Venice, Italy in 1995; the citywide exhibition Mark di Suvero in Paris, France in 1997; Millennium Park, Chicago, Illinois in 2007; and Fairchild Tropical Botanic Garden, Coral Gables, Florida in 2008. Among the awards he has received are the Lifetime Achievement in Contemporary Sculpture Award from the International Sculpture Center, the Public Art Network Award given by Americans for the Arts and the Heinz Award for the Arts and Humanities.
www.paulacoopergallery.com