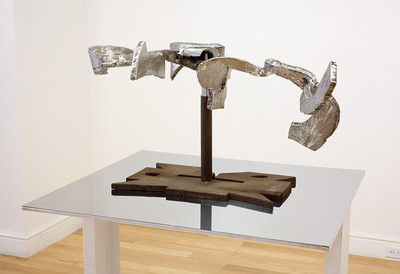 NEW YORK -- The Paula Cooper Gallery is pleased to present an exhibition by the acclaimed American artist Mark di Suvero, from April 30 through June 4, 2011. The exhibition will include three recent sculptures as well as a painting and a group of works on paper.

Though best known for his monumental constructions of steel and other industrial materials, which are installed in public spaces around the world, di Suvero has also created, from the outset, a prolific number of smaller-scale sculptures such as the works included here, as well as paintings, drawings and prints. Kinetic and airy, the recent sculptures on view are knotted assemblages of steel, stainless steel or titanium that best demonstrate di Suvero’s virtuosic twisting, bending, carving out and balancing of metal. Providing a bi-dimensional foil to the sculptures are works on canvas and paper. The artist’s untitled painting from 1979 is a textured expanse of lush color and intricate patterning, and a prime example of his rarely exhibited paintings from the late 1970s and early 1980s. His serigraphs, lithographs and drawings evince his predilection for bold color and sculptural, calligraphic shapes.

Di Suvero was born in 1933 in Shanghai, China to Italian parents. In 1941 his family emigrated from China to California, where di Suvero received his B.A. in Philosophy from the University of California, Berkeley. In 1957 di Suvero moved to New York, and in 1960 he had his first, widely praised exhibition at the Green Gallery. He later co-founded the Park Place Gallery, an artist-run cooperative where he exhibited through 1967. In 1986 he established Socrates Sculpture Park in Long Island City, NY, converting a previous landfill into a lively exhibition space for artists of all ages and a park for neighborhood residents.

Di Suvero was given his first retrospective exhibition in 1975 at the Whitney Museum of American Art. Other major exhibitions include: Le Jardin des Tuileries, Paris in 1975 (where he was the first living artist to show his work); the Storm King Art Center, Mountainville, New York in 1985, 1995-96, 2005-06 and 2008; a citywide exhibition in Venice, Italy in 1995; the citywide exhibition Mark di Suvero in Paris, France in 1997; Millennium Park, Chicago, Illinois in 2007; and Fairchild Tropical Botanic Garden, Coral Gables, Florida in 2008. Among the awards he has received are the Lifetime Achievement in Contemporary Sculpture Award from the International Sculpture Center, the Public Art Network Award given by Americans for the Arts and the Heinz Award for the Arts and Humanities. He recently received the prestigious 2010 National Medal of Arts "for his achievements as one of the most prominent American artists to emerge from the Abstract Expressionist era.”
www.paulacoopergallery.com